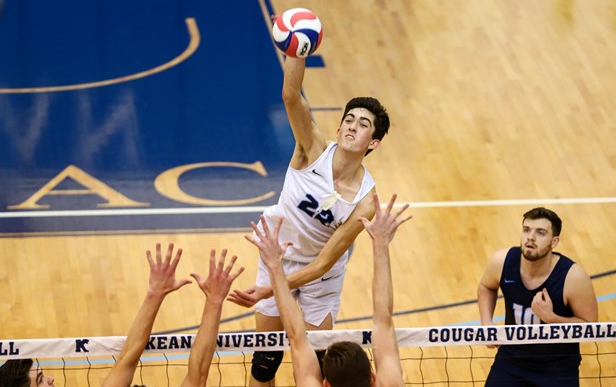 Kean University surprised Rutgers Newark on St. Patrick’s Day taking the last three sets by two points in each set. Rutgers took the first set 25-18 and they appeared to have the confidence that was exhibited the night before as the swept Kean in straight sets for the NJAC Championship.

Jared Ray was on fire once again powering 26 kills on the attack. He has been the Cougars best player thus far this during the shortened Spring season. Seth Russell and Alex Overhoff contributed 10 and 9 kills respectively, and Duncan Beilke knocked down 6 blocks. Derek Au had an outstanding night as well with 43 assists and 12 digs as well as 4 blocks of his own.

Rutgers had their usual stellar performances from Andrew Zaleck (22 kills), Justin Tuohy (51 assists, 5 blocks) and Arvind Kumar (15 kills, 17 digs). Despite Rutgers outscoring Kean on the night overall, the Cougars got tough and gritted out three straight sets to gain the victory.

The teams play twice next week and Rutgers will need to step up if they want to keep their top 10 ranking in the country. The loss gives them a 5-2 record overall and Kean jumps to 4-2. Kean was not ranked coming into this weeks AVCA poll.

Rutgers is likely to drop a few ranks after the loss. It still has high hopes to retain a spot in the D3 tournament which has still not been decided as to whether it will occur as usual due to world conditions.

Next Tuesday and Wednesday’s match will be streamed at https://www.youtube.com/c/raidervision