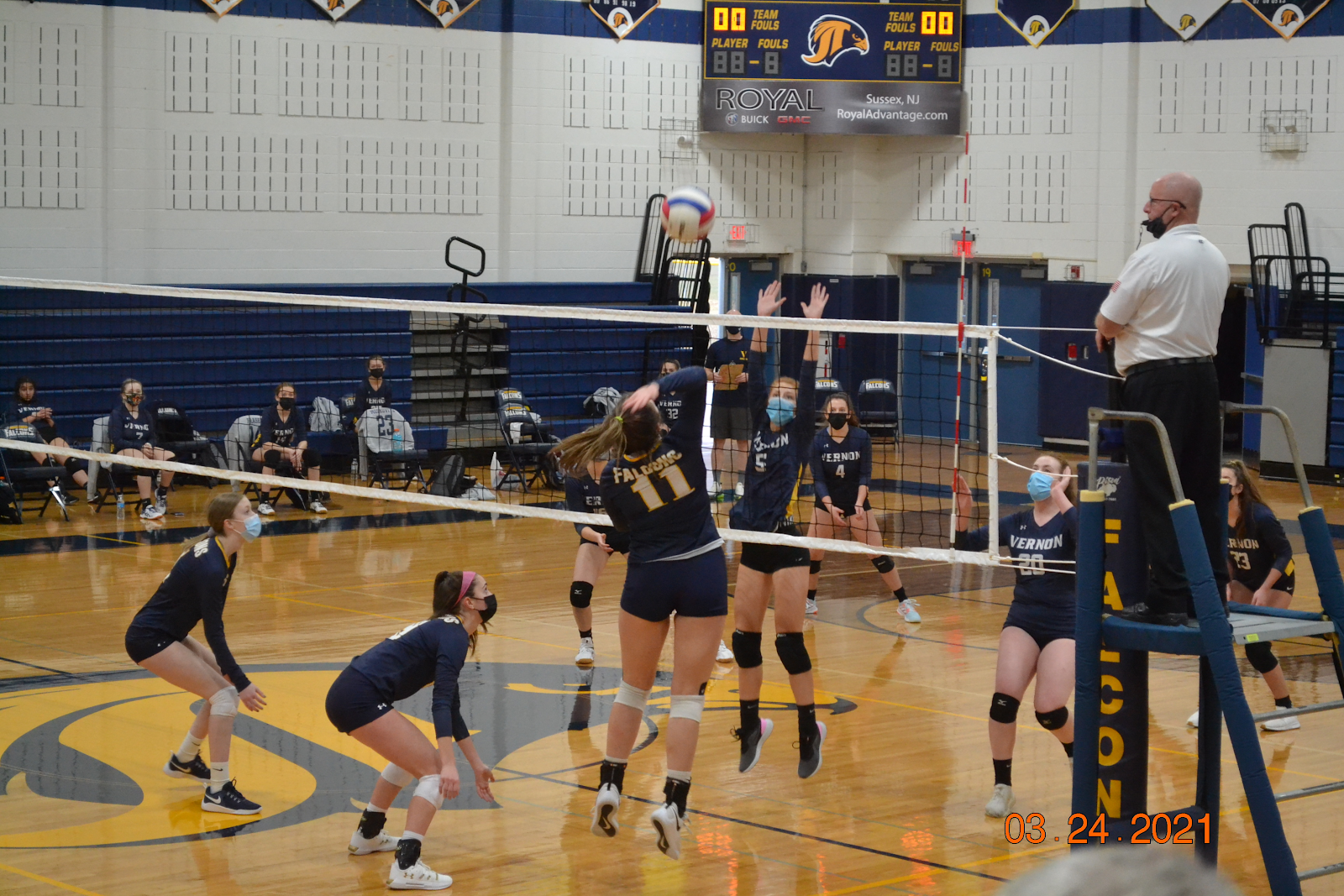 The Jefferson Falcons maintain their trend of continued improvement over the last four seasons. They just keep getting better and better as each year goes by. Last seasons 19-8 record and solid state tournament showing was a great accomplishment. But so far this Spring, the Falcons are 8-1 and riding a wave of momentum that may not ever crash on the shore.

The Falcons have had some signature wins this season taking down Chatham and Hackettstown in straight sets before edging Morris Catholic in a three-set nail-biter. This years team has some outstanding senior players and a nice mix of younger players that have driven their success. Ashley Kish is one of three major senior contributors to this years goals.

Ashley, along with fellow seniors Lauren Liaci and Allie Gesek, have provided the leadership and experience for Jefferson. Ashley, Lauren, and junior Mackenzie Rock have been the go-to players on the Jefferson attack. Junior Emily Carcich has carried the main weight as setter with sophomore Gianna Favata contributing as well. Up and coming underclassman Amanda Nwankwo keeps improving as well.

But Ashley has been a difference maker for the Falcons. She is having her best season of her varsity career and has already nailed 55 kills and 11 aces. She also has shown her versatility by posting 46 digs and 3 blocks as well. Kish, Liaci, and Rock have almost identical stats and have been a consistent trinity of production for the Falcons. Opponents just can’t defend against high level attackers from all angles on the court. It has been a major key to Jefferson’s success and has given Emily Carcich the perfect options to spread the offense.

Number 11 has been honing her skills at the club level at Allegro. The added reps have really raised her game for her senior campaign.

As her high school career winds down, it looks like Ramapo College may benefit from her skills at the collegiate level as a walk-on. But first, she has some business to take care of come playoff time.

Here is our interview with Ms. Kish…

Tell us a bit about yourself, Ashley?

I’m a senior at Jefferson Township High School. I live with my parents (Jennifer Kish, Kevin Kish) and my brother (Jacob Kish). I am committed to Ramapo College of New Jersey, and I am considering attempting a walk-on to their team in the fall of 2021.

I have been playing volleyball for 5 years. I started basic skills clinics in 8th grade, began high school volleyball in the fall of 2017, and began playing club winter of 2018. My mom had inspired me to play volleyball. She played in high school, and hearing stories about her time on the court intrigued me.

I am 5’8” and my vertical is 19”. I played middle hitter for two years, and as of my junior year I switched to playing right side, which is my favorite position. I am a 3-year varsity athlete and a 2-year varsity starter. I play at Allegro Volleyball Club on their 18 Regionals East team.

Tell us about your Falcon teammates. You have some very high-end talent in your starting lineup. What is the current team dynamic? Fun or business?

My teammates are like a second family to me. We have lots of fun in and out of practice, but we also know when it’s time to be serious. All of my teammates are extremely dedicated to this sport, and are always willing to put in 110%. Practice never feels like an obligation to us, the relationships and bonds we have all created makes everything we do so much fun.

NJP considers you as one of the top players in the state. Are you considering playing volleyball at the collegiate level and if so, which colleges are you currently interested in?

I am interested in playing at the collegiate level. Like I stated before, I am definitely attending Ramapo in the fall. I plan on reaching out to the coach and trying out for the team, since I was not recruited.

Jefferson is off to a great start, winning 6 of 7 games. Where do you see the team landing by the end of the season?

I see our team winning our conference for the second year in a row, staying with only one loss on our season record, and going far into states. We have the capability and heart to make it far, and I believe if we keep playing at the level we are playing at right now, our season is going to end on a good note.

Your lone loss this season was to a powerful Sparta squad that remains unbeaten and in the top 10. Despite being swept, you hung right with them to the end. Tell us more about that match.

Our Sparta match was definitely one of our biggest games. The competition was unreal, and I have never played a game so intense. My team left everything we had on the court, and we played to our full potential. We may have lost, but there were so many things for us to be proud of. One of our biggest accomplishments during that game was keeping up with the team that was so difficult for us in past years. During our 2019 season, we lost to Sparta in 2 sets, both scores being 14-25. Now, during our 2020-2021 season, we put up a good fight and kept the scores close, first set being 20-25 and the second set being 23-25. It’s a huge improvement from last year.

Tell us about your current coach Gino Rose…

Coach Rose plays a huge role in our success. During practice, he pushes us to our limits and is always giving us a challenge. He knows how to get us to play in a way that unleashes skills we did not know we had, and that capability makes us the team we are today. His coaching style is calm and understanding, but he makes sure we are always working our hardest. This helps create a comfortable environment for all Jefferson players, helping our team flourish and bond.

I have two coaches that have really helped me during my 4 years of playing volleyball: Coach Rose and Coach Gaydos. Coach Rose has been my varsity coach for 3 years and was my coach when I was transitioning from middle hitter to right side. He was always offering tips and tricks to help me be successful, and stayed patient with me when I was learning how to play a new position. He supported me every step of the way and helped me become the player I am today. Coach Gaydos was my JV coach my sophomore year and he was the one who urged me to bring my volleyball career to the next level. I was not planning on playing club, but Coach Gaydos told me that I would flourish if I were to join. Because of him, I began playing at Allegro Volleyball Club, where all year round I worked on becoming a better player. Even when he was not my coach, he talked to me about my playing and still offered instruction when I needed it. This constant support and encouragement from Coach Gaydos made me grow as a player and is part of the reason as to why I am the player I am today.

My support group is made up of my family and friends. They are always there to cheer me on and congratulate me on accomplishments in my playing. My family (My mom, dad, and brother) attends every game they possibly can, and if they can not make it, they are live-streaming it from wherever they are. Immediately after every game, they are there to praise my playing. Along with my family, my friends are always supporting me during my season. After every game, they reach out and ask how it went and how I played. On big game days, such as Senior Night, they are doing everything they can to show they support me, whether it’s streaming my game or coming to decorate my bedroom.