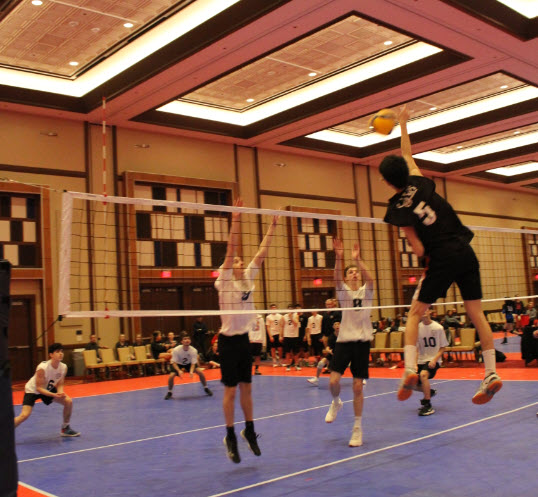 Many high school players who excel at volleyball or other sports are typically very focused on their sport first and their academics second, or use their athletic success to help open doors for academic opportunities. Justin Hong from Ridge has a focused outlook that prioritizes his academics as he has his future as an engineer well planned out. His attendance at a superior level University on the west coast will mean a different approach to volleyball. It will involve the beach and intramurals rather than the NCAA regiment. That doesn’t sound too bad…

But Justin has something else on his mind as far as what is left to accomplish at the high school level and for his volleyball career. He is very focused on the Red Devils returning to the Sectional Finals and beyond. And they may have the team to this Spring to do just that.

Many of the Red Devils are seasoned club volleyball players from CJVA. They have ten upperclassman on the varsity roster and a new varsity head coach, who is no stranger to Ridge volleyball, in Teresa Staats. The wide open 2021 Spring season seems perfectly suited for Ridge in a well balanced Skyland conference that will raise their level of competition and play in every league game.

Hong is off to a jack rabbit start to the season in his first two games. His early Spring success has launched him to the top of the NJP player rater so far in the young season. And we think he has a great chance of staying near the top as the season progresses. As does Ridge. Justin can leap and has a stong swing as well as quickness to the ball. He is not easy to defend and finds a way to get past the block and get the ball down.

This next two weeks will set the bar and be the test for Ridge. They have bundled one of the mostly highly competitive schedules in NJ with upcoming games against Hunterdon Central, SPF, Hillsborough, BR, Livingston and Jefferson, all teams in the NJP top 20. We expect Ridge to be nestled in the Top 10 when the dust settles, with Justin being their go-to outside, leading them on and off the court.

Here is our interview with Justin Hong…

Tell us a bit about yourself, Justin?

Hi! I’m Justin Hong, and I’m currently attending Ridge High School. I’ll be graduating in 2021. In my family, I have my parents, and my sister who used to run track and field and graduated from the University of Pennsylvania in 2020. Recently, my grandma has also moved in with us.

I started playing volleyball in 6th grade, as my middle school had a program. Initially, I didn’t really enjoy it but my dad continuingly pushed me to play volleyball since he played during his high school and college day. I eventually appreciated the speed required to play volleyball at a high level as well as the teamwork aspect, and fell in love with the sport.

I’m 6’0, and I have a vertical of about 34 inches. Throughout my high school volleyball career, I’ve played both outside and opposite, although I do enjoy playing outside more. I currently play for CJVA, where I’ve played a variety of positions, including outside, opposite, and more recently, a little bit of middle.

Tell us about your Red Devil teammates. Who do you expect will be this year’s standout and up and coming players?

I think that this year, Ridge has a lot of great players that all have a lot of potential. I especially look forward to playing with Josh Castner, Liam Harrison, and Ben Grossman, as we played on the same club team where we’ve shown great improvement throughout the season and learned to play together. Further, I look forward to playing with Ross Bancken and Brendan Davy, as they’re key underclassmen that will help power the Ridge volleyball team in the upcoming years.

Recently, I committed to the University of California at Berkeley, studying engineering. Unfortunately, I don’t think they have men’s volleyball program, but I do plan on playing at an intramural level there. Also, it’s in California, so I hope to also play a lot of beach volleyball there.

Your off to a great start averaging 13 kills a match. What are your goals for this year’s high school season?

For me, the biggest goal is for our team to win North 2 again, and show up during State semifinals and finals. I also think that we have a realistic shot at winning Skyland Conference this year, with Bridgewater, Hunterdon Central, Hillsborough, and us all being similar in strength. I think that achieving either of these goals are more important than achieving personal goals.

How far do you feel Ridge will go in Sectionals?

Although North 2 has a bunch of great teams that include SPF, Livingston, Saint Peter’s Prep, I feel that Ridge has a great shot at taking the title once again. We’ve got a solid team here, and I think on a good day, we could knock off the top teams in our Section.

Tell us about your new head Coach Teresa Staats…

With the exception of my sophomore season, I’ve actually worked with coach Staats for multiple years now, since Staats is in charge of the middle school program. I do think Staats does a great job organizing our practices, coming up with drills to work on areas that we’re lacking in, as well as making sure we’re prepared for our games. Coach Staats also makes sure that we’re all ready to play volleyball, whether it be organizing pre-season workouts or making sure we’re stretched out before games.

Your next six games are against top 15 teams in NJ. Where do you expect Ridge to be when the dust settles?

Yeah, our next couple of games are going to be tough. I expect every game to be tight, and wouldn’t be surprised if all of them went to three. With that being said, I think we have a solid chance to win most of the games, if not all of them. At the end of it, I would expect us to still be among the top teams in the state record-wise, while gaining a lot of invaluable experience against the top teams in the state.

My family and I are doing pretty well with the current COVID-19 situation. Actually, we’ve recently all been vaccinated, and with the restrictions starting to be loosened, we’re ready to start getting back to our daily lives.

I think my favorite volleyball story has to be in my freshman year, when I was sitting on the bench for Varsity during the Sectional Games. It was State Section Semifinals against Harrison, down 19-12 in the third set. I just remember it was at their home court, and the Harrison crowd was pretty loud, and thinking “Oh man, the game feels over.” We had just called a timeout two points earlier, but it didn’t slow Harrison down. Then, Senior Chris Lee served thirteen times in a row to win the game 25-19. The excitement during that run was something that I’ll never forget, realizing that we were able to overcome such a large point deficit. That was definitely my favorite volleyball story.

The biggest thing that I do during the offseason is play club volleyball at CJVA. I’ve been playing at CJVA for four years at this point, and have played with various top players in the state of New Jersey as a result. Most importantly, I’ve created relationships with both teammates and coaches, with whom I’ll be looking forward to play against later in the season.

My biggest supporters are my parents. Even though I know that they’re extremely busy, they make it a priority to come to every single one of my volleyball games to show their support, or at least do their best to watch it. I remember for one of my state games my mom was out of town, so my dad livestreamed it through facetime so she could watch our team play. Without their support, there’s no way I would be even close to where I am now.

I think my favorite pro volleyball player has to be Yuji Nishida from Japan. He’s way undersized in the pro scene but has a crazy vertical jump, and isn’t afraid to hit the ball.  On top of that, he’s good. I think that he’s a great inspiration for all volleyball players, that regardless of your height, you can still compete at the highest level and be one of the best volleyball players in the world.

Mendham setter Katie Webber sits down with Josh Wilets to discuss the North 2 Group 3 sectional title, playing in a 6-2 system, and the Minutewomen team makeup for the fall at http://njpowerranking.com https://www.instagram.com/p/CR8CZVGMiPr/?utm_medium=twitter

In life, and especially in volleyball, the ones that are prepared for, and deal with, the unexpected, will likely succeed. Another life lesson from NJP… https://www.instagram.com/p/CRx_yNqBiIc/?utm_medium=twitter

The list of NJ Volleyball college commitments continues to grow. Check out our latest article on http://njpowerranking.com for more details on the phenomenon. https://www.instagram.com/p/CRwv8B2BcCU/?utm_medium=twitter

Yes, we have been equally intrigued by some of the Olympic results in volleyball thus far. Check out NJP’s and our special guests predictor picks for the games at http://njpowerranking.com. https://www.instagram.com/p/CRwdCzbBb2G/?utm_medium=twitter