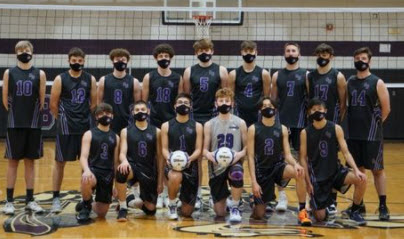 The Old Bridge Knights have been a dominant force these past few years earning two state championships in a row and are gunning for a three-peat. They always have an amazing feeder system and strong players coming up through the ranks. This year has proven no different with a wide variety of talented players rising up on the varsity squad. One of those players is Brian Snook.

Brian is a 6’5″ outside who decided to play club this past year at Warren Six Pack. It was a great formula to hone his volleyball skills and get some on court experience before his senior year at Old Bridge. Brian is now solidified at the outside position and has already put up some monster numbers for the late starting Knights.

So far this season, Brian has played in just 6 games in his career but is averaging almost 10 kills per match. He is an impact first year player that is just what Old Bridge needed to remain on top of the NJ High School volleyball world. Brian and his sophomore cousin Blake Krapf, have assumed both outside positions and are powering much of the early success along with senior Nick Shon (setter), seniors Zach Cuisinier and Aaron LaPlaca at middle, and juniors David Flores and Rob Obdyke anchoring the back row defense.

Brian is one of those players like Colin Stevens of CBA who gets serious about volleyball midway through high school, is a fast learner and exceptional athlete, and ends up making all the difference for his high school team as a senior. We will see if Brian follows in the footsteps of Colin who is playing D1 volleyball this Fall at Sacred Heart.

Here is our interview with Brian Snook…

Tell us a bit about yourself, Brian?

I go to Old Bridge High School and graduate in 2021. I live with my mom, step-dad and my sister.

I have played volleyball since 8th grade but never really took it serious until junior year. My sister played for a little in high school, so I decided to try it out.

I am a 6’5 outside hitter but I haven’t measured my vertical yet.

Tell us about your Knight teammates. Who do you expect will be this year’s standout and up and coming players?

I expect the returning players like Aaron LaPlaca, Nick Schon, and Rob Obdyke to really help the team the most and bring us together. But, Sophomore Blake Krapf (also my cousin) has been outstanding as well and has a nasty serve. All around we just have a fantastic team.

I would love to play in college, but I still need some time to figure that all out.

Tell us about your club experience at Warren Six Pack…

My first year playing club, I was a junior and I was nervous and felt like I was going to be embarrassed because it was just my first year. But everyone was so welcoming, and I knew I was going to have a great season.

You have had a great start to the Spring season thus far with 40 kills in just 4 matches. What are your goals for this year’s high school season?

My goals are to be one of the best players I can be and of course the biggest goal is to win the division then the state championship.

What will it take to get the Knights the opportunity to three-peat?

If we just play like ourselves and we stay together as a team, nobody is stopping us from winning it all.

What is like playing with your cousin on the starting varsity squad for OB?

I love playing with my cousin it really pushes both of us to get better each day especially because we are the same position.

The biggest support comes from my Mom. She really does anything and makes sure she goes to every game, and tournament. She has asked if she could watch practices too.

My favorite volleyball story is watching the 2019 state championship with all my teammates when Old Bridge won their second in a row.

My favorite player currently is Rado Parapunov, Hawaii’s right-side hitter. Every time he hits the ball, he just absolutely crushes it and puts it down.