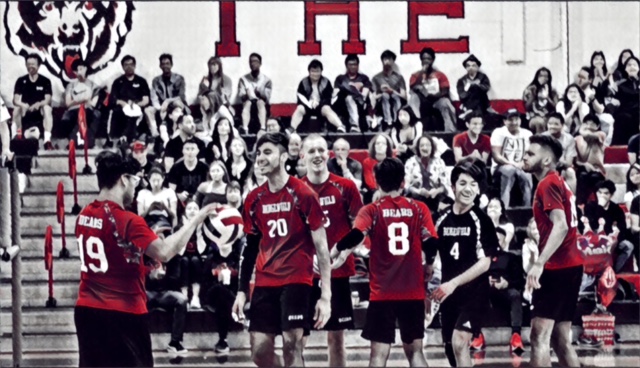 We would like to lead tonight with an important announcement regarding one of the top programs offered from GEVA. The High Performance Program is one that can provide such a rich experience for players this summer. Registration will be closing soon, so take the time to check this out by the weekend. If you’re a player, you will not want to miss this chance to participate and tryout with all the top players in the GEVA region. And for those that get an invite, it’s not only an amazing item to have on your VB resume, but gives you an abundance of visibility from college coaches as well as an opportunity to raise your game playing with the best of the best. General info link is https://www.geva.org/hp. Here is a quick message from Justin Vogues (Men’s Coach/Stevens Institute of Technology Ducks) and John Titus (GEVA Volleyball Associate Director of Player Development/Women’s Head Coach at D2 Caldwell University)

A few premier match-ups tonight on the Wednesday night schedule. We will start with #10 Hillsborough taking on #5 Hunterdon Central. These two top teams faced each other earlier in the season with HC taking it in 3 sets in both teams first game of the season. In that opening game, HC came out on top with a 25-22 3rd set victory. The NJP Predictor made a very similar prediction for tonights game and pretty much hit the target right on the head. The Predictor had it going three sets with HC winning the third set 25-23. And that is exactly what happened. These two teams are so evenly matched. Tonight, they accumulated 70 points each but the allocation by game favored the Red Devils.

Matt D’Alessandro, Avery Gould, and John Harwell each posted 8 kills in a balanced attack for Central. Will Kwietniak had 3 blocks and Tom Menyert had 2 blocks and they added 4 and 6 kills respectively. Gavin Lefebvre posted a whopping 34 assists as well as 13 digs and Danny Albano led the team with 15 digs. HC is deep and talented and very deserving of their 10 ranking. As even as the teams are, Hillsborough in constructed a bit differently. We just love the combination of outside Vin Shah who is already over 100 kills this season and 6’8″ middle Jack Freese who is having a breakout year and is just a junior. He will be a major force next season for the Raiders.

Second on the premier game list is #9 Kearny against #15 St. Peter’s Prep. This is a major Hudson County rivalry in every sport played but especially in volleyball over the past five years. Kearny is on a mission this year. The boys have been working out on their own at the local grass field through COVID and pre-season and have really gelled early in the season. They were undefeated entering tonight’s match with SPP. St. Peter’s has constructed their schedule a bit differently than Kearny. Kearny has remained in Hudson County for the most part and has built a ton of confidence playing lesser ranked teams. They added Union and Hackensack to their schedule and beat them both. It is unlikely that they will lose on game on the rest of their regular season schedule and should enter Hudson County tournament play as the undefeated first seed. Peter’s went in a different direction. They have played many top tier teams such as #2 CBA, #10 Hillsborough, #17 Bergenfield, #11 West Milford, #25 St. Joe’s Metuchen and now #9 Kearny. Their record reflects this as well at 6-5. We caught most of the livestream and it was a truly fun game to experience. It was a very back and forth battle and then Prep got out to a 20-15 lead in the first game. Kearny was persistent and powered by Santi Lopez’s offense and Kevin Chalaco’s defense scraped their way back to tie the score at 22-22. Kearney rallied for a 25-23 win and set the tone for game two which was super close early and the Kardinals again rallying at the end to win 25-21. Lopez finished with 8 kills and Nathan Aguilar had three blocks. Aidan Apito led the Marauders with 10 kills.

#8 Rancocas Valley and #40 WWPS squared off tonight in a battle of two undefeated teams. Rancocas just overwhelmed the Pirates and won in straight sets. Paolo Columbo was the star of the show tonight posting a team leading 6 kills, 3 aces, and a block. Ryan Martin had 5 kills and Josh Milke had 3 kills, 13 assists, 2 aces, and a block. RV is now 9-0. This Saturday, they added #1 Southern to the schedule and will be traveling to “Ramville” to face NJ’s #1 team. Should be a very interesting match-up and one to mark on your calendar for the livestream… link here… https://www.youtube.com/channel/UCnQTtbvDjcuwl52aHyPoNhg

For the last few boys seasons, Wayne Valley has put out quality, well-coached teams that are always highly competitive in the Big North. This Spring season, Valley got off to a very slow start against some tough teams and found themselves at 0-4 with close losses to #13 Fair Lawn, Lakeland, #11 West Milford, and an improved #32 Wayne Hills. They are starting to turn their season around and have now won 3 of their last 4 including a surprising victory over #17 Bergenfield today. The 8-1 Bears battled to the death here winning the first game 26-24 but then getting hammered 25-18 in the second. They came back in the third game but Wayne Valley got the final two points to win 25-23. Jakob MacDonal had 7 kills and a block and Ammer Coubati and Andrew Teicher had 5 kills each for the Indians. Justin Pauli and Nick Gonzalez had 9 kills for the Bears. Gonzalez added 3 blocks and Jacob Pascual had 23 digs. After winning their first 8 games, the Bears have dropped their last two and have two games with Paterson Eastside next with one of the states top attackers junior O’Shamair Majette. Majette has 111 kills in 9 matches this season.

Bayonne leveled their record at 3-3 by defeating rival Harrison in three sets. The Bees posted 48 digs in the match with Xavier Sylvers, Sebastian Zegarra and Alex Zinkevich-Khrapichez with 10, 12 and 14 digs respectively. Alex also led the team with 9 kills and 3 aces. Harrison falls to 3-4.

The cousins strike again for #4 Old Bridge with Brian Snook smoking 12 kills and Blake Krapf jamming 7 kills and an ace for Old Bridge as they coasted past #33 JP Stevens tonight 25-14, 25-17. Eighteen assists for Nick Shon. The Knights are now 8-1.

Colonia edged past America’s best 0-8 high school volleyball team Piscataway in three sets. Mike Howell and Steve Miller had 13 kills each and Andrew Lukaszewski had 17 digs and 2 aces. 30 assists for Sneh Shah who also had 8 digs, a block, and a kill. Mike Mcsorely had a great game as well with 7 kills, 6 digs, and 9 assists.

Edison is now 6-3 with a tight 25-23, 25-23 win over Iselin Kennedy. Twenty-eight big digs from Srivitesh Vepuri and Chinmay Mosur had 8 kills, 2 blocks, and three digs.

(7-1) West Milford faced (8-1) Don Bosco today in a game that really showed the strength of the Highlanders. We expected a very tight match as DBP has been mowing down opponents all year in the Big North with their one loss to a top 20 team in Bergenfield. But Thenell and Christ once again dominated the tempo and the attack and West Milford cruised 25-15, 25-14. We expect West Milford to be near the top of the North 1 sectional grid come state playoff time.

A quick heads up that we do not have the resources to include every game of the night in our blog coverage. We try to spread our coverage to as many teams as possible with special highlights for playoff contenders and top 40 teams. If there are some interesting player stories or individual milestones met for a career or a school, please give us a heads up by emailing njpowerranking@gmail.com.

NJP put out an analysis post today looking at the make-up of varsity volleyball boys by class year as well as a look at some of the top sophomore and freshmans. Some cool stats to check out at https://njpowerranking.com/2021/05/04/boys-volleyball-class-year-report/

We so appreciate correspondence from many of our fans. Many times we get feedback from some players, parents, or teams who will try to convince us to move teams up in the rankings or give us more details about their teams. We really appreciate this and it certainly helps with our blogs and other posts for the site including our player interview targets. But our ratings and rankings are all math-based. It’s pure analytics based on statistical analysis and proprietary algorithms. It is an unbiased look at the teams and players and offers zero subjectivity in regards to individuals who contribute to teams outside of statistically. We can’t measure leadership and spirit and many other factors that contribute to a players unique qualities. It’s a very flawed system. Our player rater is just a compilation of stats expressed in a fair system to weigh factors that we feel represent grading data. Sort of like an SAT score so to speak. We feel the rankings and ratings are qualified by the success of the game predictor. Especially for a high school environment with so many factors like injuries, players missing games for work, homework, proms, school events or other conflicts, and 15-18 year old boys who can be carrying the weight of the world on their shoulders because of a relationship, bad grade, or parent argument. It’s a slippery slope. But most of all, for us anyway, our site is hoped to be a place where players and parents can just have some fun reading about a game they have a passion for, read a social media post that can make them laugh or giggle for a moment in time, and be a respite from a challenging world that has tested them more in the last year than ever before. That’s the goal anyway. All feedback is welcome at njpowerranking@gmail.com.

A new ranking is out as of Sunday. You can access here if you have not done so already… https://njpowerranking.com/2021/05/02/njp-boys-hs-volleyball-ranking-2-may-2nd/

A new player rater came out as of Sunday, also. You can access here if you have not done so already… https://njpowerranking.com/2021/05/02/njp-boys-hs-volleyball-player-rater-as-of-5-2-21/

And lastly, a new sectional ranking is out as of Sunday. You can access here if you have not done so already… https://njpowerranking.com/2021/05/02/sectional-rankings-for-all-teams/