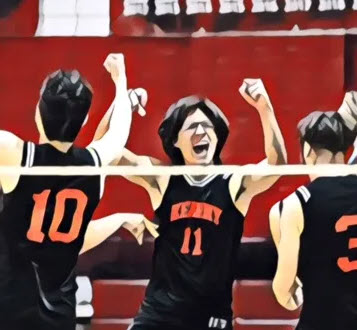 Welcome to the NJP Boy’s Blog for the evening of 5/6.

Next Friday is the state cutoff, so keep the following in mind…

The 12 game minimum rule hit us like a punch in the stomach this morning when we were reviewing the NJSIAA rule. There may be a mad scramble this week to schedule more games from teams trying to meet the game number minimum to qualify. And also create enough wins to get by the 50% threshold. We have to trust that the NJSIAA has something in the works to reduce or eliminate this rule. We are living in extraordinary times and our respect for the NJSIAA has gone up even further (if that’s possible) during the past year. Hopeful for some news soon.

#2 CBA kept their unbeaten streak going and still have yet to lose a set this season. They are 8-0 and beat Howell for the second time this year. The usual swagger from the Colts with 11 kills from Dooling, Colin Stevens with 27 assists, 9 digs, 3 kills and 2 blocks and normal cast of Crosby, Doehner, Mayeregger, Sasso and Kwapniewski with solid efforts. Howell drops to 2-3 but kept it close once again getting to 22 in game 1. Read more about the Rebels and their star player Jake George at https://njpowerranking.com/2021/05/06/howell-senior-jake-george-fuels-rebels-fire/

Cherry Hill East is one of those teams that can surprise come playoff time. They are 5-4 after tonight’s win over Camden Charter. They have beaten Paul VI and Washington Township already and went to three sets with top teams Rancocas Valley, Williamstown, and Eastern. Senior Owen O’Connell has been on our target list for a player interview for a while now. He averages close to 10 kills a match, is a great beach player, and one of the prize recruits of this years senior class still waiting to commit. Ansh Mehta at middle has had a great Spring with 50 kills and 8 blocks. And Justin Szeto, just a junior, is near the top of the assists leaders in NJ. Big test for them tomorrow against Moorestown is sure to be a great game.

Jackson Memorial is now 7-0. They beat Toms River North in straight sets today. They limited North to just 3 kills for the match. The Jags are playing well and at the top of their game. They face #1 Southern on Tuesday 5/11 and then again on 5/13 to complete the home and home. Stay tuned!!!

Another nice night for Nick Brzoska at Marlboro. The Mustangs are now 7-2 and Brzoska is nearing the 100 kill mark and is sitting 5th in the state currently. Marlboro has two big games coming up next week against CBA on the 11th and 13th.

Livingston junior Chris Lynum is back in the line up after missing a few games due to injury. He is weaning back in and appears to playing some back row before returning to jumping at outside hitter. The Lancers beat Ridge anyway on Tuesday and they manhandled Millburn tonight in straight sets. Kellan Sun has stepped up in Lynum’s absence. Sun had 18 kills tonight for Livingston. Super performance for the junior Lancer.

#1 Southern cruised again today to an easy victory over TRS. 16 different players got in the match for the Rams. Senior Dylan Bates blasted 8 kills for Southern, leading them in that category for the night and providing all the offense they needed. Matt Leonard had 13 assists and 2 digs also for the Rams.

Arnav Deshpande and Anish Dhokte provided the offensive attack tonight for South Brunswick who ran past Iselin Kennedy 25-11, 25-15. The Vikings are now 6-3.

Abdullah Elsayad had 7 kills, a block, 6 digs and 4 aces as he powered Pinelands past Jackson Liberty. The Piners punched the NJP predictor in the jaw and knocked him out in the first round after NJP picked Liberty to take this one. Pinelands is now 8-2.

Bergenfield returned to their winning ways with a straight set win over Paterson Eastside. Junior Powell Areeckal had the best game of his high school career notching 4.5 blocks and 4 kills for the Bears. Justin Pauli led the team with 8 kills and Josh Saavedra and Jacob Pascual had 5 aces each. Bergenfield is 9-2.

Ridge took their 5th loss as Jefferson earned a statement win beating the Red Devils in 3 sets. Despite Justin Hong’s 17 kills, Shane Conley answered with 14 of his own in addition to 2.5 blocks, 15 digs and an ace. Auston Obsuth had 12 kills, 12 digs and 2 aces and Andrew DuHaime had 32 assists, 3 aces, 2 kills, 1.5 blocks, and 9 digs. The players from GSE are having excellent years as Jefferson is now 7-1. Jefferson beat down the NJP predictor like a rented mule.

Lacey is playing really well right now and picked up another win tonight vs. Manchester Township, The Lions are now 8-2. Five blocks from Anthony Cooper and 8 kills from Baxes James supported Kyle Coburn’s 22 assists. A very nice game from Carson Howard who had 5 kills, and 3 blocks.

Eastern and Paul VI entered their match today at 5-1 records in a battle of Olympic conference rivals. This one ended in three sets with Eastern coming back after losing the first set to win sets two and three 25-20. Eastern got 12 kills from Hemil Patel and Isaac Master added 11 kills and 3 blocks. Raffaele DiCapua had 12 kills, 4 aces and a block for Paul VI.

The GEVA High Performance Program is one that can provide such a rich experience for players this summer. Registration will be closing soon, so take the time to check this out by the weekend. If you’re a player, you will not want to miss this chance to participate and tryout with all the top players in the GEVA region. And for those that get an invite, it’s not only an amazing item to have on your VB resume, but gives you an abundance of visibility from college coaches as well as an opportunity to raise your game playing with the best of the best. General info link is https://www.geva.org/hp. Here is a quick message from Justin Vogues (Men’s Coach/Stevens Institute of Technology Ducks) and John Titus (GEVA Volleyball Associate Director of Player Development/Women’s Head Coach at D2 Caldwell University)

NJP put out an analysis post this week looking at the make-up of varsity volleyball boys by class year as well as a look at some of the top sophomore and freshmans. Some cool stats to check out at https://njpowerranking.com/2021/05/04/boys-volleyball-class-year-report/