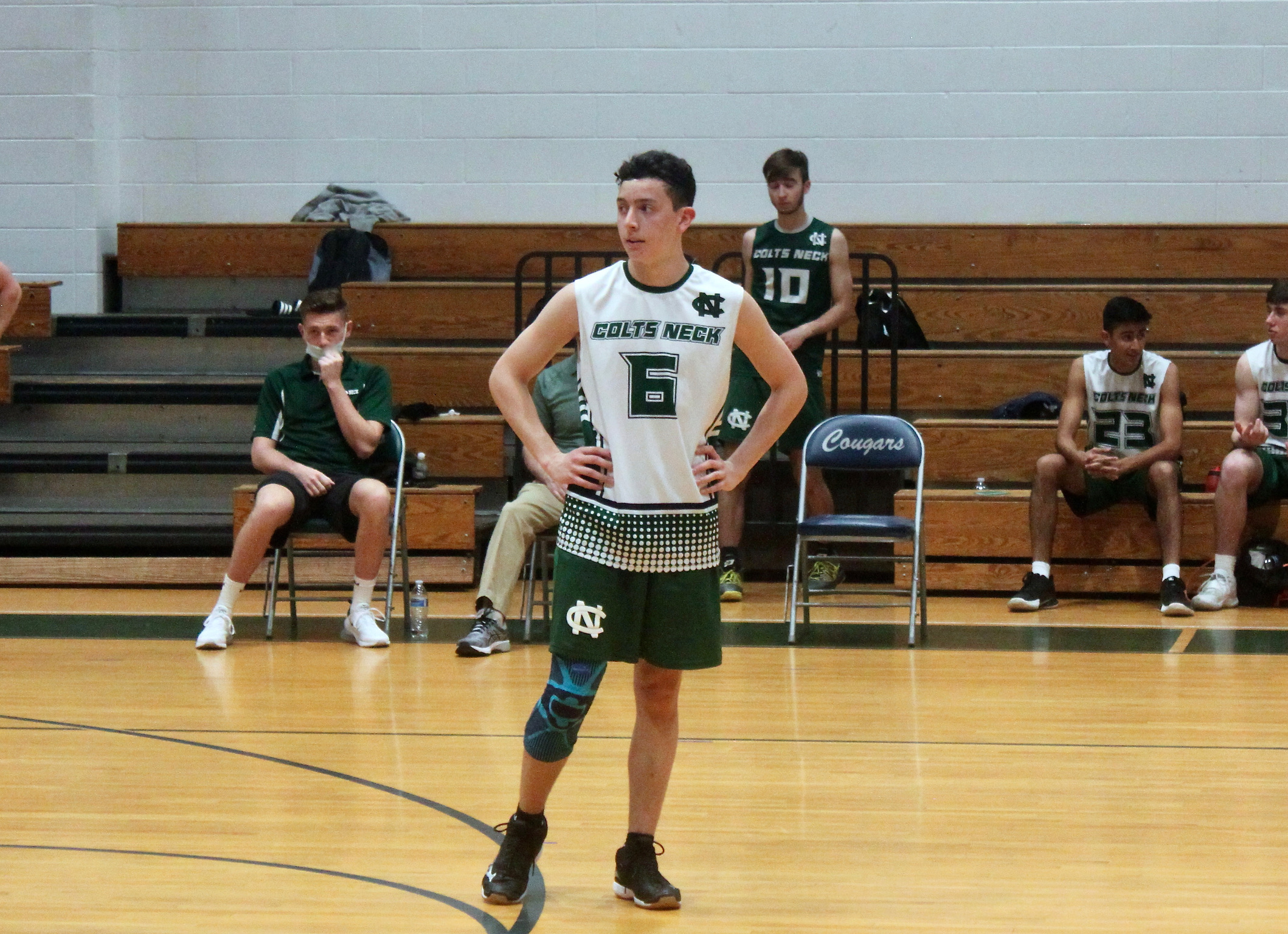 Junior Mauricio Catalan stepped up into a major role as setter for the Colts Neck Cougars this year and has handled the transition without a hitch. In fact, in the last NJP Player Rater of 5/2, he was ranked 4th in the overall player rankings. The combination of Mauricio and senior James Pridmore has been one of the best setter/outside hitter duo’s in the state. You can tell that Catalan is getting more comfortable and efficient as each game goes by.

Colts Neck has had an outstanding season thus far. They have 6 wins and just two losses, and those two losses were to two quality teams in Jackson Memorial and Marlboro. They remain undefeated in the Shore B division.

They also have some other talented players on the squad including senior’s Sean Mahoney, libero Ryan Tweedale, and middle Gavin Thor. Thor leads the team in blocks with 18, Tweedale has 133 digs, and Mahoney has 45 kills, 41 digs, 6 blocks and 4 aces for the year thus far. Mauricio has some great stats including 168 assists and 13 aces. And Pridmore has 72 kills and 95 digs, and is one of the most versatile hitters in the conference.

Catalan is a smooth operator at setter and doesn’t hesitate in putting the ball down himself. He is a solid jumper and runs the offense with multiple weapons to feed. Mauricio relishes the opportunity to read the defense, make quick decisions, and give his team the best chance for success on any given point.

Mauricio’s beach experience as well as having two parents that have played for decades has aided his development as one of the top setters at the shore. He has much to look forward to for his senior year nexct season as he will have a chance to dominate.

Here is our interview with Mauricio Catalan…

Tell us a bit about yourself, Mauricio? (What school do you attend, what town do you live in? What year are you graduating? Tell us about your family? etc.)

My name’s Mauricio Catalan. I’m currently a junior at Colts Neck High School and I play setter for the team. I grew up in Chile and moved to the US prior to starting 9th grade. I live with my parents and two siblings in Freehold and I’m graduating in 2022.

My parents have played volleyball, both beach and indoor, for most of their lives so I’ve always been exposed to the sport, however I never really gave it a real try up until my freshman year at Long Branch. I made varsity for that team and shortly after the season ended, I was invited to participate in Warren Six Pack Volleyball Club. This all quickly grew into a passion of mine as I was quickly getting more and more interested in the sport and was excited  to play. I’ve been playing volleyball for 3 years now both indoor and outdoors and I feel like more recently as the current season started something finally clicked for me and I’ve gotten more confident on the court and I’ve become better as a player.

I’m now 5’10” and I had a 33 inch vertical last time I checked. Although I’m usually not the tallest player, I make up for it with athleticism and timing. My favorite position to play  is setter because I like being involved constantly in the game and it comes natural to me. Although I mostly play as a setter, I’m a pretty well rounded player and I can play basically any position in the court. As a secondary position I prefer to play outside hitter which helps my overall skill. When it comes to clubs, I play for Warren Six Pack and I’m excited to start going to tournaments again after a complicated year due to the pandemic.

Tell us about your Cougar teammates. Who do you expect will be this year’s standout and up-and-coming players?

I just switched to Colts Neck this past year but since the first day I felt welcomed. Especially now more than ever I feel more confident when playing mostly due to theirs and my coach’s support. Most of our varsity team is composed of seniors with some of the standouts being outside James Pridmore, middle Gavin Thor, opposite Sean Mahoney and libero Ryan Tweedale. Two up-and-coming players that I expect to be key for the team next year are sophomore Will Zurdez and junior Rayan Rehman.

I would love to play in college but I haven’t decided yet. I’ll probably make this decision moving forward on my senior year but I’m now inclined towards studying physical therapy and sports science. Even if I don’t get to play in college, I will probably remain active after my high school career.

You and the team have had a great start to the Spring thus far, the team is 6-2, and you are leading the way with 168 assists.  What are your goals for this year’s high school campaign?

As a personal goal I would like to just keep getting better all around as a player and as a team our goal is to mainly play as best as we can and have fun while doing it but also winning our division and making it far into playoffs is not a crazy thing to say.

Tell us about your Coach Greg Hope.

Coach Hope has since day one been a great influence. He loves the sport and is always pushing us as a team to get better everyday and improve our skills. I feel like a have a strong player coach connection with him which translates into the court and will help for the seasons to come.

You and teammate James Pridmore are right near the top of the NJP player rater. How far can that combination take you in the playoffs? Do you think Colts Neck can go to the Sectional final?

James and I have had a good in and out of the court chemistry this past months which shows during games and in the stats. I believe this combination will take us far into the playoffs as these attacks keep getting better every practice and game. I think anything is possible if you work hard enough for it and Colts Neck can for sure go to the Sectional Final if we play our best during games. We have a pretty solid team this season and as long as we play how I know we can we could go far.

During the offseason and basically all year round to prepare for the following season and keep myself occupied I play beach volleyball, usually tournaments on the weekends or pick up games every other day during the summer. I also play club along with other indoor volleyball leagues during the offseason. I do cross country on the fall to stay in shape after summer and I used to play basketball in winter but I decided to stop that in order to focus on volleyball.

My biggest supporters are my parents. My dad Andres and my mom Barbara. They go to every one of my games they can, they are the reason that I joined the sport for, I still play with them every weekend, and they support me with everything that I do. They are the ones that mainly set the foundations and helped me become the player that I am today.

Some of my hobbies include paddleboarding, mixed martial arts, traveling, photography, and I like to have fun and hang out with friends and family.