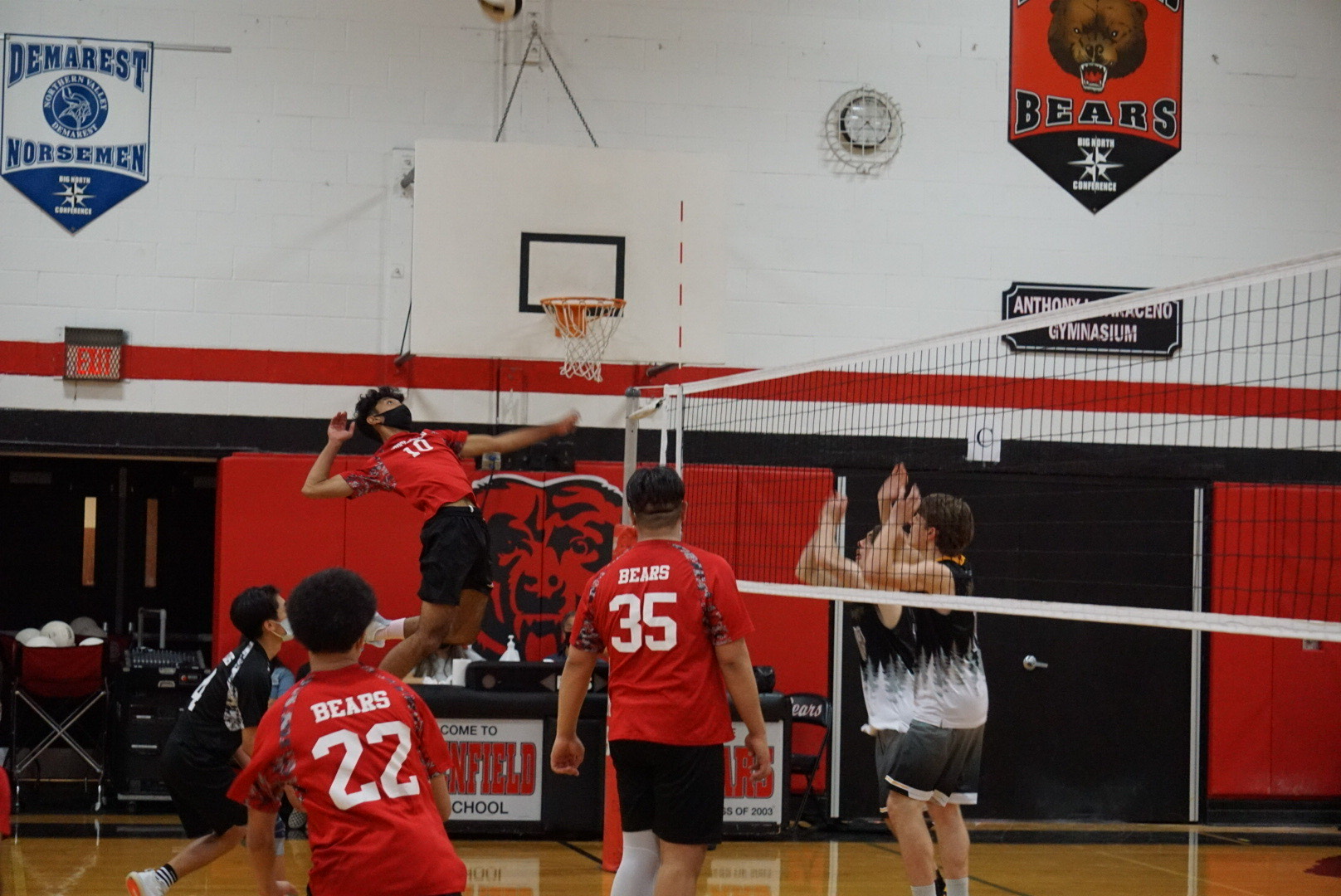 The Bergenfield Bears got off to a great start to the Spring high school season. Thy won their first 8 games of the season beating some pretty formidable opponents including St. Peter’s Prep, Don Bosco Prep, and Hackensack. They are now 10-2 and in a great position for both county tournament seeding and their state sectional. The team is solid, has a winning spirit, and has many tools in it’s case to bring to the table for the playoffs.

Leading the way on the offensive attack is senior outside Justin Pauli. He is nearing the 100 kills mark for the season and has made a major impact for the Bears on both the offensive nd defensive sides of the court. He has contributed 44 digs and 2.5 blocks but also has had 26 aces through the 12 matches on a team that leads the state in aces this Spring.

The Bears have one of the best blocking teams in the Big North. They have two middles with over 30 blocks on the season, Bryan Lizarazo and Nick Gonzales. In addition to Justin at outside, they have Masa Hamada at the other outside position who has put up 47 kills, 45 digs, and 27 aces. Jacob Pascual has been a monster on defense with 130 digs and he leads the team with 37 aces. Kenrick Edmonson has had an awesome year as well at Opposite 20 kills, 39 digs and 23 aces. Arif Ali sets for the Bears and has put up 131 assists while junior Powell Areeckal has supported with 44 assists as well. This is a well rounded team with versatility and a hunger to succeed.

Justin has a smooth style and glides when transitioning to and approaching the net. He gets power on his swing leveraged from his lanky build and arm speed. He also provides leadership and contributes to the momentum that builds from the outgoing and boisterous style of the Bears on the court.

The Bears have high points for a long run in the North 1 sectional. When their energy is sizzling, they can compete with just about any team in the state. Justin is ready to lead and bring this team to even greater heights in the weeks to come.

Here is our interview with Justin Pauli…

Tell us a bit about yourself, Justin?

My name is Justin Pauli and I am a senior of the class of 21 at Bergenfield High school in Bergenfield, New Jersey. My household family is small as I’m an only child living with my mom and dad. However, my cousins play a strong part as not only my family, but my #1 supporters.

I’ve been playing for about 4 years now as I started freshman year as a middle on the freshman team. Initially, I had not been involved with my school my freshman year and I sought out different opportunities. Volleyball would be my first sport and I don’t regret it. Ever since my sophomore year after being on the bench, I was inspired by my graduated teammates who committed to college volleyball opportunities at D3 College of St. Elizabeth: Kodi Peters and Angelo Calayag. I strived to improve my skills by finding any opportunity to play by playing outdoor or renting out gyms.

Tell us about your Bear teammates. Who do you expect will be this year’s standout and up and coming players?

This year we have a strong arsenal of players. We have a variety of options for attacking from guys like Kendrick Edmondson (O) and Masa Hamada (OH). Both are juniors playing their first varsity seasons and missed out a year due to covid, but they are strong nonetheless on offense and defense. In addition, we have David Ozarco (OH) and Powell Areeckal (S) who are young and upcoming who also have a lot of talent. Arif Ali (S) is our senior setter who is also a strong asset to our team. When it comes to our defense, we have the backbones of our defense Jacob Pascual (L) and Jonas Palis (DS) and big blocks at the net from Nicholas Gonzolaz (M) and Bryan Lizarazo (M). I think Masa Hamada stands out well among our team as he is a reliable, smart outside and strong passer and Jacob Pascual for being one of the best passers on the team.

You and the team have had a great start to the Spring thus far, the team was undefeated, and you are leading the way with 71 kills and 22 aces. What are your goals for this year’s high school campaign?

Our goal this year is to first win our league and progress through our division and reach the ultimate goal of winning state finals. In addition, I’m almost at my goal of 100 kills before the end of the season.

Unfortunately, I don’t plan on playing in college. However, I will play intramural volleyball if I have the opportunity to or if I can find a club in New Brunswick. I plan on attending Rutgers University at New Brunswick to study nursing.

Do you think Bergenfield can go to the Sectional final?

Tell us about your Coach Matt Baumuller.

Coach B is a compassionate coach that brings an energy to the team to encourage and fire us up for every game while easily adapting within our environment. On the court, he is very expressive in order to motivate all of us mentally. He strives for improvement in his players as he is a great one on one person. Nonetheless, he is a great coach who will aid us to our goal of states.

I think it’s important to recognize all the coaching staff at Bergenfield. Coach Powell coaches a strong girls team at Demarest. Her high volleyball IQ and experience has influenced so much in me since freshman year. She was my freshman coach and now the assistant coach on varsity. A new addition, Coach Chu, is the new boys freshman coach and the girls varsity coach. She comes in from time to time to help us improve our skills individually and is going to be a great help on the Bergenfield coaching staff.

Most of my motivation stems from my family and my team. My team holds the same goals as we work hard to pursue them and make states come true. I play volleyball in order to make others proud especially my family as they will support me no matter what.