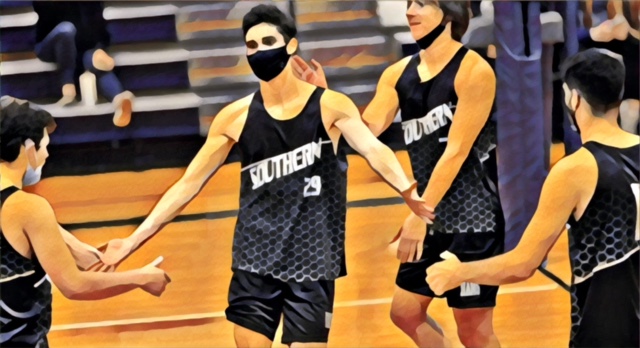 Did you sign up for GEVA High Performance? Ok… just checking.

#2 CBA, hot off their big win over Southern on Monday, took on a strong Marlboro team on Tuesday. Marlboro has ramped it up these past two weeks and other than a loss to Wall, has been red hot, winning 6 of 7 coming in to Tuesday match-up. They were hoping for a letdown game that many teams experience after getting a win in a game that had top billing for the week. And the script for that looked real when Marlboro with Dan Marino and Nick Brzoska took the first set in a convincing manner, 25-20. It was the first set that CBA has lossed all year. Colin Stevens took his queue and stepped up once again this season as he mounted the comeback posting 28 assists, 5 kills, 3 blocks, and 4 digs. He evenly orchestrated the attack feeding kills from all over the court inluding 4 from Doehner, 6 from Dooling, 5 from Kwapniewski, 7 from Mayeregger, and 6 from Sasso in as balanced an offensive scheme that you will see. The Colts took the last games 25-12 and 25-22 as the third set thriller went right down to the wire. Marino had 14 kills for Marlboro and Brzoska added 12. Nick Chatzopoulos had 16 digs for the Mustangs as well. Brilliant volleyball by both teams. We can’t wait to see them match up again. The good news is they play again on Thursday. Strap in.

#3 Southern had yet another undefeated team to contend with today as they took on the Jaguars of Jackson Memorial. Much like the CBA game, Southern dropped the first set, and then came back to win both the second and third set with the final going 25-22. Thrilling mid season volleyball happening at the shore these days. Southern bench wore down the starters of the Jaguars who all had impressive performances. Ben Fryc posted 12 kills, Konrad Bieniek had 9 kills and 9 digs, and Nick Petrow added 9 kills and 4 digs. Destan Llolla had 31 assists along with 2 kills, a block and 5 digs. Southern rotated 12 players through the stat sheet and got contributions from everyone. Tommy Deakyne provided his usual leadership with 8 kills, 7 digs and a block. CJ Schmidt had a whopping 6 blocks for the Rams and Ethan Case had an awesome defensive game posting 24 digs. And yes, these two play again Thursday as well. Crazy comparison to CBA…

Nice to see junior outside hitter Chris Lynum back and firing on all cyclinders. He has 30 kills in the last two games since retruning from an ankle injury. Tonight, he led Livingston a straigh set manhandling of Belleville. Kellan Sun was stellar during the time Chris was out as he has really continued to raise his game. The Lancers are now 8-1 and are sure to be a top contender in the North 2 sectional.

Gloucester Tech is now 11-2 after putting away Cinnaminson 25-15 and 25-14. The future West Point Cadet Preston Forchion had another impressive outing posting 4 aces, 7 digs, and 7 kills. Go Army!! THANK YOU PRESTON!!!

Harrison (6-5) pummeled winless Paterson Charter today to give them a leg up on qualifying for the state tourney. Senior Albert Ruff had the best game of his high school career posting 12 kills and 2 blocks. The middle now has 71 kills on the season in 11 games.

A big shout out to the Randolph Rams. Their first year varsity program has really excelled. Their 5-3 record positions them to qualify for states in the first year if things fall into place this week. Tonight, they took on a powerful Jefferson squad who is ranked in the top 10 and entered the game at 8-1. They hung with them the entire match posting 22 and 21 points in the two sets. And Jefferson needed 51 digs to fight off the Rams. Another great game by Shane Conley who had 10 kills, 13 digs, and 4 aces. Andrew DuHaime had 25 assists, 9 digs, and 2 kills for the Falcons who imprioved to 9-1.

We have been waiting for Washington Township to break out at some point this season and they chose tonight’s game with Kingsway to execute. Kingsway was coming off a heartbreaking defeat to Williamstown in three sets and they may have underestimated the 2-3 WT team based on this years resume. NJCU D3 commit Anthony Trivers slammed 12 kills and Tyler Jones had 27 assists to power Township past the Dragons 2-1. Kyle Ngo, Ian Hermanson, Dan Chernik, and Connor Teeple all had huge games for the Colonials.

Wall is now 8-2 after getting past Freehold Borough today in straight sets. Paluzzi with 8 kills and Pepe and Walsh with 7.

The Lincoln Lions got their second win of the year tonight powered by 10 kills from Symir Lee-Brown. Baraa Azabi posted 9 aces and 9 digs in their home win.

The battle of Middletown was won by South in straight sets today. 6 kills from Jordan Meskin. South is now 4-2 on the season.

Has anyone noticed that Moorestown is 9-0? They have not lost a set all year… Mostly because of the play of Logan Jagodzinski… The 6’6″ strong forward will be playing basketball at University of Rochester instead of volleyball… He must be “very” good at basketball… 🙂 https://www.youtube.com/watch?v=ME7Npy4mVko

Another big slate of games on the schedule tomorrow. it’s set up for a crash and burn night for the predictor as there are a dozen games that are too close to call but we did anyway.

For those of you who are games where you are far behind… DO NOT GIVE UP! Watch this video and you will see why…

Send us your feedback! We would love to hear from you. Good or bad. We respond to every email.

We have started up soome survey’s on our blog and predictor posts over the last week or so… if you have suggestions for surveys, let us know.

Check out our new player interview with Bergenfield senior outside Justin Pauli at https://njpowerranking.com/2021/05/12/bergenfield-senior-justin-pauli-believes-in-bears-chances/

Tons of new analysis for both players and teams. Check out the home page and look for the player rater and two sets of team stat analysis.

Worth a few minutes of your time…

If you game is not on the master schedule, please let us know!!! njpowerranking@gmail.com Hey, we are talking to YOU.

We are trying to continue to add to the livestream link list for as many school out there that carry games. Our goal is to have all that are available (free) up by the tournament. Stay tuned.

Is everyone in on Pay-it-forward? Prove it! Send us your stories…