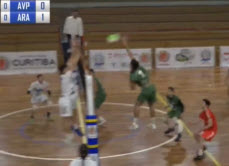 It’s not often that a player flies under the radar in NJ volleyball. From early ages and with extensive visibility of clubs throughout the state, top players rising to high school levels are pretty well known. The exception to this rule is when a player moves in from another state or possibly even another country. This is the case for the former Brazilian native Nickolas Lima who is now playing for the Newark Eastside Red Raiders.

Nick is a player. He is athletic, powerful, and has a world of experience on the International Junior landscape. Here is his highlight video which is one of the best we have seen for a high school level player…

Adding a player of Nick’s caliber to the roster while already having some strong talent has elevated the “Beastside” program to a legitimate contender in the SEC and in the North 2 sectional. They are currently 6-1 with their only loss a three set thriller with #14 Livingston. To go with Nick’s 94 kills, 6 blocks, 43 digs and 7 aces is a solid Red Raider team which include seniors Erik Narvaez (Setter, 154 assists, 7 aces, 2 blocks) and Kevin Sabadin (MB, 8 blocks, 18 kills, 6 aces). They also have a cast of juniors who all play an important role in the teams success. Dylan Quimbaya, Brian Tenesaca, Erik Andrade, and Victor DeSouza have been outstanding so far this season. It seems like a perfect storm has formed in Newark this Spring and will be interesting to see how much damage it can do on the Jersey volleyballl landscape.

What we love about Nick, other than his obvious talents on the court, is his ability to raise up his teammates. From our interactions with him, there does not appear to be the typical ego that goes with high level performers. No drama. Just focus on how he can be a leader for his teammates with less experience and how he can help raise their game to create a winning environment. Well grounded in good family values.

You bring all this together, and he should be one of the most highly recruited seniors in New Jersey. It’s going to be fun to see just how far this team and Nick can go this year. And if Eastside can be the “Beastside” they aspire to be. We wish him well.

Here is our interview with Nickolas Lima…

Tell us a bit about yourself, Nickolas?

My name is Nickolas Lima and I am from Brazil, I am a senior at East Side High School. I am in the graduating class of 2021 and I live in Newark. I have 3 siblings, two sisters and one brother, only I do sports.

I started playing when I was 8 years old in a volleyball initiation club through my parents, when I turned 11 years old I already stood out and was called to a club that participated in tournaments. (AVP – Paraná Volleyball Association). I always liked football like all Brazilians, but since I was a kid I used to accompany my parents in volleyball tournaments, so when I started practicing I soon identified myself with the sport and I never stopped.

“Nickolas is the type of player that you need to stop and watch. He is a versatile player who excels in every facet of the game. Every thing he does is so purposeful and graceful. More importantly than his skill, he’s the most humble person in the gym and leads by example. Although he’s about to eclipse 100 kills on the year, what makes him one of the top players in the state is his outstanding sportsmanship and emotional intelligence. He really is a great kid.” – Eastside Head Coach Alana Aranjo

I am 6’ 2’’ and I have a vertical reach of 10’ 11’’. I always played as outside hitter, but in a year at school in Brazil I played as a middle. At my Core club and at my school I play as outside. I like the position of Outside because you need to be very concentrated and you are always participating in the plays.

Tell us about your Eastside teammates. Who do you expect will be this year’s standout and up and coming players?

I think our team this year has great players and we have a chance to do very well. We have a great setter Erik Narvaez who manages to distribute and organize all of our team, our centrals have been doing a good job also being among the best blockers in the state.

I plan to continue playing and I was called by some colleges, I still haven’t had a sure choice which one I will go to, however I want to go into business and stay focused on the sport and try a career.

Tell us about your volleyball experience in Brasil…

When I played in Brazil, I stood out very quickly and always remained among the best players in the state. Between 2016 and 2019, I participated in the selection of the best in the state being captain and playing at the Training Center of the Brazilian Volleyball Team in Saquarema – Rio de Janeiro. During my cycle in Brazil, I had many individual and team awards, in addition to having participated in 2018 and 2019 in the International Championship in Chile.

What were the circumstances that brought you to NJ volleyball?

I came to live with my parents here in 2019 and soon I tried to join a team, after that, there was Covid-19 and I was worried that I would not play again. But at the end of last year, I joined Core’s club and soon came back in my best shape.

What are your goals for this years high school season?

I hope to achieve the goals with my team, taking the East Side to the top of the best teams in the state, since last year we did not have this opportunity.

We are a family that likes to travel a lot, with the covid-19 we had to change some things and maintain a great social distance, also keeping all the essential care to avoid catching and transmitting the virus.

Always before the games I listen to Brazilian music in the style of Hip-Hop, and watch some plays by professionals like Earvin Ngapeth, Giba and Kubiak to have a motivation and inspiration before entering the court.

I love to travel with my family, but I am passionate about electronic games, so when I am not training or studying I am playing and having fun with my friends in games.

In my offseason I keep going to the gym and I try to play volleyball in some places with friends, it helps me to keep my shape for when I return.

My whole family has always supported me since the beginning, as they already played volleyball they always gave me tips and helped me to improve, they are always watching my games and cheering a lot for me.

Certainly Giba for me, he is the best player who passed through the courts, winning several tournaments for the selection of Brazil and showing all its importance to the Brazilians. The way in which he played being low and using his intelligence a lot was extremely different and beautiful to watch.

I believe that volleyball is a sport that besides being extremely competitive, it works with various values ​​that are used within society such as cooperation, responsibility, respect and through it I learned and became a much better person. Many people believe that to become a professional you need only talent, but effortless talent and training is easily beaten by a motivated athlete who seeks improvement every day.