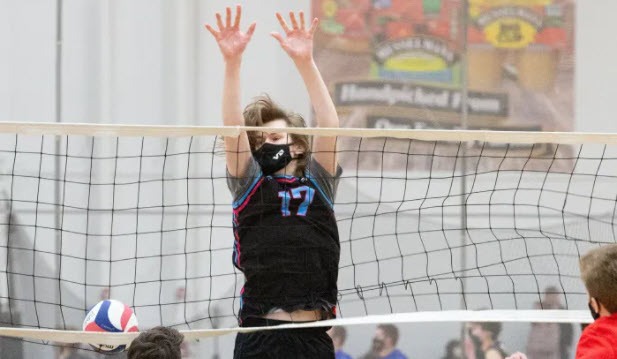 Hillsborough always brings quality teams to the boys high school landscape. Their traditional kick-off tournament the first week of the boys season was truly missed these past two years with the pandemic. It is usually a showcase of all the top teams in NJ. But this season, the Raiders have been putting on a showcase of their own with a solidified top 15 presence and quality wins against some of NJ’s best.

One of the newcomers to the Raiders squad this year is junior Jack Freese. Jack has provided a big presence in the middle on the block and on the attack. His 6’8″ frame has been a welcome addition to a Raiders team that has a wide variety of talent including Vinil Shah and Lucas Lopez at outside and Patrick Kelly at Setter.

We first saw Jack last season at Core Volleyball Club. The club experience has taken Jack from a good player to one of the best middles in the state. You will hear his name frequently over the next two years as he is just a junior and will be highly recruited NJ athlete. Jack has really taken his game to a new level, has great instincts on the block and can put the ball down, and down hard, on the attack.

The one-two punch that the Raiders bring to the table with Freese and Shah can absolutely dominate. Boro has filled their schedule with some of the best team that NJ has to offer and will benefit greatly from this come playoff time. They have beaten some very good teams in East Brunswick, Bridgewater Raritan, St. Peter’s Prep, Ridge and Fair Lawn and have gone to three twice with Hunterdon Central. Old Bridge is one of their defeats in identical 25-19 sets. They will represent a very tough out during the state playoff grid and we would not be surprised to see them make the semi-final game.

Jack carries himself with great maturity and respect. He really looks like he enjoys playing the game and thrives on the energy created from one of his kills at the net. He has had almost 100 in the first 13 games and also has posted 34.5 blocks, a pace of more than 1 per set. Jack’s wingspan, arm swing, and physicality make him a force to be reckoned with in the Skyland Conference and the Central Regional.

Here is our interview with Jack Freese…

Tell us a bit about yourself, Jack?

Hello, my name is Jack Freese and I currently attend Hillsborough High school. I will be graduating in 2022. I have 2 older sisters, both of them played club sports when they were younger. My parents had always supported me playing sports when I was younger, however I wasn’t really enthusiastic about any of them until I started playing volleyball.

I started playing volleyball in the summer of 2018, when my parents convinced to go to a summer camp at CORE. After that I gained a appreciation for the sport.

I’m 6’8, however I haven’t had the chance to measure my vertical yet. For my high school and the CORE 18 team, I played as a middle blocker. For now my favorite position is a middle blocker, however I like to think of myself as a pretty well rounded player so if a team needs me to play a different position then I wouldn’t mind trying.

Tell us about your Hillsborough teammates. Who do you expect will be this year’s standout and up and coming players?

All of my teammates on the Hillsborough team have something that separates them from the rest. I think the players that stand out the most this year are Vinil Shah (OH), Patrick Kelly (S), Lucas Lopez (OH) and Miraj Vakil (L). Patrick has the ability to make good decisions on the fly, and is able to adapt to almost any situation. I’ve been playing with Vinil for a while, and I can confidently say that he’s one of the best players in the state. Lucas is a smart player, and knows what he has to do to get a point. Miraj has been a great asset to the team, he’s been working extremely hard recently and we can all tell that he’s improving. Playing with such great players have allowed me to play at my highest level.

NJP considers you as one of the top players in the state, especially for your class year. Do you plan on playing in College? (If so, which ones are you looking at? What do you plan to study in college or what is your career path?

You are one of the leading players in the junior graduating class of 2022 in the state of NJ. What do you hope to accomplish in the remainder of your high school volleyball career?

Our goal as of now is to win our conference and move to the top of the rankings. For my personal goal, I hope to break 130 kills before the end of the season.

Hillsborough has had a great season thus far and you are right in the thick of the top 15 teams. What team do you feel will be your biggest challenge in the Central sectional playoffs?

As of now I think that we need to watch out for Old Bridge, however there are many times where we lose to ourselves more than our opponents. Once we get the ball rolling, there’s no one that can beat us.

I grew up in a pretty tall family, so for a while I didn’t feel much different from anyone else. Though as you get older, height is one of the main things people see when they first look at you, so for a while I was unable to escape from the, “do you play basketball?” question. But because I play volleyball, I have a pretty good comeback.

My biggest motivators are definitely my parents. They’ve always been there for me no matter what. Even though they’re both exceptionally busy, they always take time out of their day to come to my games or watch the livestreams. Without their help and support, I wouldn’t be anywhere near where I am now.

The coach that has most positively affected my career is Pedro Mundaray from CORE. He’s pushed me to be the best player I could possibly be. He brings a certain energy that fires the team up, along with providing helpful and precise feedback to every player.