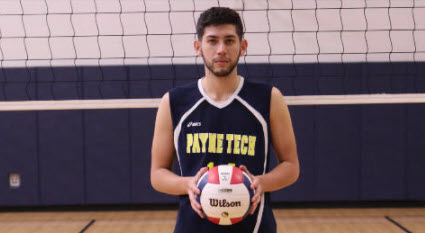 The 2018-2019 season was the first year in Payne Tech’s volleyball existence. Coach Brian Johnson’s team got a slow start at 3-5 and then reeled off 11 straight wins on their way to a very successful year one as a high school varsity program. They surprised a lot of people at that time posting 18 wins and making it to the SEC tournament semi-finals. Like many teams in NJ, the COVID cancelled season wreaked havoc with players missing their senior season and many disappointments during uncertain times.

But that is all behind the Lions now and they have started the season with 15 straight wins. They have been somewhat dismissed in the rankings as their schedule in the SEC has not had the intensity or match-ups against top 20 teams. But all that changed on May 14th when they took on league foe and state ranked #14 Livingston. Livingston is loaded with club volleyball players who approach the game as a year-round event. It was a test that most fans did not believe the Lions could pass. But it was a turning point for them as they not only beat the Lancers but accomplished a straight set victory.

The player that has been leading this team all year was Nathaniel Lopez, a senior outside hitter. Nathaniel stepped up for the big game and nailed 9 kills, had 11 digs, and pounded 2 aces against arguably the best and highest ranked team in the SEC. This has opened fans minds that the Lions are for real. They have lost just two sets out of 32 played. And have never left the floor defeated this Spring season.

Nathaniel has been impressive. As a sophomore, he was more of a defensive specialist and tallied almost 100 digs over 18-19 season. But this year he has already passed the 100/100 level in kills and digs, the sign of an outstanding outside hitter. He is not 6’5″. He stands 5’10”. He is not a big leaper. He just gets the job done. He brings grit, determination, and a scrappiness that sets the tone for all of the players on the team. His leadership abilities are his hallmark. And his quiet passion that exudes from the core of his being. He has fallen in love with the game of volleyball and that love is driving the spirit and the exuberance from his teammates.

There is no way of knowing just how far this team can go this season. Sometimes things just click and it can provide a magical journey for a team that becomes a family on the court. With players like Nathaniel, we get the sense the magic is just starting.

Tell us a bit about yourself, Nathaniel?

My name is Nathaniel Lopez, I am a senior at Payne Tech High School and am graduating this June. I live in Newark, New Jersey. I have two siblings, an older sister and a younger brother. Athletics run in our blood. My sister was a star softball player at North 13th Street Tech — where I spent my first year.

Before my freshman year of high school, I only played volleyball one time at a middle school tournament. I originally played baseball for a while until high school. Volleyball never crossed my mind; however, I decided to give it a shot when I heard about North 13th Street’s successful program. Once I got on the court, I knew this was where I belonged.

I am 5’10’. I don’t have a vertical jump to brag about, but it gets the job done. I play the outside hitter position. I considered myself a defensive specialist for the first two years of my playing career, and then coach Johnson molded me into an outside. I love how I’m involved in every play. It’s a place where I feel I can lead and impact the game.

Tell us about your Lion teammates. Who are this year’s standout and up and coming players?

Where do I even start with my team? After losing the past season to the pandemic, we had a flame lit under us from the moment we got back into the gym, with the mind set of making every gym our gym. We play with intensity and thrive on being known as a well-rounded group. There are two players that I feel standout on the team, they are two juniors that have strong mindsets. Davin Aguilar (Middle) and Luis Carvalho (Setter, DS) have a sense of confidence and play with energy, purpose, and commitment. It’s comforting to know you have a solid  blocker at the net and someone busting it on the  back line.

I’m going to continue to play beach and club volleyball. This is just the start of my volleyball journey.

You have had a great senior year so far with 92 kills, 91 digs and 22 aces through 14 games. What are your goals for the rest of the season?

My goal for the rest of the season is just to enjoy every moment of my senior year and love the game. Although it is my last year playing for this team, I’d like to end on a high note, and not only to rise as an individual, but as a team because this is and was a team effort.

“Nate exudes leadership like it is second nature to him. I don’t know where we’d be without him this season. He has a quiet intensity that I love in players. He is stable, mindful, and doesn’t get flustered. I hope in the future, my kids play volleyball the way he plays. That’s about as high of a compliment that I can give a player.” – Payne Tech Lions Head Coach Brian Johnson

Tell us about your Coach Brian Johnson.

It has been a tremendous ride playing for Coach Johnson. He takes the time and effort to coach us and reiterates that every time we touch a volleyball, we get better as players. He’s very passionate about what he does, runs an intense practice, expects you to be in shape, and demands that the game is played properly. He’s big on that last part. Despite our flaws as a team, it is always comforting to know you have a person like him in your corner. He cares a lot about the program, and I’m honored to be a part of it.

The Lions are undefeated at 14-0 and moving up the rankings quickly. How far do you think the team can go?

I think we can go really far this season. We have such a great support group — starting with the  coaches, teammates, fans, and managers. There’s always been a family atmosphere at Payne Tech and where I came from at North 13th Street Tech. The coaches make you feel like you’re a part of a volleyball community. That makes us strive forward every time we are on the court. We always say as a team, the ceiling is only as high as you make it, but you can always break through it. I think we have been breaking through every obstacle that we have faced. We don’t put a cap on it.

The coaches that I have now were there for me from the start. All three were at North 13th Street and moved over to the new building when it opened two years ago. Coach Johnson, Coach Batista, Coach O’Connor all taught me different viewpoints of the game, and if I was ever unsure of myself as a player, they were always there to reassure me.

Who is the toughest competitor you have played against this year?

I feel the toughest was Livingston. Even though it was a fairly early regular season game, it meant something more to me and my team. We did finish the match in two sets, but they’re always challenging because they’re well coached like us.

The biggest support group I have are my friends. Since we all are engaged with volleyball, I can always run to them when having an off day or feeling good about something I did in a game. We are practically another family on and off the court.