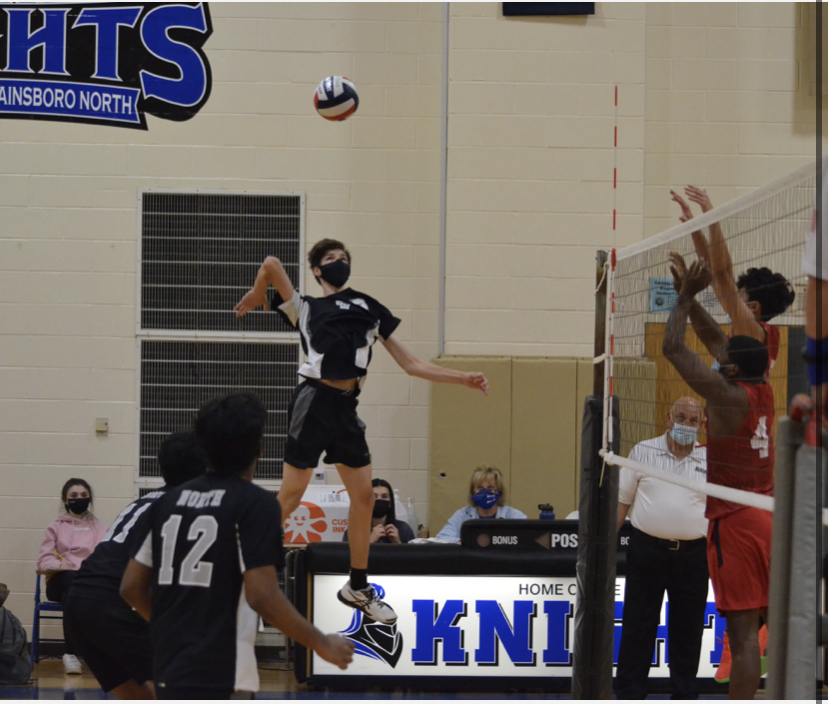 Sophomore and first year varsity player Max Finkielstein is already making his mark in his initial season with the West Windsor-Plainsboro North Knights. The NJP Player Rater already has Max in the top 4% of all players in the state, which is truly exceptional considering he is competing against junior and seniors. The Outside Hitter is ranked #66 overall in NJ and third in his Class of 2023.

The Knights have battled this year and have just about as many wins as losses. They have a very tough draw in the first round of the Central Sectional in the upcoming State Tournament and will be facing JP Stevens in Round 1. The Hawks have been playing against some of the more elite teams in NJ this Spring and it will present a very large challenge for WWPN. The Central Regional is the toughest to compete in with many of the top 20 teams coming from this area.

Max just started playing Club volleyball at Princeton Volleyball Club in 2019, but he has already excelled to be one of the states top high school volleyball prospects. His 6’1″ frame is still growing and he has the athleticism to match his future goals. He has participated for four years in Parkour activities which if you are unfamiliar with this style of training, here is a quick video tutorial link… https://www.youtube.com/watch?v=nUh6D3yeKNc&t=0s

Max may have a chance to create a magical season for the Finkielstein family in 2022 as he hopes to convince his older brother Luke, who plays Basketball for the Northern Knights, to join him on the volleyball court in his senior year. That would be amazing. Max has a bright future and will certainly be an often mentioned player on the NJP pages over the next two seasons.

Here is our interview with Max Finkielstein…

Tell us a bit about yourself, Max?

My name is Max Finkielstein, I go to WWP High school North. I live in West Windsor and I am graduating in 2023. I have an older brother who is a junior now, that plays basketball and soccer but I am trying to get him to play volleyball with me his senior year.

I have been playing volleyball for a long time. My dad introduced me to volleyball when I was in 3rd grade, but I didn’t actually start playing and learning until 5th grade and my first organized volleyball team was Princeton Volleyball Club last year, in 2019-2020. I was mainly inspired by my dad, because he would take me to AVP tournaments and Princeton games all the time.

As of now, I am 6’1”, I have a standing reach of just under 8 feet and a wingspan of just under 75 inches, or 6’3”. My approach vertical is 34.4 inches and my standing block is 26.6 inches. I have played outside on every team I have been on until this year, when I joined Warren Six Pack where I filled in for middle for a tournament for them, and I have been playing middle with them since, but I am trying to work my way back to the outside. My favorite position is outside, not just because hitting there is easy, but because I can play all the way around. I have more chances to serve, pass, and if I need to, set other players.

Tell us about your WWPN teammates. Who do you expect will be this year’s standout and up and coming players?

I was super lucky with the teammates I ended up with on my high school team, especially with Parth kale and AJ Malabunga, who were both my teammates from other years on PVC. Most of our starting lineup is seniors, but over the summer I am going to train with the team and get us ready for next year. I think two big parts of the team next year will be Rithvik Konda, who will most likely be the teams starting outside next year and Raunaq Saini who will be the new starting setter. And another sophomore, next year will be the starting middle, Shauri Jaligama also has potential to get much better during the offseason.

NJP considers you as one of the top players in the state, especially for your class year. Do you plan on playing in College? (If so, which ones are you looking at? What do you plan to study in college or what is your career path?

I do plan on playing in college, whether it be for the school team or a club. I am also looking for beach leagues to play in this summer and if all goes well I would love to think about playing in the AVP.  I don’t have that many colleges in mind as of now but I was looking at Stevens University for some sort of technology career path. I don’t know what I want to major in right now but I am taking a computer programming course in school right now which has been a big interest for a while, and something especially with how the world works right now, can open up a lot of job opportunities.

A lot of people ask me how I jump as high as I do, and most of it was from the 4 years of parkour I did. I would go to my local parkour gym for about an hour every day for a few years before they closed, Most of the days was just an hour of running, jumping, flipping and moving around the gym which helped me a lot to get in shape for the upcoming years of soccer, ultimate frisbee and volleyball I did. Being a part of a combined ultimate frisbee club for high school north and south last year was a lot of running and conditioning, which still keeps me in shape when I’m not playing volleyball.

You are one of the leading sophomores in the state of NJ. What do you hope to accomplish in your high school volleyball career?