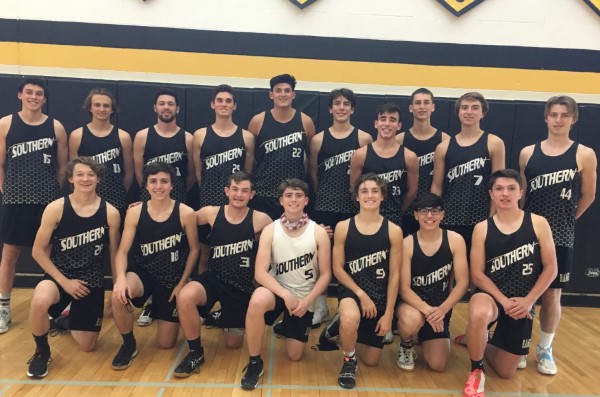 The Southern Regional Rams avenged their only loss of the season thus far and defeated previously unbeaten CBA in three sets tonight to win the Shore Conference Tournament. Southern started the season with 13 straight wins before playing CBA in a #1 vs. #2 scenario. Since losing to CBA, Southern has gone 12-0 including the win tonight and are red hot as they continue their quest for another NJ State Title.

Southern has been a dominant force on the NJ high school volleyball scene for more than a decade. The last two seasons have been tough for the Rams to swallow with Old Bridge winning two straight titles. Southern is looking to re-establish their dominance this season, and at 25-1, are well on their way to accomplishing that goal.

NJP spoke with Southern senior CJ Schmidt tonight after the victory. He told us… “At Southern, we have one goal for our season, and it’s to win a state title. We work hard and find ways to get better everyday at practice or during games and we’re starting to peak at the right time.” We asked CJ about the Rams chances going forward and favorable match-up over the next two rounds. “We don’t look past anyone and give everyone respect when we play them, but when we’re playing our game, we can beat anyone.”

Southern usually has a target on their backs after their dominant decade of top performances. “Everyone wants to take down Southern” CJ shared.

Tonight’s game was filled with usual heroics by the normal cast of characters. The Ram’s Tommy Deakyne had his best game of the season, rising to the occasion, as he usually does, for the big match. He put down 23 kills as well as 7 digs and a block, representing his all-time best for the state leader in kills. Setter Dylan Lockwood had 35 assists and added 12 digs, a kill, a block and an ace. Ethan Case was outstanding on the back line with 25 digs. And Lucas Kean added 8 kills and a block.

But the Rams also received some great performances from some new contributors who stepped up for the big game. Keith Jeranek had his career best game with 5 blocks, 4 kills and 4 digs. Finn Olcott also stepped with his best game of the year with 7 digs. Coach Maxwell has been using his entire varsity squad this season providing experience and depth as well as options for the remaining drive to the title.

Both squads will be focused on the State tourney now and the 6 wins left that will give them a state title. Southern has Pinelands and then Lacey next in the South Sectional and CBA is slated to play Kennedy Iselin and then the winner of Colonia/Howell. The Central is crazy deep so we expect CBA will have a slightly tougher road to the final 4.

Congrats to the Rams tonight and we look forward to the potential of a Round 3 game between these two teams in the Final 4.