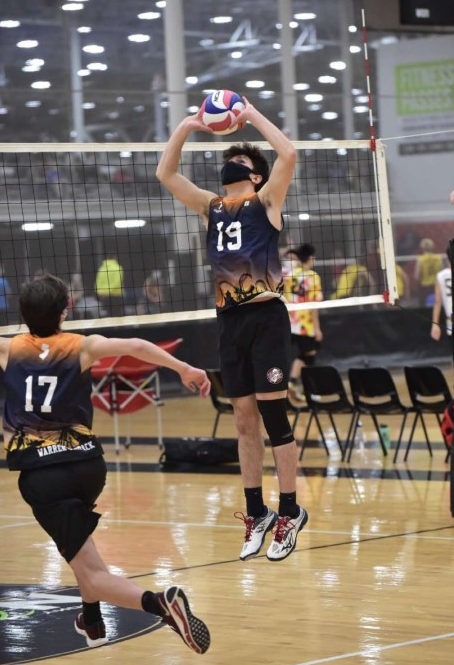 Scotch Plains Fanwood is the only undefeated boys high school volleyball team left in New Jersey. We are one week from the conclusion of the season and the Raiders are 24-0 facing a semi-final state sectional game later today. They have some outstanding senior leaders like Anthony Ngumah and Nate Sta Rosa. But they also have three varsity starters who are underclassman.

The team’s quarterback leading the offensive strategy is sophomore Nick Schmidt. Nick has made an amazing impact on the Raiders team in his first varsity year. He is a seasoned travel player on the Warren Six Pack 16-1 team. He has soft hands and can set to a spot accurately and with deception. Schmidt has orchestrated the “perfect” season thus far for the Raiders and with just a week left in the season, if SPF can win just 2 more games, they will earn a State Sectional Championship.

Nick is not a one-dimensional player. He has a top spin jump serve that makes him a constant threat on the service line. He has quickness and athleticism to get to balls all over the court from passes or while digging. He can tip and is a threat in his own right as an attacker. He spreads his offense well on the attack using his right side, middles and outside hitters at the net or from the back row. And above all, he is a solid student academically.

Nick has had a special connection with senior outside hitter Nate Sta Rosa this season. Sta Rosa is approaching 200 kills for the season and Nick knows his right-side sets are in good hands. Schmidt is approaching 500 assists in his first season and is 4th in the state in that category, and tops in his class year.

Schmidt is getting a world of experience in his first varsity year. He still has so much to look forward to in his school career. Considering his current abilities, he will most likely be a star as a junior and one of the most highly recruited players in NJ for his senior year if his growth continues. But Nick is currently focused on the game or games ahead of him in the current season to maximize the Raider’s chances to advance to the finals.

Here is our interview with SPF sophomore setter Nick Schmidt…

Tell us a bit about yourself, Nick?

Hi, my name is Nick Schmidt, and I go to Scotch Plains Fanwood High School. I am graduating in 2023. I have an older sister that graduated in 2020, and my parents both played volleyball. I also play soccer and swim for my high school.

I am 6 feet tall and my approach vertical is 30 inches. I am the captain of the Warren Sixpack 16-1’s with some of my teammates on SPF, and play setter. Originally, I started as a libero during my first 2 years of club, then transitioned to outside. This is my first year as a setter, but it is my favorite position by far. I am able to distribute the ball and control the tempo of offense.

Tell us about your Raider teammates. Who are this year’s standout players?

This year’s standout players are seniors Nate Sta Rosa and Tony Ngumah. They are our biggest threats on offense and lead the team by bringing us all together. Tim Ennis, Amir Johnson, and Aiden Hiefetz are all very big parts of our offense as well and will be important during the state playoffs. Zach Chung and Dan Sicinski are also instrumental in our defense. Another key part of our team is our strong bench.

NJP considers you as one of the top players in the state, especially for your grad year. Do you plan on playing in College? If so, which ones are you looking at? What do you plan to study in college or what is your career path?

My goal is to play in college at a school with a strong academic program. I plan on studying something to do with STEM, but I am not sure which path I will follow yet.

Your initial varsity campaign has been so impressive. You have orchestrated the offensive charge for one of the top attack teams in NJ. What are your goals for the remainder of your high school career?

My biggest goal this year is to win a state championship title with my team. There are many great teams that we will need to take down, but at our best we can beat anyone. I am also excited about the next few years because we have a relatively young team this year.

Can SPF go all the way?

I think that our team this year definitely has the potential and skill to make it very far in the state tournament, but we will have to play our best volleyball to make it there.

One highlight of this season was winning the Union County Championship, against Union, a very strong team. Our whole team has worked very hard throughout the season, and it was a great accomplishment. Another great part of the season is becoming friends with all my teammates, and getting to know my coach, since we did not have our season last year.

My parents have taught me to always push myself and do my best. I have always taken that to the volleyball court, in training and in games.

Niko Lambert, my coach at Warren Six Pack (also coach at Saint Francis College), has had a massive impact on my volleyball career. He helped me transition to setter and has helped me grow as a player and a leader. He has taught me the importance of the community within a team. Brock Hor, my high school coach, has also been a big influence on my volleyball career. We have had a great high school season with him as our coach, and I enjoy learning and playing under him. I also worked with Aspen Luedtke who got me started with a good foundation in setting skills.

During the offseason, I play soccer and swim for the high school. I also run and lift weights for more conditioning.

Joe Worsley is my favorite volleyball player of all time. He played in college at the University of Hawaii, and later went to play pro. He is also a setter and is my height. His success is inspirational because he proves that you do not need to be super tall to play volleyball at a high level.