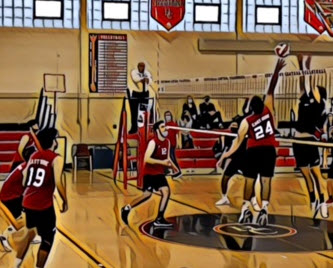 There were 16 teams remaining in the hunt for a New Jersey Boys High School Volleyball State Championship at 4PM today and by 7PM there were only eight teams left. The field of 150 teams is down to the Great 8! And it may not be the 8 teams you anticipated at the beginning of the year.

Some of the expected teams won their games for sure. Especially in the Central Sectional as the long awaited finals match-up between #1 CBA and returning Champs #4 Old Bridge is ON! Both squads won their matches today in straight sets. CBA over East Brunswick and Old Bridge over Bridgewater Raritan. CBA will host on Wednesday at 4:30PM. This will be a GREAT match to watch and a classic rivalry game as these two teams have been testing each other since pre-season.

Jack Dooling was on fire on the attack with 16 kills for CBA today. Andrew Sasso jumped in with 7 kills. Colin Steven, the Tom Brady of NJ volleyball, was his usual calm self in orchestrating another masterpiece. And the Mag 7 held themselves to their usual standard of excellence. For Old Bridge, Brian Snook and Nick Schon were a dynamic pair on offense and Rob Obdyke handled the back row with 8 digs.

The South went as planned as well. Southern dominated once beaten Moorestown in straight sets. In their typical dominant fashion, the Rams continue to look destined to advance to Monday’s championship. And Jackson Memorial will have the opportunity to get the 4th match with Southern after losing the first three, the only losses in their 18-3 season. Such an intriguing match-up as we ask the question… will the 4th time be the charm for the Jaguars?

Tommy Deakyne is one of the most standout players in NJ high school volleyball. But the Rams are as deep as they have ever been and compliment Deakyne’s talents with numerous weapons in the Southern arsenal. Jackson relies on Ben Fryc and Konrad Bieniek for the most part, two super solid shore standouts. The NJP Predictor will no doubt favor Southern, but Jackson will make this a very tough assignment.

North 1 proceeded as planned as well with Fair Lawn taking down Bergenfield in 3 sets and West Milford defeated Jefferson in three sets as well. All four of these North 1 teams are very evenly matched and it could have been anyone’s ballgame, but the top seeds and top rated teams advanced.

Fair Lawn has been a high school volleyball machine for many years and Head Coach Peter Zisa always has his teams fine tuned come playoff time. West Milford split with the Cutters this year and we expect a three set epic battle for the North 1 finals at Fair Lawn on Wednesday.

In North 2, #1 seed Kearny advanced with a win over the high flying Newark East Side Red Raiders. Santi Lopez continues to be a difference maker for the Kardinals as they are now 18-2 on the season. Those two losses were to North 1 seed Fair Lawn and the St. Peter’s Prep Marauders. St. Peter’s pulled the big upset of the day removing Scotch Plains Fanwood from the unbeaten ranks at 24-0 and dealing them their first loss in straight sets. SPP’s block was working overtime this afternoon as they shut down the offensive machine of the Raiders.

The final match-up will pit club teammates Santi Lopez from Kearny and Aidan Apito and Ryan Karbowniczak from Prep against each other for one final team this year. Santi has been a wrecking crew for Kearny all season long. Apito continued his passing assault with 12 more digs and 7 kills while “Karbow” has been a force at middle. Kearny defeated SPP in their first match this season and the Marauders returned the favor in the Hudson County Championship. Hudson County is well represented with 2 teams in the final 8 and one that will advance to the Final 4 and win a Sectional title.

Here is your Great 8!