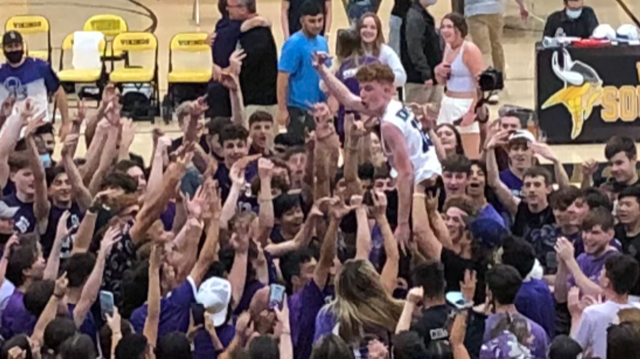 It was an electric atmosphere in South Brunswick tonight as New Jersey’s top two teams came face to face to decide who is the best boys high school volleyball team in the state. It was fitting that one of the state’s most dominant program over the past decade, the Southern Rams, would take on the relatively new power in NJ, the team that has won the state championship the last two seasons, the Old Bridge Knights. The passion toward achieving the third straight State Championship was vastly evident tonight, as well as in the Knights last few weeks run through the playoffs. It’s an achievement that has never been done before, that is until tonight.

Old Bridge was propelled by both outside Brian Snook and middle Aaron LaPlaca on the offensive charge. Both individuals were absolute standouts tonight for the Knights. Snook was unstoppable during certain stretches tonight, especially in the first set. LaPlaca had to have a .800 hitting percentage or better tonight and was clutch all night long including the winning point in the third set. We have not seen the official stats but expect both players had 12+ kills.

Aaron was dominant on the block, along with Zach Cuisinier and Nick Shon, and Southern did not have a definitive answer for the Old Bridge stockade. They were turned back on numerous occasions with well timed push-backs. Southern appeared to be telegraphing their sets a bit more than OB, giving the Knights time to set-up on the block. Schon, on the other hand, was a bit more innovative on his offensive strategy causing a delay in the Rams response time up front. He had 36 assists for the night. The Rams could not find an answer for Snook, and LaPlaca was near perfect.

Old Bridge benefited all night from the back row play of Rob Obdyke who had 17 digs. Rob made some remarkable digs on shots that clearly should have been kills. David Flores was also outstanding on defense. These two players have been keeping balls in play all season for the Knights and tonight we saw some truly spectacular saves.

Blake Krapf and Pavlo Chernyshov added to the offensive punch for the Knights. Both contributed to the block as well on night that clearly seemed tilted toward Old Bridge. Southern fought all match and would just not go away taking a second set in extra time after it seemed certain that OB would prevail in straight sets.

Lucas Kean was an absolute standout for the Rams. Southern put the offense in Lucas and Tommy Deakyne’s hands with frequent sets and resulting powerful hits. Both these players battled to the very end and put up some monster numbers. Deakyne had 21 kills and Kean added 15. It was so impressive watching Kean, just a sophomore, react under pressure and deliver. Deakyne was his usual outstanding self and handled a large load for the Rams.

NJP selected Southern to win on three sets, with OB taking the first and the Rams taking the second in extra time. We had Southern winning in extended session in the third and felt pretty good with the selection with the score tied at 19 in the third set. But Old Bridge took over with a major momentum shift and never looked back taking the last three points and the match.

Congrats to the Knights who will look for 4 in a row next season. They have a deep group returning as does Southern. So we may see these two teams again next season in the same place at the same time of year. It should be spectacular.