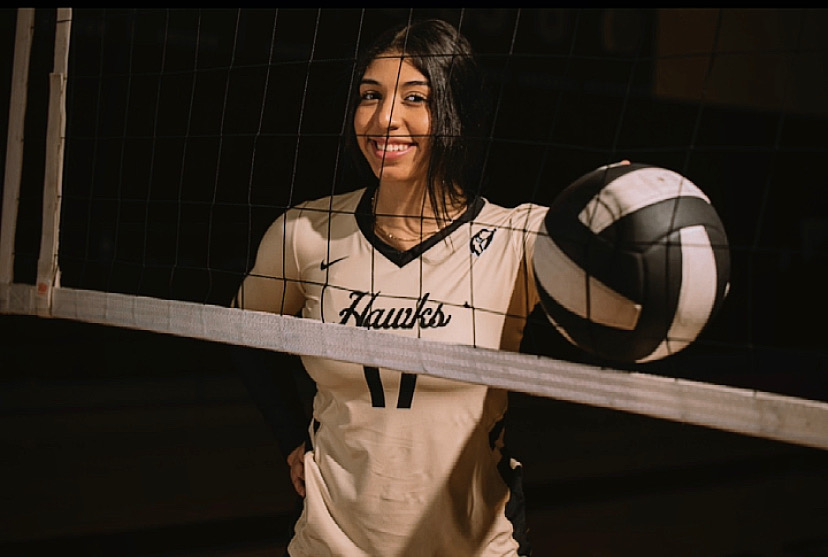 The Hudson Catholic Hawks continued their domination of Hudson County in the Spring and positioned themselves to possibly become the #1 team in the state by earning a showdown with the Immaculate Heart Blue Eagles in non-public North A sectional finals. They battled all year long, dominating the vast majority of their opponents with just one blip, a mid-season loss to Top 10 Williamstown after a two hour plus bus ride to South Jersey. They entered the title game at 12-1. A win over the perennial elite IHA team with 15 straight sectional titles would have put them in the conversation for top in the state.

The Hawks pushed IHA to a third set but fell just short in their bid to uncrown the Blue Eagles. But getting to that game and that final set was just an amazing accomplishment for the Hudson County team who boasted some of NJ’s top players. One of those players was junior Kiannisha Santiago.

Santiago blasted out of the gate in her first varsity campaign at HC as a junior with stellar numbers statistically recording 5 double digit kill totals in just 14 games. She led the team in kills with 109 and was the perfect complement to Paulino-Rubel providing attack lanes on both sides of the court. This resulted in bombs being launched from the left, right and middle with Valle taking the center charge. It was this kind of firepower that had the chance of unseating the VB Queens of NJ volleyball. Falling a set short in their journey left the Hawks with a final ranking of #7.

Athletically, Santiago is a physical specimen. She has power and height and the ability to produce high velocity slams. She has great footwork around the net and is a strong blocker. We expect a transition to outside normally, but their new leader may have something else in mind.

Kiannisha is primed to dominate this Fall for a team that will have new leadership after Coach Fernando Colon stepped down to coach at the collegiate level at D2 Bloomfield College. Former Hawk standout Katria Stewart 15′ will be taking the reins of the program this season. Katria, played right side at University of North Carolina-Charlotte and still holds the record for most Hawks kills in a season with 444. Kiannisha will have a new mentor and possibly some new tricks this fall.

Here is our interview with Ms. Santiago…

How are you, Kiannisha? Thanks for joining the NJP player interview club. Tell us a bit about yourself?

I am great! Thank you. I am currently attending Hudson Catholic High School. I am a part of the graduating Class of 2022 and I live in Hoboken, NJ. I have a big family and we are very close. They are my motivation, and they always push me to be my best.

I am 6’0 tall. I play OH/RS. My favorite position to play is OH. I love playing OH because I enjoy playing 6 rotations. I am currently playing for SureShots Volleyball Club.

Tell us about your Hawk teammates. Who do you expect to be this year’s standout players in the Fall?

All of my teammates are amazing. They are very talented and love to compete. This upcoming season I think a standout player will be Drew Leonardis. She is a well-rounded junior who plays at a high level.

My dream is to play volleyball at the collegiate level.  I would love to get my degree in Criminal Justice.

The Spring season was a great one for the Hawks, advancing to the Sectional Non-Public finals against Immaculate Heart. Tell us about your season and the experience in the state playoffs.

Last season was really fun. We were very excited to compete in the state playoffs. Though we did not have the outcome we wanted, the experience was great and we learned a lot. I think this year’s team is going to have a good season as well. We cannot wait to play together and compete against other teams.

You led the team in kills last season as a junior. What are your goals for your senior season? Do you expect to play opposite or move to middle or outside?

My goals for this season are to have a better defensive season and be more consistent. I also want to get more kills this season than I did last year. I am looking to play wherever I am needed for my team to be successful.

One of my favorite players that I look up to is Stephanie Enright. She is an OH who currently is playing in Italy. She is the backbone of her team. She always gives her best effort and she is just an amazing volleyball player.

Yes, I plan on continuing to play for SureShots Volleyball Club

What do you do to calm your butterflies while you compete?

I take a deep breath and remind myself to play point by point. If I make a mistake, I tell myself to move on to the next point.

I love to go to the beach with my family and friends and I also love to relax and watch Netflix.

A good captain is someone who is humble and leads by example. They are also very vocal with their teammates.

What one word describes you best?

One word that describes me best is humble.

Athletics made me a better student because it taught me how to be discipline and responsible. Staying discipline has helped me get good grades in my classes.

My mom is my motivation in everything I do. I want to make her proud!

Who made you love sports?

My dad made me love volleyball. He encouraged me from a young age to become an athlete. He always wanted me to have a great future and knew that sports would be a way for me to get a good education and be a well rounded person.