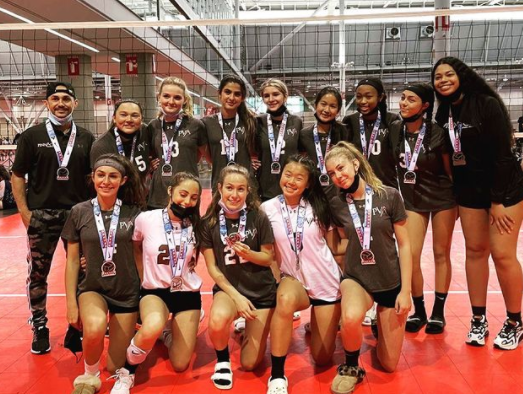 It is always refreshing to see a freshman hit the high school scene and make a major contribution to their school’s success. There were a handful of freshman student athlete’s for volleyball that will standouts for their high school teams. Mia Gonzales of Bergenfield was part of this young group, and some could argue, she led the way.

Mia had more kills than any freshman in New Jersey during the high school season. She was also in the top 15 for both digs and aces in her class. She led the Bears in kills as well. Mia has been building her skills at the club level at Pinnacle. Starting at a very young age, Mia already has 5 years of volleyball play under her belt. She played on the 14-1 National team this winter.

NJP, like many in the NJ volleyball community, was a big fan of her brother Nick who just completed his high school career for Bergenfield. Nick had the most blocks in New Jersey as a senior so it appears volleyball expertise and pedigree runs in the family.

Mia is already a skilled and talented outside hitter. She has excellent ball control and a solid swing that will continue to garner points for the Bears in the future. She has outstanding intincts on the floor and a strong VBIQ. She will surely be a leader on the Bears attack for the next three seasons.

Being in the Big North is no picnic and the level of competition is always a challenge. Bergenfield got off to a great start this spring winning 4 of their first 5 games and then settled into some really tough losses to Demarest, Tenafly, Pascack Valley, Fort Lee, and Old Tappan, all perennial powers in the North. They also lost a very tough state playoff game to Hackettstown who went on to be the sectional co-champion.

The Bears graduate 5 varsity players but return 7 teammates to help build on what they started in Spring 2021. Mia and Co. will look to bring the Bears a winning season, something they have not accomplished in the past decade.

Here is our interview with Ms. Gonzales…

How are you Mia? Thanks for joining the NJP player interview club. Can you tell us a bit about yourself?

Hi, I live in Bergenfield and I am currently going to Bergenfield High school. I am going into my sophomore year and graduating in 2024. My brother also played volleyball, he was the middle blocker for the boys team and he just graduated.

I have been playing volleyball since I was in 4th or 5th grade. I started to play volleyball because it was a new sport and I wanted to try it, with my dad coaching me.

I’m 5’6 and an outside hitter. Im and outside for both my club team (Pinnacle) and high school team. I used to be a Middle hitter/blocker, but during the pandemic, while playing with my brothers varsity team, I started outside and have preferred to be an outside ever since.

Tell us about your Bears teammates. Who do you expect to be this year’s standout players in the Fall?

My Bear teammates stand out in their own way. My team and I are family and the way we play together is amazing and volleyball uses more than one person to win. So in their own way they all standout, especially having Linda Chu as my coach.

NJP considers you as one of the top players in the state, especially in your class year. Do you plan on playing in college? (If so, which ones are you looking at? What do you plan to study in college or what is your career path?)

I would love to play in college. The colleges I have been thinking about were my favorite team Nebraska or Hawaii. They both have great programs for volleyball. If I could, I would love to study criminology,or anything in psychology.

You broke onto the high school scene with a standout freshman year posting 97 kills and tallying 24 aces in the short season. What do you expect to accomplish during your high school career?

Tell us about your club experience at Pinnacle.

My club experience at Pinnacle has been the best. I absolutely love my team and my coach. The girls love the game just as much as I do and want to become better. They are so much fun to play with on the court and amazing girls to hang out with off.

There is an athlete that I look up to. She plays on the team Nebraska, her name is Lexi Sun, she is also a pin hitter just like me.

I do watch something before playing it usually video compilations of girls’ college teams playing and most of the time I would watch the pin hitters of how they hit, and how far they transition off the net.

I am the youngest person in my family. I also used to play basketball but I stopped playing to focus more on volleyball after my 8th grade year.

I love to take photos on my camera that my dad gave me. I would take pictures of trees outside my window or my friends whenever we go out.≈