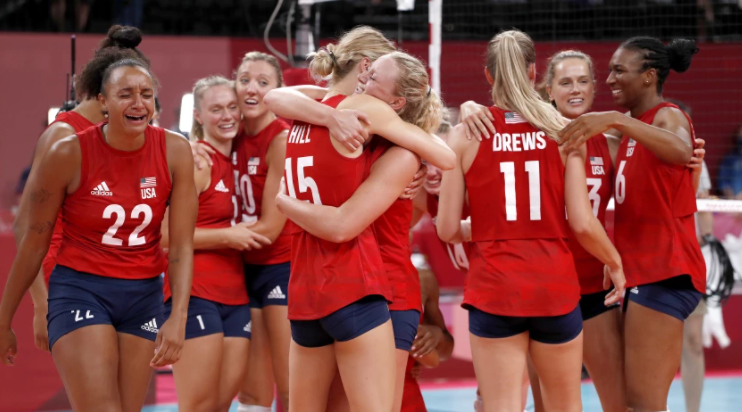 The Olympics have come to an end in Volleyball for both men and women, beach and indoor. For our USA teams, the women took home GOLD in both categories. The men did not.

The USA women’s team were absolutely dominant on the hard court last night beating Brazil in straight sets. This was with one of their best players, Jordan Thompson, sidelined due to injury over this past week. But everyone picked her up, especially Annie Drews. Hats off to the entire team but special recognition to Jordan Larson, Jordyn Poulter, Justin Wong-Orantes, Foluke Akinradewo Gunderson, Haleigh Washington, and our pick for MVP Michelle Bartsch-Hackley. Here is the offical scoresheet from the Gold Medal game. http://www.fivb.org/vis2009/getdocument.asmx?no=256321067.

What an incredible run and story for the women’s beach combo of Alix and April. Alix Klineman and April Ross won Gold, the first for both players, but April adds to her now full suite of winning Silver, Bronze, and now Gold. Great article here to recap at https://www.nytimes.com/2021/08/05/sports/olympics/olympics-beach-volleyball-alix-klineman-april-ross.html

Some really great performances by the men on both sides but there will be no medals in Tokyo for both indoor and beach.

As far as our NJP contests, Congratulations to all the participants who took down the NJP Predictor in the “Medal Round” contests. Let’s recap…

Georgian Court Head Coach Dan Sempkowski showed off his expertise and knowledge of volleyball throughout the contests. For the Women’s Indoor, he received a perfect score!!! He had all three medal winners in order. That is just outstanding!!! Congrats Coach Dan!

Coach Dan once again showed off his knowledge on the Men’s beach side, beating NJP (and everyone else) by picking Norway to win GOLD. This guy is good!

Coach Dan, Aidan Apito, and Josh Wilets all edged NJP in this one. All three picked Alex/April to win Gold!

Coach Dan Sempkowski tallied the most overall points in the contest with 85. NJP and Aidan Apito finished tied for second with 50. Coach Dan took 3 wins from NJP and Aidan Apito had 2. Josh Wilets also took two wins from the NJP Predictor. Many thanks to all of our NJ Volleyball Community STARS for participating in the fun.