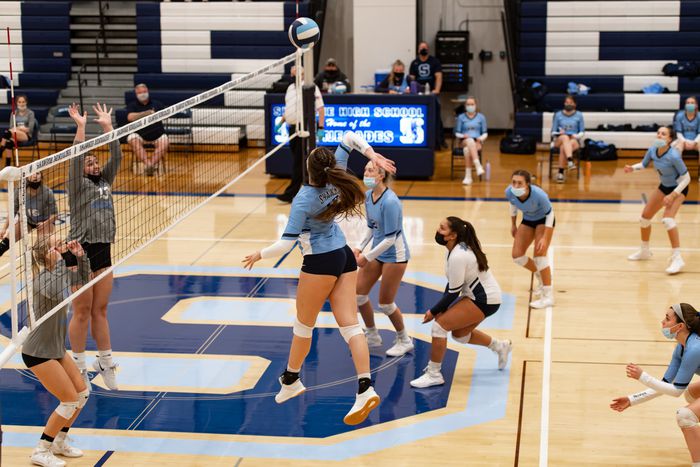 The Shawnee Renegades are coming off a South Division 3 Sectional championship season where they ended the Spring 12-1 and finished first in the Olympic Conference. The Olympic was stacked with top flight teams such as Shawnee (who lost to Southern on the Group 4 Sectional Final), Paul VI who beat St. John Vianney for the South Non-Public A Sectional title, and Cherry Hill East who finished 10-4 and made it to the South Group 4 semi-final. The Renegades lost just three sets all season, 2 in their loss to Paul VI, and one in their thrilling win over rival Cherokee.

Shawnee’s attack last season was driven by Mia Moscicki. Mia was the Olympic Conference Player of the Year and finished in the top 10 in kills in NJ. She was third highest in South Jersey and led all juniors in her class in that category. Mia accomplished all this as the only junior on a squad full of seniors. So the dynamic for the upcoming season will be completely different for the rising senior.

In our preseason rating formula, Shawnee has fallen back due to 9 of 10 players graduating, but they remain a team to watch as they always have top flight players rising up through the ranks as well as the presence of one of the best players in the state running the attack.

Mia has all the tools to dominate at the high school level this Fall. At 6’+, she will be an intimidating force at the net on offense and on the block. She gets excellent power with her smooth, compact swing and has made great strides in the 6 rotation set. Her serve receive and defensive skills continue to improve, and she brings her same powerful swing to her serve, tallying 26 aces in the Spring season.

The Cherry Hill Jersey Junior program continues to influence Mia’s rise to the top of the NJ girl’s volleyball landscape. We expect her to have another outstanding season, be a player of the year candidate, and be one of the highest recruited student athletes in NJ for girl’s volleyball.

Here is our interview with Ms. Moscicki…

Hello Mia? Thanks for joining the NJP player interview club. Tell us a bit about yourself?

Hi I am Mia Moscicki, I go to Shawnee High School in Medford, New Jersey and I am a 2022 graduate. I was born in Geneva, Switzerland. I now live in Medford Lakes with my mom, dad, older brother, and two dogs!

I have been playing volleyball for about 6 years. I started when my family moved back to New Jersey, from California. My neighbor was a volleyball coach and she told me I should try out for her club, which happened to be CHVBC.

Tell us about your Renegade teammates. Who do you expect to be this year’s standout players in the Fall?

This past season we graduated 9 of our seniors, which made up the whole varsity line-up, beside myself. This year will be a challenge, but the new group of girls are all competitive and ready to work as a team. I am excited to see how our new lineup works together on the court!

I would love to take my volleyball career to the next level in college. I would like to study nursing in college, so I am looking for a good size school that integrates competitive volleyball while still prioritizing my academics.

You had a standout junior campaign this Spring being voted Player of the Year in the Olympic Conference. Can you top last year’s performance this Fall?

I owe a lot of my success last year to my teammates, whom I’d played with for 3 years. This year, with a whole new roster, it will be a bit of a challenge to surpass last year’s achievements.

Tell us about your club experience at Cherry Hill VBC/Jersey Juniors?

I have been playing at CHVBC since I was 14 and credit them with much of my progression as a volleyball player. They not only helped me find my position on the court, but helped teach me the crucial fundamentals of the game. Over this last summer, my club team was able to win a bid for USA Volleyball Junior Nationals, in Las Vegas. We went out there and played against some of the best talent in the country. In addition, over Memorial day weekend, my club team (U17s) played up a year in the U18’s Open division in the Atlantic City Tournament, and we went undefeated.

Shawnee finished 12-1 on the season this spring with two very notable regular season games, the first was your only loss to Paul VI, and the second being your monstrous win over Cherokee. Can you tell us what stands out most from those two games?

The PVI game was probably the most important game for us all year. As this loss brought the team closer together, and inspired us to work harder as a team. We used this loss as inspiration in our following matches, including the game against Cherokee. The game against Cherokee was the only three set game of the season, which we proved to ourselves our endurance and that we were reaching our potential. It also proved how resilient we were, after losing to PVI.

Tell us about your sectional championship run and win over Toms River South?

This was the most amazing way to finish out the season. We were able to play at home for all of our championship games, which was a huge advantage. Ultimately, our team was brimming with confidence, which allowed us to win all of our games in two sets, even though we competed against very strong opponents.

In order to be a competitive athlete, it is necessary to train both mentally and physically, outside of a school environment. Athletics have enabled me to use discipline and time management for training, academics, and even in my free time. Whether it be how far in advance I should prepare for a test or setting goals for myself in school, volleyball has helped me navigate school in a more focused manner.