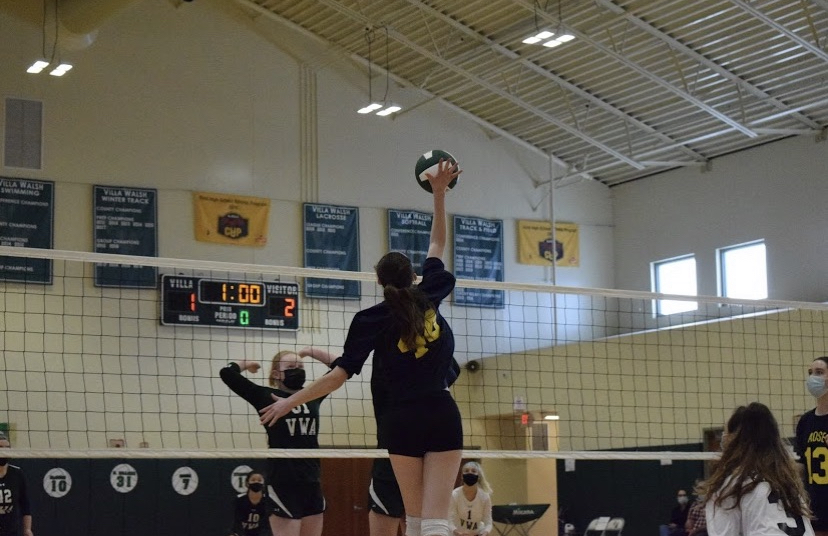 The Academy of St. Elizabeth will be a team to watch in the next few years. AOSE had one of the youngest teams this Spring fielding 75% underclassman on their roster and just one senior at varsity. They also have some young stars that you will see rise up over these next few campaigns. One of those star athletes is Clare Farrell.

Clare started playing volleyball in grade 8 and in just one year, by the time she was a freshman, she was making a huge impact on her school team at AOSE. Clare led the attack for the young Panthers in her first year, smashing a team leading 81 kills in the short season. She also lifted 39 digs and ripped 19 aces.

The 5’10” outside has unlimited potential. She was a three-sport athlete as a freshman but has now decided that club volleyball is her future. She is headed to Xtreme which will accelerate her impact for her school career and beyond.

Life in the NJAC is no picnic. The Conference is one of the most powerful in the state. But the first step for AOSE is to make in impact in the Independence division which we think they can do this season. Our NJP preseason analysis has the Panthers in the top 200 and we think they can overachieve. But their first step in their rise will be to knock off Mountain Lakes in the Independence. For a team returning 92% of their statistical impact from last year, we think it’s a challenge they can overcome. And Clare will be a big part of achieving that goal.

Here is our interview with Ms. Farrell…

Hi Clare? Thanks for joining the NJP player interview club. Tell us a bit about yourself?

Hi! I’m Clare Farrell and I attend the Academy of St. Elizabeth. I live in Livingston, New Jersey and I am a rising sophomore graduating in 2024. I live with my mother, father, and three older brothers who are all a big part of my life. I love to stay active so when I am not playing volleyball I’m doing another sport, like soccer.

I’ve been playing volleyball with my family for fun over the last few years. I only started playing on a team since eighth grade. I always played soccer, so volleyball was not an option for me. My three older brothers played volleyball, so I decided to give it a try. Once I started playing, I realized how much I love it. The early lockdown of the pandemic actually helped me improve. My brothers were home from college, so every day we would play in our yard. I feel like I learned a lot from playing with them.

I am 5’10 and an outside hitter which is my favorite position. My favorite part about the position is getting a kill. I recently joined the Xtreme volleyball club and I’m very excited to start playing there, learning, and improving my game.

Tell us about your AOSE teammates. Who do you expect to be this year’s standout players in the Fall?

My high school team is very close, and we have a very friendly and fun environment. Without each other’s support and cheerful energy, we would not have been able to push through some rough games. Everyone on the team improved throughout the year and this year we are hoping to improve even more by putting in the work.  We are expecting great results.

NJP considers you as one of the top players in the state, especially for your class year. Do you plan on playing in college? (If so, which ones are you looking at? What do you plan to study in college or what is your career path?

At the current moment, I’m just focusing on academics and volleyball, but I am hoping to play in college. With the encouragement of my high school coach Andy Jacobs, I joined a club team to learn as much as I can and take my game to the next level.

What a great freshman campaign you had, leading the Panthers in kills and finishing third in NJ for your freshman class in that category. Tell us some of the highlights of the season.

Throughout the season there were many highlights and great plays. As a freshman playing on a varsity team was such an awesome experience. One game, in particular, against Pequannock, our setter, Amanda Chambers, and I really clicked. I had 20 kills and that was all with Amanda’s help. I hope to have more games like that one this season.

AOSE returns virtually their entire varsity squad from last season and certainly has some rising stars. Do you think the team can compete for top honors in the Independence Division?

In my opinion, I believe that our team can compete for top honors. We are a young team and still have to improve in many different areas.  Last year, many of us were just learning to play together as a team.  With most of our team returning, I expect our team to build on last years’ experience and I have high hopes for a successful season.

Have you ever thought about playing club volleyball rather than playing other high school sports?

Yes, I’ve actually thought about this a lot and this year I decided to give up high school soccer to pursue club volleyball. I have played soccer my whole life and loved the sport but once I started to play volleyball, I understood that I would have to make a choice. So, I decided to take a different path. In fact, last year I played volleyball, soccer, basketball, and track for my high school but wanted to fully commit to volleyball which is now my main sport. It was a very hard decision, but I am confident I made the right choice.

The Panthers had a rough season this past Spring, especially with the shutdown for 2 weeks for protocol. How did your team meet the many challenges?

This year was definitely out of the ordinary because of Covid but our team found ways around it. For example, during the two weeks where we had to shut down, we had zoom workouts which kept us in shape. Unfortunately, It is difficult to make up missed court time. During the season we followed the guidelines, and all tried our best to stay safe and healthy. It was weird at first, but I got the hang of it and hopefully this year we won’t have to worry about shutdowns.

I look up to all my brothers as athletes. My family loves to stay active and all my brothers played many different sports throughout high school. Since they are older, I was brought along to lots of games. Every sport they played they excelled, I look up to them as role models because they showed me how to become a good athlete.

My Dad and brothers have really helped me to understand the game. I watched many high school games and they have all helped me by just playing pick-up in our backyard. My high school coach, Andy Jacobs has been really encouraging and a great resource. Coach Andy understands I have a lot to learn, but he is patient with our whole team. He has always been respectful of the other sports I played at St. E’s, but at the same time has encouraged me to pursue volleyball.

Being an athlete makes me a better person in many ways. It teaches me how to be disciplined, to always strive for more, and to never quit. I’ve been an athlete my whole life and it has guided me in many ways.