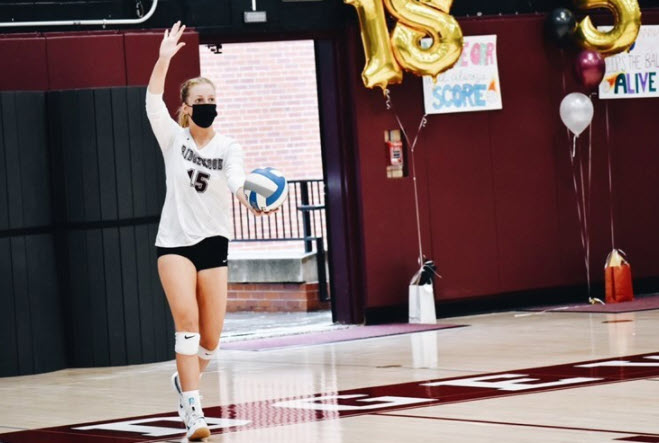 Junior Ava Pascual led Section 1, Group 4, title winning Ridgewood in kills last season and she will be in a perfect position to have a senior campaign to remember. The Maroons finished 14-3 this past Spring and lose just three seniors to graduation, setting up, what could be, a record-breaking season for Ridgewood. NJP has them ranked #8 in their preseason rankings out of well over 300 high school teams.

The 5’10” Pascual had amazing success this Spring, both at high school and club levels. The versatile outside for her high school team can always swing to middle or opposite pin if needed, making her a dangerous weapon in the Maroon arsenal. Ava has a big swing but also has fined tuned the finesse side of her game with a strong VBIQ and instincts around the net.

Ava will be a key piece of the Maroon offensive attack and as always in the Big North (which has 5 teams in the NJP top 10 preseason ranks), the competition will be high.

Here is our interview with Ms. Pascual…

Hi Ava? Thanks for joining the NJP player interview club. Tell us a bit about yourself?

My name is Ava Pascual, and I am a senior at Ridgewood high school. I am very excited (and a little nervous) to be graduating this year.  All things considered; I am hoping that it is as normal a school year as possible.  In addition to playing volleyball, I love to work out at the gym, travel, and snowboard with my dad.

I started playing club volleyball in the 8th grade and fell in love with the sport immediately. When I first started playing volleyball, I knew that a ball and net were involved, and the goal was to get the ball over the net.  Other than that, I didn’t understand much about the sport. I was always tall for my age, and that definitely played a big role in my interest to play volleyball.  Watching other tall girls and women play volleyball inspired me to embrace my height and use it to my advantage.

I am 5’10”, and on an approach jump, I reach 9’. I started off playing middle on my 14 club, followed by outside and right side on my 15 club. Once I reached 16 club, I generally played outside. I had the opportunity to start outside for Ridgewood High School Varsity, which has become the position I enjoy the most. I believe that it helped me to improve as a player to move around and play different positions. It allowed me to understand what spots are the hardest to pick up balls from, and therefore where to attack most effectively from an offensive standpoint.

Tell us about your Maroon teammates. Who do you expect to be this year’s standout players in the Fall?

I am impressed by my Maroon teammates as a whole, we are a senior heavy team and have been playing together for the last several years. I have high hopes for the upcoming season as a team, as everyone has worked hard to improve each off season. However, one player that always stands out on our team is Annabelle He.  She has an exceptional understanding of the sport and mastery of her position, often picking up balls defensively that I cannot understand how she gets to.  She finds ways to be aggressive in the back row, and her discipline as a libero is another aspect of her game that I look up to. I admire her hustle and expect her to once again step up as a main player for the Maroons.

I intend to continue to play in college, but at what level remains a question. I have had a number of college coaches contact me during this last club season, but my decision will be guided by where I want to attend college, as well as the academic programs and campus life offered.  If the opportunity to play for a school works out, that will be great. If not, I hope to continue to play club at the college I attend.  I plan on studying political science and international affairs, and perhaps attending law school after graduating.

Tell us about your club experience at SOS this Spring?

I had always been taking lessons at SOS throughout the years but had not tried out for the team. As I took more lessons and attended their camps, I felt their coaches were top notch, and that their style of coaching suited me. Last season I decided to try out for SOS in hopes of reaching a new level of competition, and my expectations for the season were exceeded. Competing in Florida for AAU Nationals and receiving 18th out of 81 other teams is an achievement in my volleyball career that I am very proud of.  Playing on a team with such dedicated coaches and teammates was incredibly inspiring, and it pushed me to become the best player I could be.  My coaches Artem Makarenko and Sue Riley never stopped pushing us as athletes- mentally and physically. Though exhausting at times, the improvement that came as a result of the pressure placed on my seven other teammates and I, made it all worth it. To their credit, I continued to grow as a player in my position throughout the season. By the end of the season, I felt that I had become a completely different player; not only more confident, but smarter on the court. From August 2020 to July 2021, the whole club put 100% of their effort into the team, and I cannot say I would be the player I am today without this past season at SOS.

What an amazing junior campaign you had, leading Ridgewood in kills on the road to a section 1, Group 4 title. Tell us some of the highlights of the season.

First and foremost, we were all grateful to even have a season, which made playing with my teammates all the more special. Our team did an amazing job of staying healthy, especially with respect to our Coach Jaime Marzocchi, who was pregnant throughout the entire season. But the highlight of the season for me was reaching 100 kills. During the season, I remember checking my stats as I was approaching 100 kills, and finally reaching it left me feeling proud of myself as well as my teammates who helped me to get there. While I was disappointed that I could not play in the section tournament as I was competing in Texas, I was so proud of my team for winning it all and happy that I could contribute to our season in getting there.

Ridgewood returns almost their entire varsity squad for the Fall season. NJP has the Maroons in the top 10 in their pre-season rankings. What are your expectations for the fall squad?

With a normal pre-season, and team of mostly seniors, I expect big things from the Maroons this year. My freshman year I made junior varsity along with four other freshmen, and the following year we were brought up to varsity together. Not only are we a senior heavy team, but most of us have been playing together since our freshman year which leads me to believe we are capable of accomplishing great things this upcoming season.

You and junior setter Cammie Quirk make a dynamic combination. Tell us about your relationship on and off the court.

Cammie has done a great job adjusting to playing a new position. It is especially difficult to move from an offensive position to setter, but Cammie is a competitor and has worked hard to excel in the position. This past high school season was crucial for developing our setter to hitter chemistry, as we all have one more season left of playing together. But now I expect that with a great season already under our belt, things will only get better. In a non-covid year, my answer as to off the court relationships might be different, but it was essentially a virtual school year.  During the season we are generally a tight knit group and try to get together after games and some practices, even if just to eat out somewhere.  Hopefully, we will have an opportunity to spend more time socializing as a team together this upcoming season.

Ridgewood was 14-3 in the Spring with 2 of their losses coming to Big North rival Northern Highlands. Do you think you can turn the tables on the Highlanders this fall?

I think that with everybody back and healthy on our team, as well as a full pre-season to prepare our team is capable of competing with any school. The Highlanders are a great team; however, I feel that this year especially, we will be able to step up and compete with them.

When feeling the pressure in a game situation, I think back to something my club coach Artem Makarenko frequently told our team. He reminded us that volleyball is a game of mistakes, and you win by minimizing your own mistakes. This mindset helped me to not get caught up on my errors, and rather realize that in order to win under pressure, all I need to do is minimize my own mistakes. For example, when serving at 23-24, I remind myself that in that moment, all I need to do is get the ball into the court and trust my teammates to respond to the other team’s offense.

The most important lesson I learned through playing volleyball is that attitude can either lead to your success or your defeat. Going into a game with the mentality that the other team is not capable of competing with you, or that it will be an easy win almost always leads to a loss. I try to approach every game with the mentality that the team on the other side of the net is going to fight for every point, and that nothing will be handed to my team.