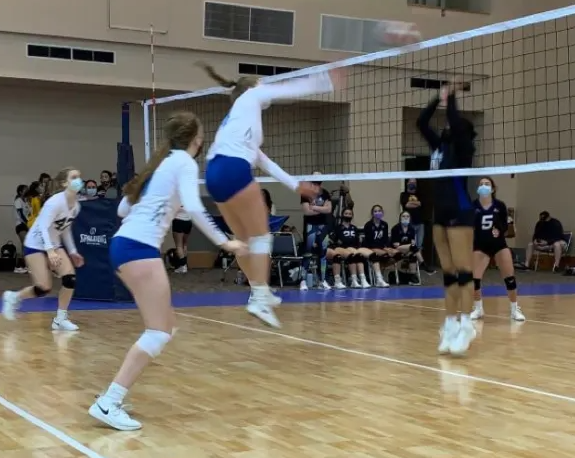 Randolph High School has a very promising player on the rise for their varsity girls volleyball team, that would be current junior middle-hitter Isabella ‘Izzy’ De Nigris.

I took some time to chat with Izzy about Randolph volleyball and her development as a volleyball player.

“I live in Randolph, New Jersey and have been attending Randolph High School for two years. I graduate in 2023,” she continued, “I was raised in Edison, NJ up until my parents had my younger brother, Luke. We moved to Randolph when I was 4 years old and have been here ever since.”

“I was in eighth grade when the high school volleyball coach noticed my height and said I would be a good fit to play,” De Nigris said.

From that point, her parents Gina and Jared signed Izzy up for volleyball clinics and camps—she immediately knew that this was the sport for her.

The Randolph middle-hitter stands 5’10” and can take off into orbit, owning a 19” vertical. De Nigris plays her club volleyball at Xtreme Volleyball Academy in Ledgewood, NJ. While Izzy is a middle-blocker by trade, she likes playing from the outside or opposite positions, as well.

At Xtreme, Izzy has really worked well with the coaching staff to become the best player she can be.

“All of the coaches I’ve had make it a priority to form a bond with you and make you the best you can be,” De Nigris said, “My main coach, Braulio, is amazing and has helped me improve so much in such a short amount of time.”

In terms of Randolph volleyball, the junior middle-hitter is confident in the team’s chemistry, in addition to the returning players.

“Our upcoming high school team has a lot of potential. Most of the players will be returners, and there is a strong bond between all of the girls. I believe that this bond could be the key to success,” she added, “We all know each other very well and combined have a lot of talent. This season may throw challenges our way, but with team practices and new strategies, I truly believe we have a good shot at this upcoming season.”

Randolph has a lot of depth in their volleyball program, but De Nigris mentioned three players in particular that can make an impact.

“This year, we have a lot of returning seniors. My teammates, Amanda Pizzi and Emma Thauvin, are two of these seniors that I believe will stand out this season. When the two of them work together, they display great talent. On and off the court they are both great people,” she continued to say, “I also think that the upcoming junior, Moira Durkin will show a lot of talent this season. Her swing is amazing and could add a lot to the game. All of my teammates have special qualities and I think we will all have an impact on the new season.”

As a returning middle-hitter for Randolph, Izzy had the opportunity to learn from Natalie Riback.

De Nigris said, “Having such a great teammate like Nat really helped me during last year’s season. I was thankful to have her to look up to because I was new to the team, and still had a lot to figure out.”

“She [Neusner] and I developed a great chemistry early on in the season. She knew what kind of sets worked best for me, and this helped with my success,” Izzy mentioned.

“Coach Data is great, she is caring on and off the court and is overall a great coach. She always knows what we need help with and can fix our mistakes in no time,” Izzy said.

De Nigris is considering playing volleyball after high school, however she is still looking at schools and trying to picture where she could see herself playing at.

Now, playing sports is almost always made possible by a student’s parents. For Isabella De Nigris, this is no different.

Izzy said, “My mom and dad are my biggest support group. The amount they do for me is insane and I am truly lucky to have them support me through everything.”

Most volleyball players have a preference as to the beach or hard court. For De Nigris, she loves hard court. She noted, “I find it much easier to stay balanced and precise when I am wearing shoes on a hard court.”

When Izzy is not playing volleyball, she can typically be found behind a piano.

“I started when I was in fourth grade and ever since, I fell in love with the instrument. I had a great teacher to help me get to where I am now and I have been to countless concerts,” she said.

If Randolph volleyball is going to have a successful year, building off of last season’s momentum, Isabella De Nigris will be an integral part of the team from both the offensive end and defensive end.