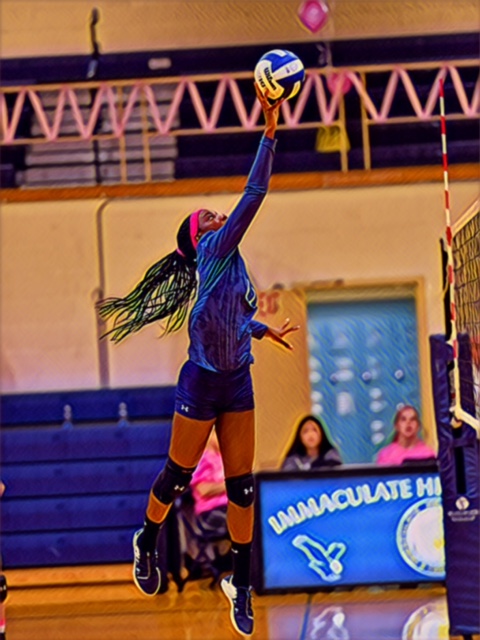 We had the opportunity to watch two games this afternoon, The IHA and Bogota battle in Bogota and Old Tappan visiting Clifton. So we are starting tonight blog with those two match-ups.

We expected IHA and Bogota to be very close. With a #1 vs #3 matchup and the #3 being at home, we thought it may even go three sets. But Immaculate Heart just didn’t make mistakes today. Closing both sets at 10 point margins would typically be called dominant. Bogota was obviously talented but could not come up with a consistent attack to stay close. As usual, it was extremely tough to get balls down on IHA. Bogota seemed a bit frustrated by some solid attacks being returned. And IHA’s offense was well balanced and used all members of the Blue Eagle attackers. IHA looks super solid, as usual, and is off to a great start. Bogota is super talented, but it just was not their day today.

The #23 Old Tappan at #53 Clifton game was a back and forth battle were both teams would just not give up. At the start, it looked like Old Tappan would dominate the Mustangs as the blasted out to a first set win at 25-14. They got off to a good start in set 2 but could not build a large enough lead to feel comfortable as Clifton kept it close. It looked like OT would close out set 2, but Clifton put a nice streak together to come from behind and take the second session. The third set was much the same with the Golden Knights leading for the majority of the set and Clifton surging at the end. Clifton fought off at least 4 game points during extra time in an extended set but could not put the Mustangs away. Clifton took their first lead at 29-28 and then closed it out on their first game point. Kate Louer was just outstanding during the match. We don’t know final totals of stats but we just so impressive on key points as well as throughout the afternoon. It was awesome to see Jola Olutiola back on the floor for Old Tappan for her senior year. Both these teams look super solid and should have outstanding seasons in the Big North.

What a statement by Brick Memorial as they take a three set opening day home victory from #4 Southern. Kate Stoughton is just a rock star. She put away 16 kills, had a block and 10 digs and even managed 5 aces in a stellar effort for the senior. She is setting the stage right from the first game for a run for player of the year.

#17 Hunterdon Central bounced back from yesterday’s loss to Hillsborough with a straight set win over #46 Bridgewater Raritan. Kailyn Riggi didn’t let many balls drop as she recorded 16 digs in the match. Mevelyn Brazoban had 5 kills and 5 blocks and Kelly Templasky had 6 kills for Hunterdon. Good opening night for BR and they stretched Central to 27-25 in set 1 and stayed very close to the Top 20 Red Devils.

Josie Marcinek and Aileen Xue had 8 kills each as Hillsborough went to 2-0 in a straight set win over Montgomery. Awesome performance by Georgia Wess for Montgomery who registered 8 kills and 6 digs.

#22 Kent Place looked absolutely dominant today with a big win over #35 Union Catholic. The front row of Lauren Osuala, Sabrina Skyers, and Iman Handy is one of the most formidable in NJ. Skyers had 9 kills and Handy and Osuala had 8 each as UC just did not match up. KP held Union Catholic to just 8 points in set 2. Margeaux Morial had 23 assists for Kent Place.

Monroe jumped to 2-0, as they defeated rival South Brunswick in a tight three set match. The Falcons avenge two losses this Spring and are off to a great start in the GMC. Monroe will be part of the big tournament this Saturday in Williamstown and will face some super competitive opponents.

#20 JP Stevens defeated Old Bridge in straight sets to move to 1-0 in the post-Simi Carlsen era. Cinnaminson edged Collingswood powered by 6 kills from Rosemary O’Brien and 7 aces from Zara McNair. A nice opening win for PCTI over Wayne Hills to open both their seasons. 4 kills from Victoria Mistretta and 9 digs from Kamila Cordero.

#62 Livingston just got passed #82 Caldwell in three sets despite 6 kills and 5 aces from Christine Infantalino and 5 kills and 2 blocks from Ava Pannullo as well as Lulu Ceccon putting up 4 aces, a block, and 5 aces.

Westfield was all over Scotch Plains Fanwood as they defeated them 25-17, 25-10. Westfield had a balanced attack with Chloe Wiedman, Caitlin Cabreles, and Taylor Addis contributing 4 kills each. SPF, without Adelina Berisha for the first time in 4 years, fell victim to a solid Westfield team that beat Scotch Plains twice this Spring.

Morris Catholic came out strong and defeated Dover in straight sets. Sofia Mattingly had 3 kills and 4 aces in the win and Emma Duphiney scored 5 aces.

In a big surprise for us, Sparta defeated Mendham in three sets. The Spartans used their home court advantage and took the third set 25-22. We expected Sparta to dip a bit after losing NJP player of the Year Mackenzie Wiggins to graduation. But NJP’s #2 team in the Spring, looks very strong at the starting gate. Mendham is going to be a tough team to beat as we get deeper into the season.

North Hunterdon got by Ridge today in three sets. 11 kills from Elise Oertel, 28 assists from Emily Wolters who also posted 5 kills and an ace, and Colleen Russell had 7 kills and 2 blocks. Chelsea Tancredi popped 8 kills and 2 aces for Ridge.

Andrea Enabosi had 10 kills and Olivia Willemsen added 8 kills to power Piscataway over Colonia on Thursday. Ava Atienza had 26 assists in the three set match. Nicole Sullivan led Colonia with 7 kills and 13 assists.

In other matches, Shawnee defeated Cherokee in straight sets in this Olympic match-up of powerhouse teams. Mount Saint Mary surprised Voorhees in a tight three set match in the Skylands. Wall edged Red Bank Regional despite 6 kills from Camryn Stack. Lyndhurst, jump started by 11 kills and 6 digs from Steph Mizeski, drubbed West Milford in their opener. Jefferson got 10 kills and 19 digs from Mackenzie Rock to lead the Falcons over Morris Tech in straight sets. A big night for Bryn Bautista as she fires 11 kills as Washington Township rolls over Pennsauken Tech. And Roxbury edged a pesky Mount Olive squad to open their season at 1-0. Cherry Hill East smacked Seneca in the Cougars opening match. And Vianney rebounds from yesterday’s loss to Donovan Catholic with a straight set win over RFH. Erin Gretsky with 8 kills for the Lancers.

Full slate tomorrow with another 60+ games on the schedule…

We are going to try a new feature in the blog called “Lock of the Day”. We will pick games that we feel are 99% sure one team will win. We may have one or a few per day… and will look to keep our streak alive all season!

When members of the NJ volleyball community need our help, we have had great responses from NJP fans in the past. This one is slightly outside of NJ, but worth a read and consideration. Thanks for considering this… https://www.gofundme.com/f/one4mon-hope-for-a-better-tomorrow

Make sure to check out the “The Feed” page on the main menu… all third party links to volleyball articles and content throughout NJ.

NEWS FLASH: Check this out… on Peyton Oliver sophomore from Ramsey. More at https://providence.jwuathletics.com/sports/wvball/2021-22/releases/20210908p8h21h