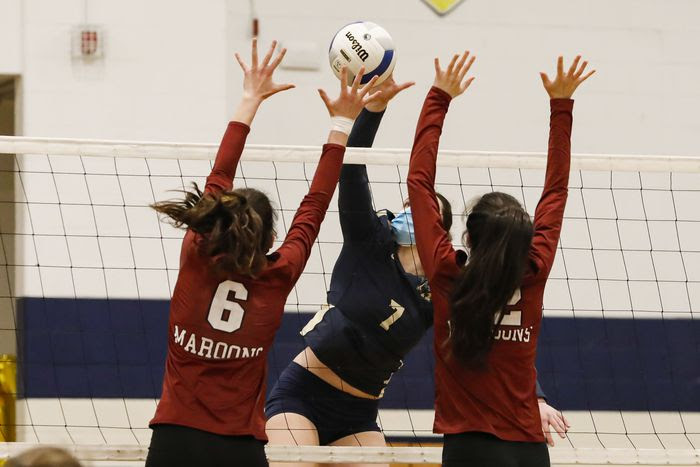 Abby Franks can block with the best of the NJ high school girl volleyball players. The 6′ middle finished in the top 10 this Spring during the shortened season, tallying 27 rejections. She had 56 blocks the year prior as a sophomore. But the Indian Hills senior may be in a unique position for the Braves as she shifts to outside hitter this season, plays six rotations, and gets much more opportunity to excel on the attack.

Franks has so much to look forward to this year and in the future. She will settle in as a go-to attacker and leader on her team as a senior. We expect an even bigger breakout season for her as her time on the court rises. She has a solid pedigree and has been playing for the DIGS 17 National Red team, considered an elite club team in NJ.

Abby has been a standout middle blocker in her volleyball career. She has great instincts around the net, a strong vertical, and a tall and athletic frame which are all traits that lends to being a superior blocker. She has developed her defensive skills on digging on serve receive. And we expect her to be solid on the attack from the pins in addition to the middle.

After her interview, we expected Abby to be interested in writing or marketing or public relations. She has a wonderful writing style and wit. But she aspires to be a doctor and we totally expect her bedside manner to be stellar if she accomplishes that goal. She handles herself so professionally for a high school student and it’s easy to see her intelligence level and maturity. We expect great things from Abby both on and off the court moving forward.

Here is our interview with Ms. Franks…

Hi Abby. Thanks for joining the NJP player interview club. Tell us a bit about yourself?

I am a class of 2022 senior at Indian Hills High School. I live in Oakland, New Jersey with my parents Bob and Kathy, older sister Elizabeth who is a sophomore at Montclair State University, and twin brother Matt who plays football for our high school. I also have two rescue dogs who always keep life new and exciting.

I was a competitive gymnast up until eighth grade, but when my legs were too long and kept hitting the uneven bars each time I swung back, I realized my height would be more beneficial in another sport. My dad and grandpa had always told me that I had big hands (I guess that was a compliment) and that I should play volleyball. The same day I stopped doing gymnastics was the same day I began playing volleyball. I remember my dad picking me up from gymnastics saying, “hurry up Abby and put on your sneakers, we have somewhere to be!” When I asked him where we were going, he told me not to worry about it, but to fix my hair because it was a mess. Once we pulled up at Indian Hills High School, he dropped me off and said that today was my first day playing volleyball. I was so excited that I leaned over, hugged and kissed him goodbye, and ran towards the gymnasium knowing that I had already fallen in love with the sport.

I am a 6’0 tall middle blocker/outside hitter with a standing vertical of 25 inches. I play for DIGS Volleyball and as of right now, I would say my favorite position is middle blocker, but then again, it’s the only position I have ever played. This high school season, I am needed as an outside hitter, so at the end of this season maybe I will know which I like better. Although, there is nothing quite as exhilarating as getting a monster block that echoes throughout the whole gym and being a middle blocker has allowed me to experience that feeling numerous times.

Tell us about your Indian Hills teammates. Who do you expect to be this year’s up and coming and standout players in the Fall?

Being that I am now a senior, I am realizing how to be an effective leader for my teammates, but as my dad always says, “you have two ears but only one mouth, so you should listen twice as much as you should speak.” My team and I operate in this manner because we listen to one another and welcome all new ideas and suggestions to make our team even more effective for this upcoming season. My teammates continue to amaze me every day with their hard work and unwillingness to give up until we reach 50 perfect passes in the butterfly drill, (not an easy thing to do). It is all about attitude, and I feel that all of our players have made definite progress since last season, and I cannot wait to see how much we can accomplish together.

You lead the Braves in both kills and blocks in the Spring season. What is a better feeling? Getting a big kill or a monster block?

Personally, I feel that getting a monster block gives me more of an electrifying feeling because no one is expecting it, especially the hitter on the other side of the net! Although, as my hitting has been improving over the years, I feel that I am continuing to enjoy the sensation of crushing the ball to the sweet spot and hearing that moment of silence right before the roar of the crowd commences.

I am still considering several possible paths that I see for myself. As of right now my focus is on finding a school that meets my academic needs and if they have a volleyball team, I intend on playing.  One thing is for sure, I do know that I love the sport and regardless of my future with it, it has undoubtedly made me a better person. It is my dream to be a doctor and I plan on pursuing a career in the field of medicine.

The Braves return just 6 of their 13 varsity starters after a winning Spring season where they finished 8-6.  How far do you think Indian Hills can go in the upcoming season?

I know that my team will travel far this season as we have both passion and determination that is continuing to drive us all every day. We have only had a few practices thus far, but we have seen what comes of hard work and tenacity. My team inspires me to do my very best each day because I know that they are giving it their all too. If we can make it our motto to play the game one point at a time, then I think we have a good shot at a great season. The opportunity for success is within reach, we just have to stay disciplined and trust ourselves and each other.

Tell us about your club experience at DIGS…

My time at DIGS has been one of the most welcoming and unforgettable experiences of my life. I always felt that my coaches were my mentors and that I could talk to them about anything because I knew that they cared about me. I forgot what it was like to play a team sport when I was in gymnastics, so for me, volleyball reignited that flame that made me passionate about succeeding not only for myself, but for my teammates as well. Playing a team sport has helped me understand when to hold myself accountable and when to hold others accountable too. I will cherish the memories I have spent with DIGS because they are a second family to me, and one that has taught me how to be a better person along the way.

The athlete that I look up to as a role model most is Muhammad Ali because he believed he was the best even before the rest of the world did. His confidence in himself is what led him to be the Greatest of All Time. The quote he lived by was, “float like a butterfly, sting like a bee.”

Being an athlete makes me a better person because it has taught me how to take responsibility for my actions and that if something goes wrong, I need to do something to fix it. What volleyball has taught me can be translated into the real world because I think it is just as important to be a team player both on and off the court.

My family motivates me every day to change the world for the better. Every morning I wake up knowing that I will make a difference, even if it’s small, because I have loving friends, teammates, and family who support me and help make my dreams possible.

When you go to lunch with your setter… volleyball is life! https://www.instagram.com/p/CT-ECcblyw4/?utm_medium=twitter

Nobody likes surprises. Please, please, please send us your tournament info if participating in one this weekend or in the future ok? Wait… did we say please? https://www.instagram.com/p/CT93-KaAbHT/?utm_medium=twitter

Which NJ high school volleyball players are in the top 100 in each stat category including per set stats? Find out at http://njpowerranking.com https://www.instagram.com/p/CT9ExNtLQ_H/?utm_medium=twitter

Girl’s blog is up at http://njpowerranking.com. Big Friday night of volleyball in NJ. https://www.instagram.com/p/CT8sNWSsMCM/?utm_medium=twitter

Update on NJ HS girls volleyball unbeaten list at http://njpowerranking.com. Which teams do you think will be on the list at the end of the month? Cast your vote! https://www.instagram.com/p/CT73kyEl0AM/?utm_medium=twitter

We take a look at some of our NJ high school girls volleyball super sophomores at http://njpowerranking.com. https://www.instagram.com/p/CT6LG6asTSL/?utm_medium=twitter