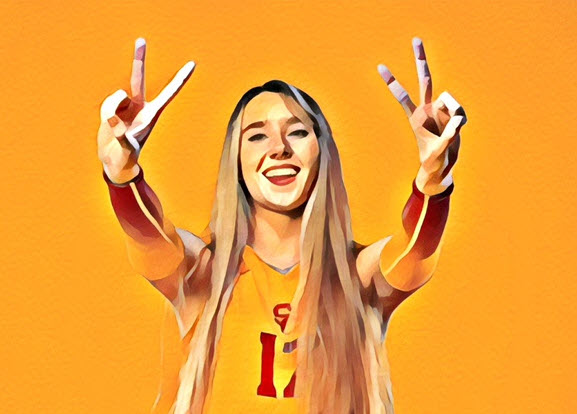 It’s the first weekend of the season and there are multiple tournaments around the state, with a very big one in Williamstown. There was also a marquis match-up of NJAC rivals with Sparta taking on Roxbury.

The tournaments start early and go late. We will attempt to get complete updates and post them later tonight or Sunday.

Sparta was the #2 ranked team last Spring and had the NJP player of the year Mackenzie Wiggins on their roster. Mackenzie has moved on the play D1 college volleyball at Iona. And Sparta has yet to miss a beat with an infusion of young talent including freshman Aralyn Saulys and sophomore’s Emily Smernoff and Payton Simpson as well as more seasoned players in rising juniors Brynn McCurry, Caroline Mastandrea, and Arianna Puleo. They finished 16-1 overall and 10-0 in the NJAC.

Roxbury and Coach Anthony McMichael have been waiting for the perfect storm of young talent to emerge as leaders and this is the year that it is happening. After their young team went 10-3 overall in the Spring, and 8-2 in the NJAC with both losses coming to Sparta, they would love to return the favor this season and get a bit of payback. They are stacked this season with rising junior Victoria Latino at outside, and seniors Sammy Olander and Mia Capriglione up front. Junior Lorie Horta returns after posting 262 assists in the shorted Spring session and Isabella Chan has taken the libero role after 151 digs as a junior. When you add senior transfer Maia McNeil upfront, you have a dominant front row that can score at will.

Roxbury knocked off an excellent Mount Olive team in their first game and Sparta disposed of last years Sectional Champ Mendham in three sets. Both teams are 1-0 entering today’s clash.

The game was everything that it was billed up to be. The first set went to extra time with Sparta edging out a 26-24 victory. Roxbury was up 18-16 in the second set and Sparta exploded past the Gaels to win the second set 25-20. Josh Wilets was at the game and we look forward to his colorful recap coming later. Sparta is in the early season driver seat with wins over their two arch rivals in their first two games.

Great to see former JP Stevens star Simi Carlsen having success as a freshman at Johns Hopkins. She is in the starting line-up and posted 6 kills in her first game. Story here: LINK

Our first ranking will be next weekend so we have enough statistical data to have an accurate confidence level. Predictor game scores projections will happen after that… for those new to NJP, we have been able to form an algorithm and ranking system that provides an 86% accuracy level in picking games.

In our final tribute for the 20 year anniversary of 9/11, we wanted to set the stage for what we think is the greatest Super Bowl halftime show of all-time. Understanding the landscape at the time, 4 month post 9/11, there was still anxiety in the air and an anticipation of what was going to happen next. The World Trade Center site had just stopped burning after 100 days. There was unity in our country and sports were a huge release for many American’s to focus on something other than the news and the aftermath. Most of downtown Manhattan remained closed and looked like a war zone. As you came through the toll booth at tunnels leading to NY, there were soldiers with M16 rifles checking every vehicle. The world had changed forever and people were still processing the happenings in disbelief.

This performance gave me chills… it made me cry… and it instilled a spirit of resurgence in a city that had a long way to go to rebuild. But there was hope… the video is 6 minutes of your time well spent. I still play it regularly as it brings me back to that time period and memories that still echo in my mind after 20 years…