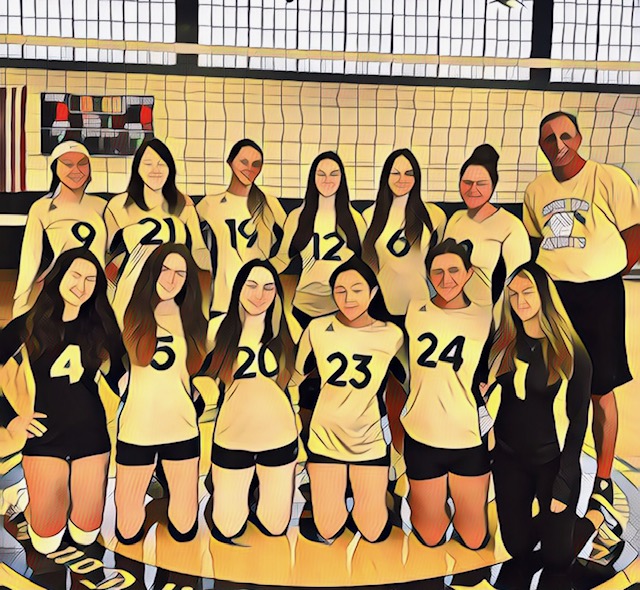 Another busy Tuesday night as the NJ high school volleyball season heats up for the girls. We are going to jump right in and take an inner look at some of tonight’s game results:

After knocking off Southern in their first game, Brick Memorial got taken down by Toms River East today in a surprising outcome. Despite Kate Stoughton knocking in 10 kills, the Raiders got great all-around performances and won in straight sets. Claudia Cosme had 9 digs and 2 aces, Rebecca Keith had 4 kills and 2 blocks, Megan Currie had 12 assists, 2 aces, and 2 kills, Melissa Marvinny posted 4 aces and 2 kills, and Shannon Dunaway slammed 6 kills and a block as everyone seemed to come together for the big game against the Mustangs. TRE with a statement win is now 3-0.

Rachel Shaw exploded for 9 kills and Christaleigh Amilale had 15 digs and 2 aces as Northern Burlington extended their win streak to 4 over Cinnaminson. Taylor White added 6 kills, 6 assists, and 6 digs in a devilish performance. Northern Burlington is solidifying their place at the top of the BCSL thus far.

South buried North in the battle of West Windsor-Plainsboro. South has been brilliant and is now 4-0 and North has had a rough start at 0-4. WWPS won their tournament this past weekend and is showing they are a team to reckon with in the state rankings. We look forward to see where they will land in this coming Sunday’s first NJP ranking. Skylar Hendrick and Sibana Gonzalez both had 6 kills with Sibana adding 4 aces and Skylar adding 6. Maria Theruviparambil had 5 kills, 2 blocks and 2 aces for WWPS. It will be the battle of the undefeated on Friday when 4-0 WWPS takes on 4-0 Northern Burlington at WWPS. Should be a burner!!

What a thrilling night for Westwood as the Cardinals take care of business at home and upset Bergenfield in straight sets. Grace Mohr and Cassidy Orbe had 4 kills each and the Cards outdug the Bears 26-14. Nice performance by Lauren Smith with 9 digs, 3 kills and an ace.

In a rather odd beginning, Point Pleasant Beach has strung together 5 straight three set wins to start the season at 5-0. Tonight’s victim was Red Bank Regional. The squad seems to have a high level of versatility and has numerous swiss army knife contributors who bring a wide variety of talents. So far this season, they have ten players with kills, 6 players with double digit digs, 8 players with assists and 8 players with aces. They are averaging 33 digs per match and will benefit from this scrappy play going forward. The Garnet Gulls are currently flying high and are hungry to keep the streak alive at Asbury tomorrow..

Sterling looks like a BCSL powerhouse thus far. They have not lost a set this season and improved to 4-0 with a drubbing of Pennsauken. Senior Allison Kowalewski has had an awesome start on a senior-laden squad that has been super in their first two weeks.

Freehold Borough got their first win after squeaking a victory from Middletown South n straight sets. The second set went 31-29 with a pesky South group that is improving in their second varsity year. Sofia Hor and Jada Lao each had 6 kills and 6 aces while Julianna Esteban and Audrey Sousa added 7 and 5 aces respectively. FB was on fire from the service line tallying 25 aces.

Another outstanding performance by Kent Place as they move to 4-0 by outlasting Elizabeth. Lauren Osuala with 10 kills and 4 aces, Iman Handy with 5 kills, a block, and 4 aces, Sabrina Skyers with 7 kills and a block. Margeaux Morial had 22 assists for the Dragons. Union and SPF next on the schedule for KP.

Lodi Immaculate is now 2-0 after knocking off Saddle Brook in straight sets. Anastasia Pesantes had 15 assists, 5 aces, and 6 digs as quarterback while Brianna Kirkland and Sydney Kropiewnicki added 6 kills each.

Summit was able to neutralize Linden’s Esther Babatunde en route to a straight set win over the Tigers. Vivian Roberts with 9 kills, Zoe Zacharias had 16 assists and 5 digs, and Hope Basaman had 6 aces.

Southern is back in winning form as they beat a solid Jackson Memorial team who is coming off a big tourney win this weekend. Hailey Krause logged 8 kills, 7 digs and 3 aces for the Rams as Molly Regulski had 21 assists and 2 aces as she settles in to the setter role. Southern came back after losing the first set to the Jaguars. Jordyn Hamlin had 6 kills and 12 digs for the Rams who are home tomorrow in a tough match against Hunterdon Central.

Nice performance from Morris Knolls as they knock off Kinnelon in straight sets to move to 2-0. April Faber had 21 assists and 6 aces as well as 5 digs and a kill. Leah Mackey was outstanding for the Golden Eagles with 7 kills, 9 digs, and 3 aces. Maya Frommelt and Carly Wemmlinger each had 5 kills while Maddie Knack had 3 kills and 2.5 blocks. Jolie Parisi had 12 digs for the “Super Six”. We will get a good indication of Knolls power rating when they face Morristown on Friday and Mendham on Monday.

Recognizing two stellar performances by Red Devils during Hunterdon Central’s slim victory over Phillipsburg. Amanda Shirk posted 5 blocks for the match in addition to 4 kills, 5 digs and an ace. Also, Grace Sollner had 13 kills, a block, an ace, and 8 digs. Performances like these will keep HC in the top 20 rankings.

Fourteen kills from Mackenzie Rock leads Jefferson to a tight two set win over Montville. The Falcons are now 4-0 and put up 59 digs in the match. They also fired 9 aces with 4 from Emily Carcich.

Mountain Lakes is off to a great start at 2-0 after bringing down Villa Walsh today. Shelby Stanton had 11 kills and 7 digs and Amanda Castillo had 6 kills, 6 digs, 2 blocks, and 4 aces for the Lakers. Sheridan Caughey had 7 kills and 3 blocks for Villa Walsh.

Monroe continued their undefeated streak with a straights set win over Old Bridge and are 3-0 to start the season. Cherokee got their first slash in the win column defeating Eastern in straight sets. Lyndhurst is now 3-0 after handling NJIC rival Dwight-Englewood in straight sets. Barnegat improved to 4-1 by bumping off Manchester Township. North Hunterdon is now 6-0 after disposing of Montgomery in straight sets.

Ridge is now 3-1 after beating Bridgewater Raritan in straight sets powered by 10 kills from Chelsea Tancredi. Princeton outlasted Hopewell Valley in three sets with strong performances by Shakthi Sreenivas and Ayo Ince. Toms River North is 3-0 after defeating Brick Township driven by 7 kills from Jessica Spaletta, 22 assists from Riley Budenas, and a block and 6 kills from Victoria Laudien.

Make sure to check out the updated NJP News Feed at this link… https://njpowerranking.com/the-feed/