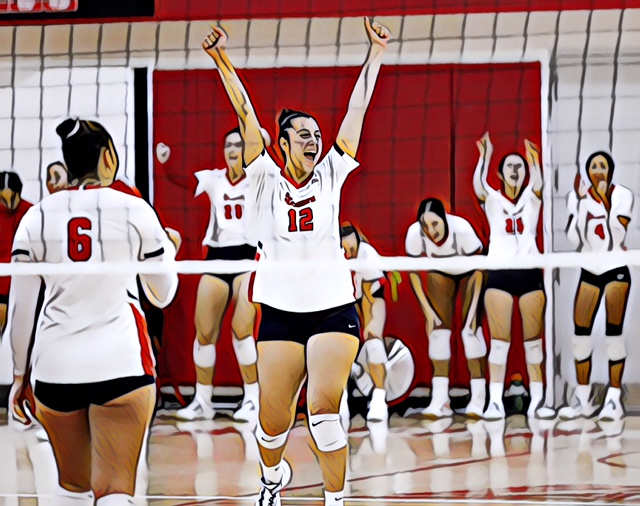 Week two is underway for the NJ high school girl’s volleyball season and we have started to get results from a packed Monday night schedule. Coming in to week 2, 62 teams have yet to play a game, so looking forward to seeing some results from those squads. Included in the list are MKA, Marlboro, Jackson Liberty, Tenafly, Ramsey, Pascack Valley and Pascack Hills, Mahwah, Holy Angels, Fair Lawn, Ramapo, and Northern Highlands to name just a few… but many are on the Monday schedule.

Nathaly Flores put up more points for Union City than the entire Kearny team as UC routed the Kardinals 25-4, 25-5. Flores had 12 kills and 5 aces for the Soaring Eagles. UC should sweep up on Hudson Valley foes but has arch rival Hudson Catholic tomorrow. We will see if they can stay close to the Hawks in Fall 2021. Also wanted to recognize the nice effort by Scarlett Torres who had 19 assists, a kill, and 6 aces.

Sofia Bell of Tenafly had the best game of her high school career smacking 10 kills in the Tigers rout of Ridgefield Park. Tenafly does not have a senior on their roster of 7 but they are a magnificent 7 on the floor and we expect them to have a great year with Bell, Theuerkauf, Koehler, Milionis, Tapia, Taufield, and Chung on the floor. The Tigers next three games are Pascack Valley, Old Tappan, and Demarest so we will get a good gauge on talent.

Summit is now 2-1 as they ripped past Johnson today 25-21, 25-14. Junior Vivian Roberts and Sophomore Hannah Barlow have been hot in the early goings for for the Hilltoppers. They will face a Linden team on a roll tomorrow. Linden started the season with 2 wins and then took JP Stevens to three sets. Linden doesn’t let anything drop and are powered on the attack by middle blocker Esther Babatunde who already has 29 kills and 9 blocks.

Notre Dame surprised Hopewell Valley in three sets, the last going 28-26 in a battle of BCSL teams. Hopewell actually outscored the Irish by one on the night but it was ND who takes away the victory. Freshman Maia Cinca is for real as she smashed 10 kills in the match and added 3 blocks and 2 aces. In her first three game at high school, she has 21 kills, 5 blocks and 9 aces. Not too shabby for a frosh. Cassady Smith, another freshman at ND posted 9 kills. Looks like the Irish will be setup for success with this young duo in place for the next few years.

Pascack Valley starts up their season with a bang jumping all over Holy Angels. Taylor Grady with 14 assists, 7 kills and an ace and Kaleigh Higgins also adds 14 assists a kill and 2 aces in their debut. Noelle Salimano, Sabrina Hirsch and Nicole Buckley all had great nights on the attack. PV will have its hands filled this week with upcoming games against Northern Highland Wednesday and Tenafly on Friday, followed on the schedule by Bergenfield, Old Tappan, Ridgewood and Demarest. Wow that’s life in the Big North!

Passaic Valley started their season today with a win over DePaul. PV senior Carissa Ostolaza exploded for 17 kills and 9 digs and also blasted 8 aces in the three sets. Stunning performance from this Hornet.

Alicia Idiculla from River Dell and Jola Olutiola from Old Tappan faced off today in a Big North battle today in River Dell. Alicia popped in 9 kills and 7 digs. Jola jammed 12 kills and a block but River Dell sustained a tight straight set win over the Golden Knights. River Dell jumped to 2-0 on the young season and Old Tappan dropped to 0-2 after their earlier tight loss to Clifton. Sweet game by RD senior Davan McHale who had 19 assists, 4 kills and 3 digs. Emma Ehalt added 5 kills and a block. For OT, Sam Kranzler had 5 kills and 5 digs, while Emma Gabo had 16 assists and 8 digs in a losing cause.

Barnegat edged Brick and moves to 3-1 after their opening day loss. They won their tournament this past weekend and seem on track to return to their top 30 preseason ranking. Ashley Berger had 7 kills and 7 digs, Valencia Gosser and Avery O’Cone had 8 kills and Gianna Gerkins had 7 kills and 2 blocks for the Bengals. But the big story was Patria Moreno who had 30 assists, 5 aces, 8 digs, and 5 kills in an awesome performance for one of NJ’s best setters.

In the UCC, 2 big games on the tap today. Kent Place established themselves as the team to beat easily knocking off Westfield in straight sets. 6 different players had blocks for Kent Place and Lauren Osuala and Iman Handy had 7 kills each. Chloe Wiedman and Carly Rodrigues played well for the Blue Devils. Union upended SPF in a close three set match. Ezinne Amadi had 14 kills, and Ojuolape Odusanya and Ashlynn Berns each added 11 kills, in a powerful display of up front talent on the attack.

Maddie Oehme had 6 kills and 2 blocks and Laine Kulpinski had 17 assists, 2 kills, and 2 aces as Donovan Catholic jumped to 3-0 with a win over Toms River South. TRS is missing their 6’4″ graduated Indian Kelle Anwander who is now playing at NJIT.

In other games, Verona is now 5-0 after blitzing West Essex in straight sets. Paramus is 2-0 after defeating Teaneck in straight sets powered by 4 kills and 2 blocks from Mary Clark. Fort Lee is 3-0 after squeaking past Mahwah in three sets with Ava La Vigna lifting 15 digs for the Bridgewomen. Paramus Catholic put up their first win of the season powered on the attack by Sydney Salazar, Tyaja Thomas, Taylor Riccio, and Cristina Collins. West Milford routed Paterson Eastside in their opener driven by 4 kills each from Skyler Ribitzki and Sam Araujo, as well as 5 aces from Amelia Liebau and Olivia Arciniega. Bridget Lonergan had 7 kills and 3 blocks as MSDA dropped Belleville in straight sets. Northern Burlington looking really strong at 3-0 as they surprise Moorestown in straight sets. Sparta drubbed a very good Chatham squad as they continue their early season onslaught. And Mother Seton is now 2-0 after taking down Highland Park this afternoon.

Sorry we can’t get to all the great performances on a given night due to volume but will try to mix in as many schools and players as we can.

If anyone has information on the volleyball tournament at Snyder this weekend, please send it our way.

USA Today National ranks for week 2 are up at https://njpowerranking.com/2021/09/12/usa-today-national-regional-high-school-rankings/

Some updates “Faces” have been posted as we honor some of NJ’s best players and portray them as the heroes they are to the NJ volleyball community. You never know who is going to pop up. And recipients don’t know either. We hope you all appreciate the spirit that these are created under, but don’t be afraid to send us a cease and desist order by email if you hate the portrayal. 🙂 https://njpowerranking.com/njp-faces/

Don’t forget to tune in to all your favorite NJ college players are doing as their seasons have begun at https://njpowerranking.com/nj-girls-college-players/

Less than a week away from our first ranking of all 300+ teams, stat updates and analysis, our nightly game predictor, and some other surprises… Stay tuned!!