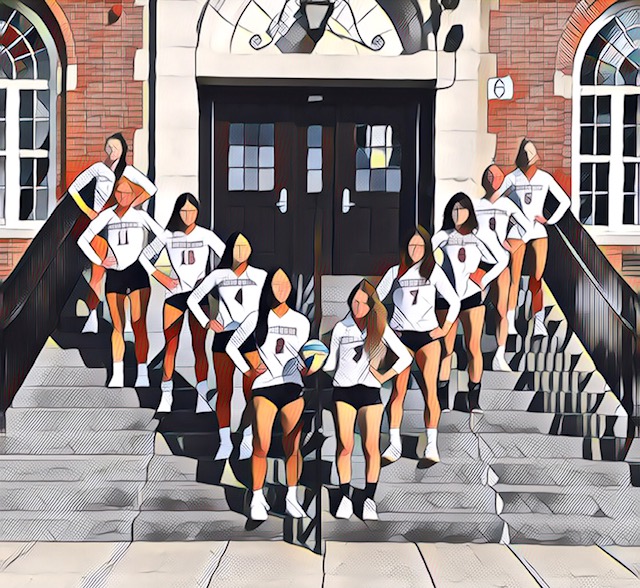 We will start with tonight’s inner look on NJ HS girl’s volleyball:

Signature win by #10 North Hunterdon over Hunterdon Central tonight will continue to move them up in the NJP rankings. This is always a big rivalry game. Junior Colleen Russell rose to the occasion with one of the best performances of her career with 6 kills and 2 blocks for the Lions. Tori Kuo had 3 aces and 7 kills in the big win. The Lions are now 9-0.

Mary Huegel had 9 aces and 4 kills as Colts Neck improved to 4-0 with a lopsided win over Middletown North. Junior Maddie McSorley had 12 digs and 3 aces for the Cougars giving her 63 digs in four, straight-set matches.

Morristown has showed so many positive signs this year after a difficult Spring season. But Mount Olive has been equally as impressive this season and clipped the Colonials in a tight three set match in Morristown. Sienna Volpe (7 kills, 3 aces), Gabby Forero (6 kills, 8 digs, 4 aces), Ava Padwelka (12 assists, 4 kills, 1 block), and Amethyst Garcia (4 kills, 2 blocks) powered the win for the Marauders. Mt. Olive will now have to survive the test of having West Morris Central and Roxbury next up on their schedule.

Bogota has been very strong since their opening day loss to IHA. Kudos to Emerson for pushing them to the limit. Ashanna Caviness continues to be a star as the junior collected another 14 kills bringing her season total to 68 in 6 matches. Mia Pimental had 28 assists as well as 11 digs and 4 kills and Gyanna Hernandez posted 7 kills as the Buccaneers continue their onslaught on NJIC opponents. Would love to see them add a couple of more top contenders to their schedule to help them hang with the NJ elite in the rankings. Also recognizing a great performance by Alex Belevan from Emerson who had 8 kills, 3 blocks, and 7 digs against Bogota.

Vianney improved to 8-2 with a straight set win over Wall. Erin Gretsky added to her already impressive Fall resume with 7 kills, 2 blocks, 4 digs and an ace. The Lancers had 11 aces for the match.

Wayne Valley took it to Paramus today, re-asserting themselves as a Big North power. Isabella Borowinski had 7 kills. Paramus out-blocked Wayne Valley, but could not stay close in the other stat categories getting out-aced 10-1, and out-killed 21-11. Wayne Valley is 4-2 but have lost to IHA and Demarest, two of the best teams in NJ. It would not surprise us to see this team run the table on their schedule until October 21st. On that day, Coach Jason Carcich will face his daughter Emily, one of the best setters in the NJAC, as they take on Jefferson. Great story to follow…

Speaking of Jefferson, Emily Carcich had 16 assists, 8 digs, and 3 kills as the Falcons improved to 6-1 with a big win over Morris Catholic. Mackenzie Rock with 12 kills.

Nathaly Flores and Mathilde Karskens each had 11 kills as Union City swept passed West Orange in straight sets. Karskens also had 5 aces. The Soaring Eagles continue to identify themselves a Top 20 team thus far in the season and will look forward to their rematch with Hudson Catholic on 10/4.

Kate Stoughton put up another 10 kills and 4 aces as Brick Memorial wins the battle of Brick. Memorial has had a storied season thus far beating Southern, TRS, and Jackson Memorial, and now Brick Township. Township continues to struggle at the shore and is winless in 6 outings.

Lacordaire Academy kicked off their season today and ran into a Payne Tech buzz saw. The Lions have had a strong season thus far and improved to 4-2. They will have a big test tomorrow when they take on Cedar Grove in a SEC battle.

St. Thomas Aquinas was removed from the unbeaten team list tonight as Old Bridge powered past them in straight sets. Malvina Sullivan had 8 kills and Leena Tran added 5 kills as well as 4 aces. Nice effort by Janna Adams as she posted 9 digs, 16 assists, and 2 aces.

Big Skyland matchup today as Bridgewater Raritan traveled to Hillsborough to take on the Raiders. The Panthers edged the Raiders in three sets but there was inspired performances on both sides of the net. For the Panthers, Kate Rutigliano had 12 kills and 2 blocks and Nikki Blair posted 23 assists, 2 kills, a block and 2 aces. BR had 51 digs in the match with 11 coming from Rutigliano and Gina Festa and 10 posted from Rachel Hatto. The Raiders received 12 kills and 9 digs from Aileen Xue, 21 assists and 4 digs from Gisele Galera, 13 digs from Gianna LaVecchia, and 5 kills and 8 digs from Josie Marcinek.