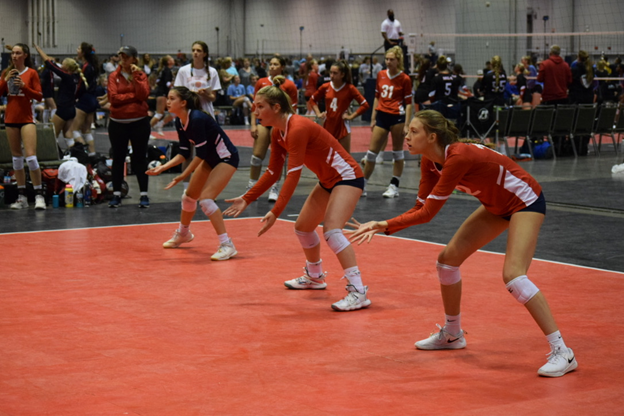 Deanna Whelpley is one of those hidden gems. As a volleyball player, she brings a powerful front line attack to a stacked IHA offense. As a leader, she brings work ethic and the example to follow as the hardest working player on the floor. And as a person, she is the ultimate teammate, commuting to school and club volleyball to her private school from an hour away each day. All of these components will contribute to another year of standout success for the Blue Eagles.

IHA is off to another great start this Fall. They represent the penultimate girl’s volleyball program in New Jersey and are coached by the Queen of NJ volleyball Maria Nolan. Maria has registered over 1,000 wins and is the winningest Coach in NJ Girl’s Volleyball history. She attracts the best players and Deanna is a great example as she commutes from Congers, NY to play for Coach. Whelpley has also been well groomed at DIGS, the club team that feeds some of the best NJ high school programs in North Jersey, including IHA.

Deanna is a complete player. She is smart and has an extremely high VBIQ. She anticipates opponents attacks on both the block and defensively in the back row. She can hit with power and has the size and technique to form the knockout punch up front. She is equally adept at back row hits for kills. She is also a superlative passer on serve receive and represents such a strong foundation and versatility for any team she plays for, whether high school or club.

On a team that already has Brookelyn Talmadge up front, as well as Grace Coughlin and Erin Burke at the pins, Whelpley is another big contributors in a team of stars. Deanna is a perfect compliment of senior leadership to help mentor and lead by example for an IHA team that is made up of half underclassman.

Deanna has already made her college choice and we look forward to watching her career unfold as a senior as well over the next four years at Scranton University.

Here is our interview with Ms. Whelpley…

Hi Deanna. Thanks for joining the NJP player interview club. Tell us a bit about yourself? (What school do you attend, what town do you live? What year are you graduating? Tell us about your family? etc.)

Hi, I am Deanna Whelpley. I am class of 2022 and  from Congers, New York. I originally attended Albertus Magnus High School and then transferred to Immaculate Heart Academy my sophomore year. I have two older brothers that both attended Don Bosco Prep and both played sports in college. Johnny, the oldest, played football at FDU Madison and my other brother Ryan played Lacrosse at Wagner and is now playing Lacrosse at the University of Arizona.

I have been playing volleyball since 7th grade. I have always played basketball and have always been taller than most people in my grade. So my dad thought volleyball would be a good fit, so I tried out and made the team.

I am 5’11 ( 6 foot in volleyball shoes). I am an outside/opposite but did play middle my freshman year. My favorite position to play is definitely outside hitter.

Tell us about your IHA teammates. Who do you expect to be this year’s up and coming and standout players in the Fall?

Definitely sophomore Abby Romero. Over the summer, Abby was able to play with my club team at AAUS Nationals as DS. She kept up with the 17 year old players while she was only 15. This year, she is stepping into a huge role of libero and has been doing a great job. She is 100% a person to look at this year and the years coming years.

You made solid contributions for IHA at outside hitter during the Spring season with 31 kills and 2 blocks. What are your goals for your senior year as you enter your 3rd varsity season?

My most important goal is to keep the legacy alive. With three seniors that have impacted our team so much over the years leaving, it will be hard filling in their place. Also, because we weren’t able to our normal state tournament last year, it brings us even more determination to win the state tournament this season. Another goal of mine is to definitely bring over what I have been learning at club into IHA volleyball. I just need to play my game, find the open shots, and know when to slam the ball. Another goal is to leave this team in good hands. With having such a young team now, we are making sure the juniors step up and help make the younger girls feel welcome, as well as help them mature physically and mentally.

I am planning to play in college and have verbally committed to the University of Scranton. I am most likely going in as undecided but am thinking of majoring in business.

The Blue Eagles completed another amazing season winning their 14 straight sectional title and again being NJP’s #1 ranked team. Will the streak stay alive in Fall 2021?

We have a team with mostly freshmen and sophomores, and lost great leaders from last year like Gianna Grigaliunas and Alyssa Lowther. Everyone on this team has sacrificed a lot since the beginning of the summer. We are never satisfied with a win. We still come into practice working hard and getting better.

My brothers have both been huge inspirations to me these past couple of years. They have taught me what hard work looks like and what it takes to be a college athlete. They also have helped me tremendously in the college process and helped me choose Scranton. They have been great role models and taught me to always be the hardest worker in the gym.

What is your favorite food to eat the night before or day of a big game?

Chicken parm! Before big games, I always order chicken parm from Blu Fig ( a restaurant from my area ). I swear it always makes me do good the next day.

I always try to just focus on what I’m doing good, and how to help my team, instead of focusing on myself. For example, one day my serve receive was awful, but my defense and hitting made up for it. If I prioritize what I “can” do for my team, instead of focusing on what I’m not doing well in, everything will be fine especially when serving in front of a huge crowd or for the game point. I always say to myself “I do that all the time” reminding myself I make serves all the time in practices and in games, and it helps me gain confidence.

I 100% believe attitude is a huge factor in winning. At IHA, I learned that you can never underestimate a team. With being number 1, that makes every team want to beat you and every team will play their best game against you. We all learned that we must take the court with high confidence and start out strong to show other teams why we are number 1.

Tell us about your club experience at Digs…

I tried out my 14’s years and surprisingly made the red team. I started out as a setter and was moved to the  middle. When coming to IHA, I was moved to outside and then played outside my following club season. DIGS has helped me not just become a great volleyball player, but also a great person in general. DIGS has helped me mature in the game physically and mentally. DIGS also helped me transition to IHA a lot better because many of the older girls played at DIGS on the older teams. I will always be grateful for the coaching and friendships that have came from DIGS. Even though DIGS is a 45 minute drive to practice, I am willing to do that because of how great the coaching and people are there.

It definitely taught me better time management and helps me priority what’s important to me.