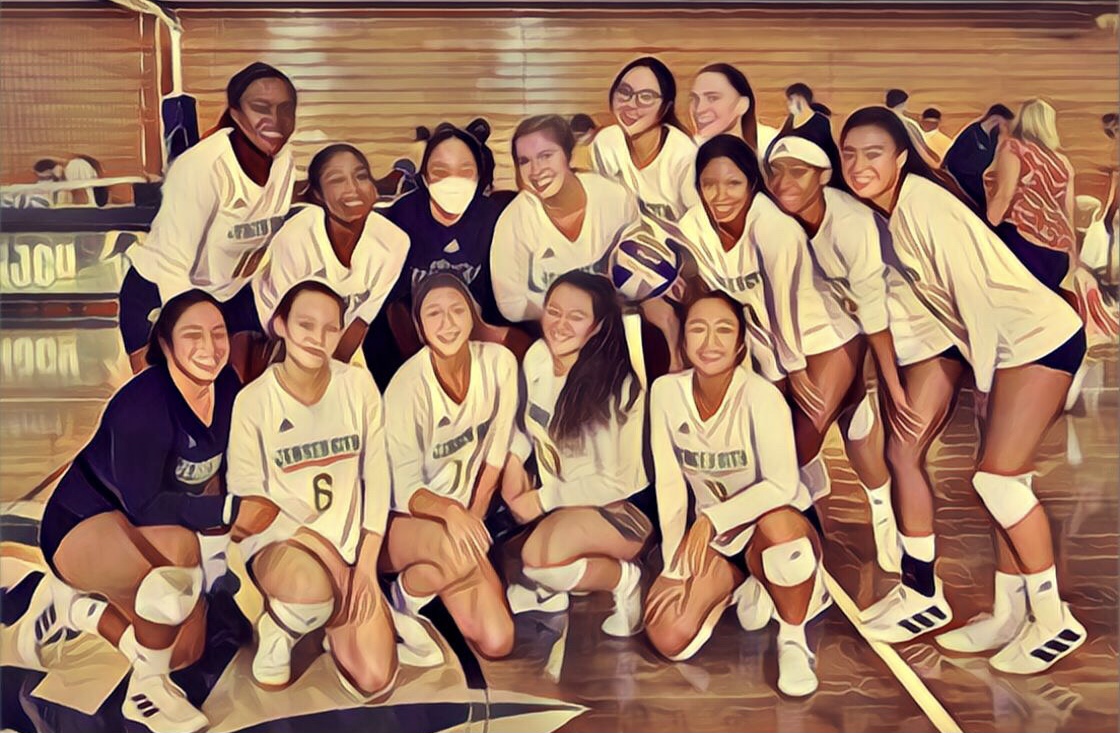 Bogota was home for Park Ridge in a NJIC matchup of top teams. The Buccaneer duo of hitter Ashanna Caviness and setter Mia Pimental were clicking today as Mia served up 16 of Ashanna’s kills. Caviness has been world class on the attack and now has 84 kills in 7 matches. Bogota came away with a straight set win.

North Hunterdon is now 10-0 after taking care of business against the improved Watchung Hills Warriors. Emily Wolters evenly spread out her assists in a sound game plan that produced a lopsided win. & players had multiple kills including 5 from Tori Kuo and 4 from Colleen Russell. Emily had 4 kills of her own in addition to 12 service points, a block, and 4 digs. NH continues to stake their claim as the top high school team in NJ.

East Brunswick remained unbeaten at 5-0 with a conquest over GMC league rival Piscataway. Paige Anania had 7 kills and Hailey Benesz added 6. The Bears will host the Raiders of Hillsborough this Saturday.

Ridge is now 7-1 after squeaking out a tight two set victory over Hunterdon Central. Brianna Taylor had 22 digs and Amanda Shirk had 13 as Central tried to fend off the Ridge attack. But Chelsea Tancredi bashed 7 kills and Taylor McLachlan had 4 kills and 2 blocks to lead Ridge to the league win.

St. John Vianney improved to 9-2 as they ran past Manasquan in a Shore matchup. Big game from Mackenzie Bloss as she posted 12 assists, 5 aces, and 2 kills. Erin Gretzky had 6 kills and Kennedy Mayo added 4.

Skylar Hendrick, now 7th in the state in overall kills, had 10 kills, 2 blocks, and 5 aces in another grand performance as WWPS defeated Hopewell Valley in straight sets. A big night for Danielle O’Shea who turned back 5 blocks in the match while adding 2 kills.

St. Thomas Aquinas is now 9-1 as the Trojans edged Monroe in a nail biter. A 25-23 third set was the decider. Olivia Alicante had a monster game with 15 kills, 2 blocks, 8 digs and an ace as the sophomore led the STA to another big win. Monroe hung tough but dropped to 4-2.

Sara Villamil was outstanding today as Princeton knocked off the rising Notre Dame Irish in a clash of BCSL rivals. Sarah had 9 kills and 4 aces and made the difference for the Tigers.

Fun night in Old Bridge as the Knights celebrated senior night against South Brunswick. Malvina Sullivan and Leena Tran had ten kills each and Julia Mikucki had 24 assists leading the Knights to a straight set win. South Brunswick had a strong attack tonight but Old Bridge lifted 53 digs for the match solidifying the win over the Vikings.

Sophomore Angelique Ong of Elmwood Park caught fire tonight. Ong pounded 14 aces and10 kills, while adding 8 digs in a NJIC win over Manchester Regional. Ong is a player to watch as the season continues. Her last few games have been off the chart!

Toms River South is so much better than their record indicates. They have hung tough with TRE, Donovan Catholic, TRN, and Brick Memorial while beating Southern and now Barnegat tonight. It was the fifth 3 set match of their season. South A remains wide open despite TRE’s 5-0 start. Lot’s of talented teams in South A!

We did a stat deep dive tonight and many recent streaks have raised some of the girl’s to the top of the state. Check out all the category leaders on overall statistics at https://njpowerranking.com/2021/09/24/nj-hs-stat-leaders-through-games-of-9-23/

Congrats to Alexis Caltabiano of Gloucester Tech for taking the lead in kills overall in the state with 99. Leah Mackey from Morris Knolls is right behind her. Noting standout performances by sophomore Olivia Alicante of STA who is leading all sophomores by thirty-two after logging 85 thus far this season. Ashanna Caviness of Bogota leads all juniors with 84.

Sophia DiProfio of Johnson holds a one block lead over Bridget Lonergan of MSDA. Sophia has 28 blocks and Bridget has 27.

Abigail Adams of Morris Tech leads the state with 149 digs thus far for the season. Junior Gena Driscoll of Gloucester Catholic has 138.

Junior Joanna Andrews of Williamstown has 176 assists to lead all players in NJ in the category. St. John Vianney’s Mackenzie Bloss is second with 173.

And one of the most impressive category leaders is Liahnna Orange who has already slammed 50 aces in the first three weeks of the season. Mirka Cordova of Plainfield has 46 and is on second place but these two are heads above the rest of the players in NJ.

Congrats to Rutgers-Newark for taking down previously unbeaten NJCU tonight in Jersey City. The Scarlet Raiders looked super motivated for the game as they won in 4 sets.