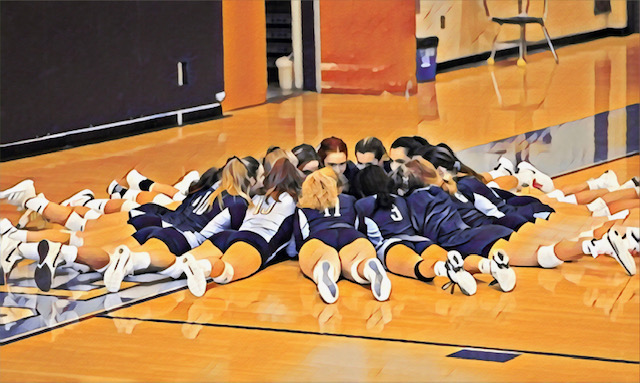 It was a wild Saturday in the NJ high school volleyball season. Today was filled with tournament games, Tri-matches, and a few surprises for sure…

Let’s get right into some of today’s stuff…

What a nice weekend for the Old Bridge Knights. They picked up three wins today beating Eastern, Brick Memorial, and People’s Prep. They improved to 15-6 and have won 5 in a row. They have some signature wins this season taking down Monroe, Washington Township, and now Brick Memorial today. They are a team to watch for the state playoffs and GMC playoffs. Leena Tran has been so impressive this season and is nearing the 150 kills mark for the Fall as well as 150 digs.

Williamstown took home two wins today and disposed of Monroe and WWPS, both in straight sets.

Jen Howarth had 6 kills and Emily Pogorelec had 5 along with 10 digs. Isabelle Borowinski tallied 3 blocks and 3 kills for the champs. Congrats to the Indian players and coaches. They are now 19-2.

They took their semi-final against Delaware Valley in straight sets and then disposed of NJAC power Sparta in straight sets. The Lions improved to 20-1 and are a clear power in Central Jersey. Tori Kuo and Emily Wolters had their usual outstanding performances. Sparta had gotten past Hunterdon Central in the semi earlier in the day.

The Bergen County tournament was cancelled today due to a player injury that was sustained at the beginning of game 1. The player was taken out by ambulance with a severe head injury and the remaining quarter-final games were cancelled and rescheduled for next Friday. The player suffered a concussion but has no further complications and is expected to be released from the hospital tomorrow. Which is great news. We wish her a speedy recovery.

In the Morris County tournament quarter-finals:

Mendham continued it’s hot streak, this time beating Montville in straight sets. Ania Trzesniowski had 9 kills and an ace while Poppy Skjonnamend had 8 kills. Annibelle Ernst had 6 kills and 2 blocks. Annibelle announced today she has committed to play volleyball at Haverford College in Delaware Valley, PA and Poppy also announced she would be playing at Kean University next fall. Congrats to both of these great players.

In the Essex County Tournament…

St. Elizabeth hung tough with Governor Livingston today and drove the match to three sets before the Highlanders came away with the victory. GL from the UCC is now 13-3. The NJAC’s St. Elizabeth is having their best season in over a decade but dropped to 9-7. The Panthers had won 18 games in the past decade and have put up half that total already this season. Junior Clare Farrell has been outstanding and sophomore Amanda Chambers just passed 300 career assists. The duo has been lethal this season.

Undefeated East Brunswick had one of their toughest tests of the season today against Southern. The Bears lost the first set 25-23 and it looked like Jordyn Hamlin, Hailey Krause, and Co might pull the upset. The next two sets were brilliantly close with EB surviving in the second by winning 27-25 and then held on to take set three 25-22. East Brunswick is now 15-0 and Southern dropped to 16-10.

Tomorrow, stay tuned for a new NJP Ranking and tons of other analysis on players and teams.

We may even have some new player interviews to post…