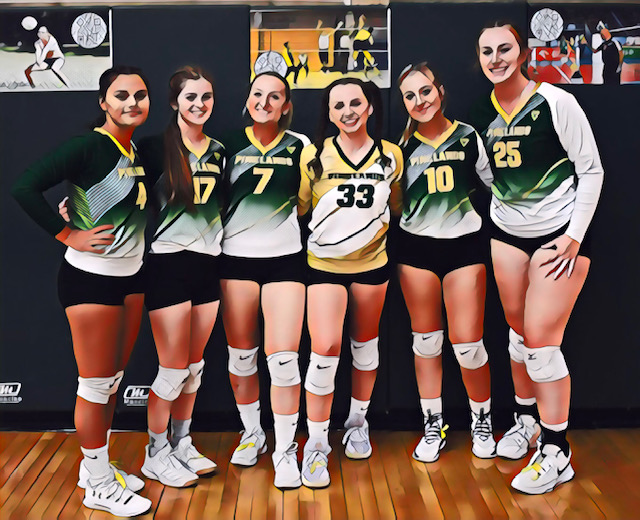 We usually think of Toms River having three big high school volleyball teams in NJ… East, North, and South. But the 4th is Donovan Catholic also based in Toms River. When any of these 4 teams get together to play each other, there is always fireworks. The Griffins came into their match vs Toms River East today at 16-2 after just losing a game to Jackson Liberty. The Raiders entered at 13-2 and riding a 5 game winning streak. TRE had a quick start and never looked back in the first set achieving a convincing 25-18 set win. Donovan battled back to take set two 25-19, setting up a nail biting and match deciding third set. It was a back and forth battle that went down to the final point as Toms River East outlasted Donovan 25-23. This time of year, thrilling games like this are common place as so many teams are fine tuned and firing on all cylinders. Meg Currie was outstanding as usual tonight for TRE. She posted 21 assists plus 2 kills. Rebecca Keith led the attack with 9 kills and Shannon Donaway added 7 while also popping in 4 aces. Dana Welch had 14 kills for the Griffins.

The Shore Tournament seeds were announced… here is a look at the grid:

Demarest remained unbeaten as they squeaked by Tenafly today in straight sets. Tenafly came close to taking the first set pushing the Norsemen to extra time 26-24. That was a first for Demarest this season who took control of set two and eased to a 25-16 win. Taylor Miller was the standout tonight on the attack with 5 kills and a block. 11 digs for Denise Pak and 15 assists for Liv Cammalleri. Demarest is now 16-0 and will face their nemesis Old Tappan tomorrow in the Big North quarter-final.

In other Big North action, Ramapo upset Northern Highlands today as Caroline Thoma had an outstanding performance. Thoma slapped 8 kills and an ace while also adding 2 blocks and 3 digs. The Raiders are showing some immense POtential as they head toward state playoffs. It was POetic justice after Northern Highlands took the first match earlier this season. It was a rowdy crowd at the game but the POlice were not needed. OK… that’s enough.

Wondering what the record for digs is for both teams in one game? We don’t know the answer but we bet tonight’s game between Bogota and West Morris Central was close. 146 digs over three sets. That’s a lot of shoveling. Angelina Mauro had 33 of them for WMC but it was not enough to stop the attack of Ashanna Caviness who smoked 20 kills and Gyanna Hernandez who ripped 14. Mia Pimentel had 40 assists for the Bucs, a personal best, which gave her 427 on the season and over 700 in the juniors career. Bogota improves to 18-1. Interesting crossover game for the algorithm when a NJAC team at 6-9 can take a set from the top NJIC team in the land. Bogota plays IHA tomorrow!

Nice conference crossover match between GMC standout JP Stevens (11-5) and Summit (12-5) from the UCC. Super close two set match but the GMC prevails as JP Stevens defeats Summit 25-23, 25-20. Let’s take a look at the upcoming GMC Tournament grid where the Hawks got the third seed…

Really surprised by the Princeton vs Montgomery match today. Princeton had an 8 game win streak and beat Notre Dame, WWPS, Florence, and Hopewell Valley during the stretch. Now they dropped their third game in a row to a Skyland team that was 1-13. We will see if the Tigers can get back on track soon. Congrats to the Cougars!

Washington Township seems to be back on its winning ways with a strong performance today, taking down Cherry Hill East in straight sets. Bryn Batista had 12 kills and Nina Cleary posted 15 assists.

We added a couple of new features to the site on Wednesday. The first is the “Accolades” page. We love to point out milestones to the NJ volleyball community. It might be an achievement like breaking a school or team record or possibly reaching 500 kills in your career, or 100 aces. It could be a Coach achieving their 300th win of their career or starting their 15th year of coaching. We are just starting to populate this page so stay tune and take notice of some great accomplishments by our high school varsity volleyball players. The “Accolades” page can be accessed directly on the main menu of the home page or at this link… https://njpowerranking.com/accolades-nj-girls-high-school/

We also added a new look on player stats. We have formulated a presentation of all active players career stats by each individual stat. We often lose sight of the accumulation of stats achieved by players over their entire high school career. We often try to present information in new ways that can provide insights into some of NJ’s best players over their careers. This was a post and can be seen at this link… https://njpowerranking.com/2021/10/14/career-stat-leaders-for-active-players/ We will be doing updates with new posts every couple of weeks until the season ends. Then these items will be incorporated into the actual menu pages under the girls high school menu so they can be archived for future reference.

We would love to engage several members of the NJP fan base to do some user testing for us. It’s an opportunity to give Ux feedback that can lead to site changes that can improve the site. If you have specific ideas or would like to participate, email us at njpowerranking@gmail.com.

Bogota at Immaculate Heart THE REMATCH