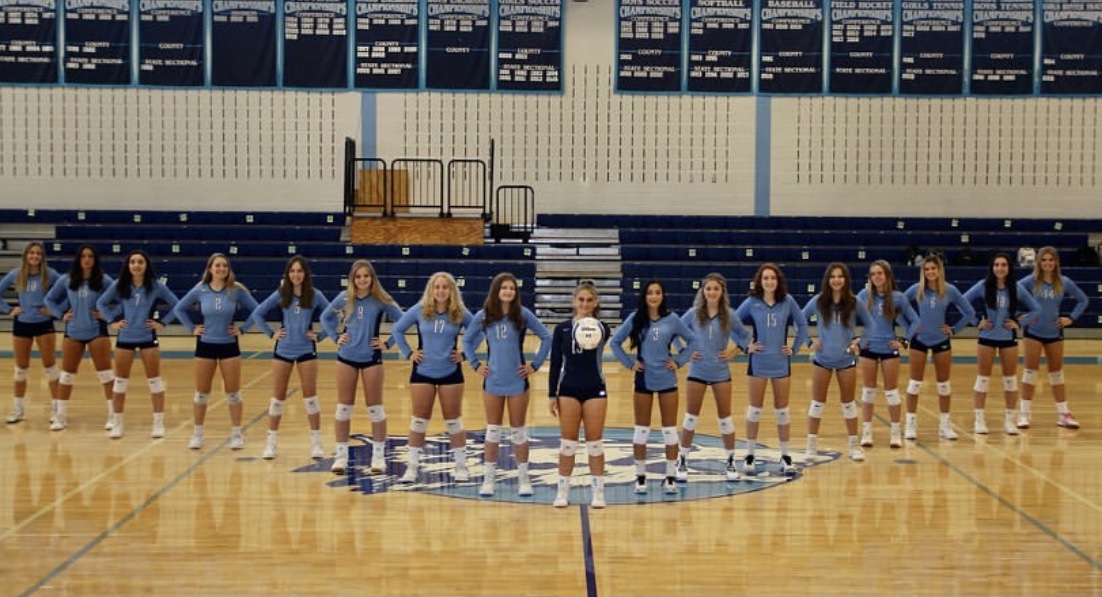 We have to start today with a huge milestone set from the Bogota Buccaneers. Saturday, The Bucs avenged an early season loss on opening day to unbeaten Immaculate Heart Academy, NJ’s #1 team. It was a three set thriller with Bogota prevailing to improve to 21-1 on the season and giving IHA their 3rd loss to a NJ team in the past 5 years. Ashanna Caviness carried the load for Bogota with 20 kills, 3 blocks, and 6 digs and Mia Pimental added 32 assists, 11 digs and 2 blocks. Both Gyanna Hernandez and Angelina Buhler added 6 kills for the Bucs. Brookelyn Talmadge had 14 kills and Deanna Whelpley added 13 while Kalena Stavish posted 40 assists for the Blue Eagles. IHA falls to 20-1. The NJP algorithm has not been too kind to Bogota this season as evidenced by their #18 rating in last Sunday’s updated ranking. Bogota proved us wrong and will be well situated for a quick move up the rankings with the monster win. We expect IHA to fall from #1 but their season portfolio is still one of the best in NJ so it may only be a rank or two drop. Demarest appears to be in the driver seat for this weeks top spot with Williamstown right behind.

Demarest will take on River Dell next in the Bergen County tournament after disposing of Old Tappan in straight sets and River Dell slipping past Pascack Valley in 3 sets. Senior Niki Woods stepped up Friday night with 11 kills and 2 blocks for the Norsemen while also having a block party with Gianna Galli slapping back 5 and 2 each from Metta Saban and Gretchen Haray. Denise Pak led the way on defense lifting 14 digs. River Dell dropped the first set to Pascack Valley but charged back with a very strong finish winning the last two sets 25-11, 25-19. Alicia Idiculla led the attack with 11 kills and three aces while Kayla DePol had 9 kills and 5 digs. Great game from Devan McHale who had 13 assists, 12 digs, and 6 kills. Erin McCabe had 3 kills and 3 blocks for the winners. NJP gives Demarest the slight edge in in Sunday’s semi-final. Bogota and Ridgewood are a toss-up in the other semi-final but one would feel that Bogota is feeling invincible after beating IHA.

Ridgewood blew past Northern Highlands handing them their 7th loss of the season on Friday. The Maroons improved to 18-2 and have been stellar on defense evidenced by the 50 digs posted in 2 sets. Their attack looks solid as well as they used 8 kills from Annabelle He and 7 from Ava Pascual as Cammi Quirk ran her usual well distributed offense. Sara Heuer had 3 blocks and 3 kills as well for the Maroons. The Ridgewood vs Bogota match-up on Sunday will be one you won’t want to miss.

The Gloucester County Tournament Championship was decided on Friday night with both semi’s and championship being played on the same night. Williamstown rolled past Kingsway in the first semi-final led by Melissa Anacious and her 8 kills as well as Julia Schwab’s 6 aces, and 3 kills. Washington Township surprised GCIT in straight sets with Bryn Batista having another spectacular showing. The semi winners then faced off in the Championship match but Washington Township could not keep up with the unbeaten Braves as the cruised to take the trophy, 25-16, 25-21. Dubtown is now 28-0 and own the best record in the Garden State. Dajah Williams was the star in this one with 10 kills while Julia Schwab added 6.

The Morris County Tournament is wining down with two semi-final matches later this afternoon. Roxbury, the #1 seed, will face red-hot Jefferson in the first match-up and West Morris Mendham will take on West Morris Central in the other. NJ favors a Roxbury vs Mendham final but anything can happen in these end of year match-ups. Jefferson just defeated Wayne Valley as peaking at the perfect time. Mendham dropped a close match to Hunterdon Central on Friday as they were done in by Amanda Shirk and friends for the Red Devils. Amanda scorched 14 kills and added 10 digs, 2 blocks, and an ace for HC in a stellar performance. WMC has proven they can play tough with any team in the state so this one will be the classic home town rivalry match.

At the Shore conference tournament, Donovan Catholic prevailed in a nail-biter against Brick Memorial. Macayla Lindner with 10 kills, 5 digs and 2 aces for the Griffins. Laine Kulpinski had 25 assists and now has 500 assists for her career and 428 on the season. 14 kills was not enough from all-world senior Kate Stoughton to advance in the tourney but Stoughton is up to 942 career kills as she enters her last state high school tournament of her career. Kate added 2 more aces and is now just 2 away from 250 for her career.

In the other shore quarter-finals, Pinelands played their hearts out but fell just short to Southern in a three set match. Hailey Krause and Samantha Hanneman controlled the attack for the Rams with Hailey posting 14 kills and Sam adding 9. Molly Ragulski had 28 assists for Southern. Olivia Benson had 8 kills for Pinelands and senior middle Jayne Wilkinson had 5 blocks and 7 kills for the Wildcats. Vianney handled Barnegat in straight sets powered by 10 kills from Erin Gretsky. The Lancers are now 19-2 on the year. Toms River East improved to 17-2 as they beat Colts Neck in three sets. The algorithm had the Cougars much higher in their rankings than their seed but TRE has been amazing this year and earned the 3 set win. 11 kills from Rebecca Keith and 10 from Shannon Dunaway powered the Raiders win. Donovan will now take on TRE in one semi and Southern will face Vianney in the second. The Championship will all be decided on Monday night with both semi’s and the tourney final being played at Georgian Court University.

Absegami beat Cedar Creek to advance to the finals of the Cape Atlantic tournament Championship. They will face Mainland who knocked off Pleasantville in the other semi-final. Mainland has only lost one game on the season and beat Absegami handily when they played earlier this season. Isabella Canesi is one of the best servers in the game and is still near the top of the individual ace rankings despite being shutdown for two weeks this season.

Morris Catholic beat Governor Livingston in another close three set match on Friday. Sofia Mattingly with a standout performance as she put up 13 assists and 13 kills in the Crusaders 6-2 scheme while Fiona North added 14 kills and 3 aces. Morris Catholic has really come on strong as of late after the Fiona to the lineup after her transfer wait period.

Kent Place prevailed in the Union County tournament Championship over Westfield on Friday. It was two close sets but Kent Place remained undefeated and continued to show their dominance in Union County. Iman Handy had 10 kills and 10 digs and Sabrina Skyers was her usual force in the middle with 4 blocks and 6 kills. Lauren Osuala added 7 kills.

The NJP Predictor is winding down with nightly updates and will switch to our “Bracketology” section for the remainder of the year when state playoffs commence. Our 86%+ winning percentage has been one of our best in a decade and we remain with a high confidence level that our statewide ranking system is the best in the business.

We will analyze the new state playoff grids after our ranking update tomorrow.

Hudson Catholic has won the Hudson County Tournament!!! They chalk about their third victory of Union City to take home the crown… again… New Head Coach Katria Stewart wins her first Hudson County Championship. The Hawks have not lost a game under her leadership. Union City has only lost to Hudson Catholic this season and has not lost a game otherwise.

Caldwell has defeated Livingston to win the Essex County Tournament. What a great achievement by the 12-11 team. Hats off to seniors Christine Infantalino, Ava Pannullo, Sarah Sherwood, Lulu Cecon and the rest of the squad.