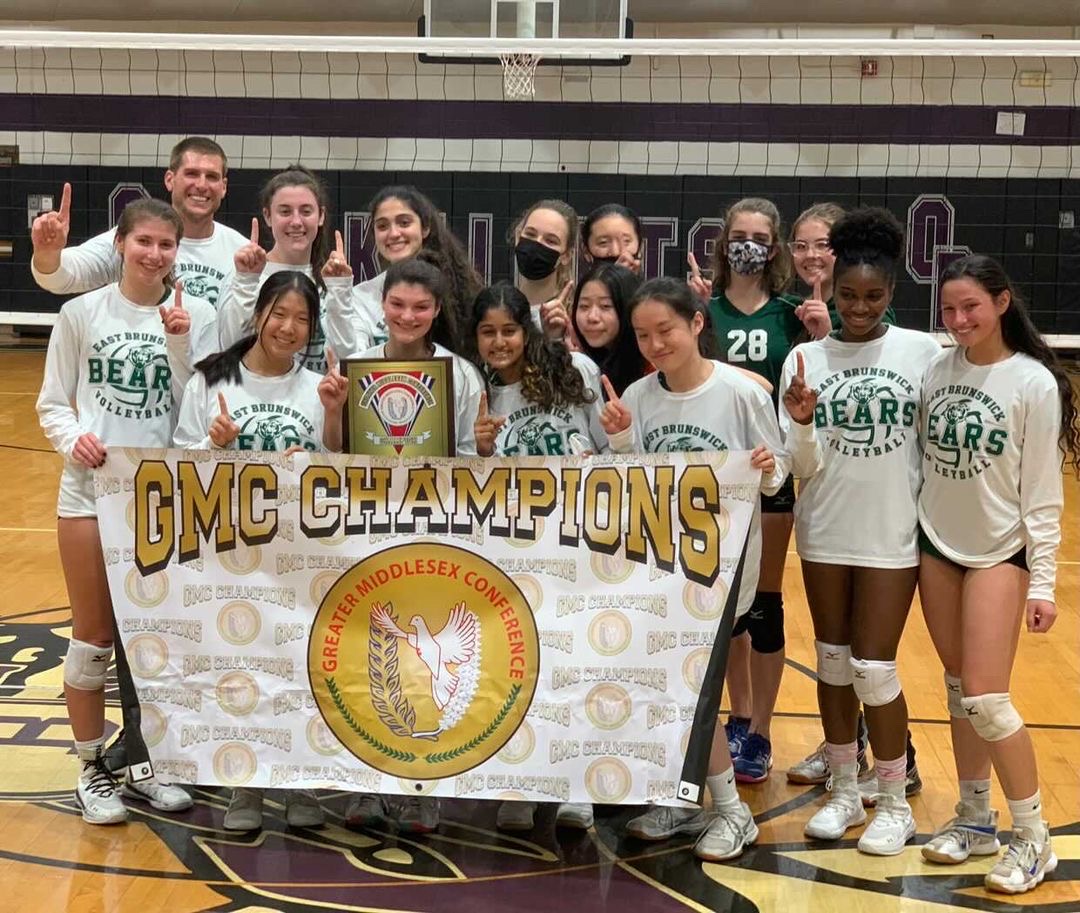 The East Brunswick Bears continued their assault on high school volleyball opponents this season as they won the GMC Tournament Championship over JP Stevens today in grand fashion. Like most of their matches this Fall, the score was not close as they clearly dominated the Hawks and took a straight set victory for the trophy.

Ysabella Sapienza had 16 assists and 3 aces as she orchestrated a perfect offensive attack with Paige Anania getting 7 kills and 2 aces and Kacey Trzaska and Hailey Benesz smashing 6 and 5 kills respectively. This has been the theme all season with a well rounded attack that is spread to both sides of the court and strong defensive play. Joyce Zhang lifted 8 digs in today’s match to lead the defensive charge.

We spoke with these three players tonight to get a flavor of their sentiment on the year and on the tournament. Hailey is one of the best beach volleyball players in New Jersey in her class year and she will be heading to Santa Clara University to play D1 beach VB next fall. She was brimming with excitement tonight after the big win. “I am really proud of how hard the team has been working to get to where we are today. This is the first time for a lot of us playing together and I can’t wait to see where things go from here”. There is still a lot of season left the Bears as they enter states with a #1 seed in the Central Group 4 grid.

Ysabella has quarterbacked the Bears at setter and has just been outstanding. She has notched 348 assists so far this season in addition to 43 aces, 18 kills, and 74 digs. She shared “The team and I have high expectations for this upcoming tourney. We believe we have the potential, the talent, and the mindset. We know there will be much more tough competitive so we plan on taking it game by game.” Bella is heading to Far Eastern University in the Philippines to play her college volleyball. She also shared a quote she is inspired by… “”No one will bring you down more than yourself, so stay confident and play your game”. It’s a great theme that has held true for the Bears this season.

Paige Anania, the brilliant outside hitter for EB also shared some thoughts. “I’m extremely proud on how our team played in the finals match against JP. We held our ground and played our game. I’m so thrilled to have received the title as GMC champs.” She also talked about the Bears future. “And I’m looking forward to playing the rest of the season with nothing less than high standards. We have the psychical capabilities and the mindset. I truly believe our team can do great things and our abilities can take us far. I’m excited to see what our future holds.”

We will see how far the Bears can go this season and whether a spot in the TOC is in their future. Congrats to the Bears players, coaches, and fans.