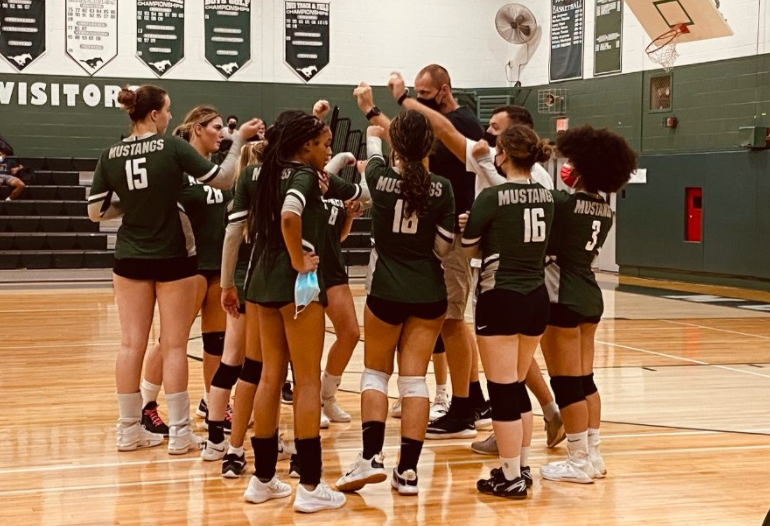 Like many basketball to volleyball converts, Sidney de Voogd is putting in her efforts and making her transition for the JFK Mustangs. The 6’4″ middle is still learning but has made a major impact for her team this Fall season. And at her pace of knowledge acquisition, she is destined to have a stellar senior campaign in 2022.

But first, she has been enjoying an incredibly successful Fall season. The Mustangs are 16-3 this season and played unbeaten East Brunswick very tough in the GMC tournament. They received the #1 seed in the Central Group 3 state playoff bracket

Sidney transitioned to full-time volleyball in her sophomore year and just keeps getting better and better. She posted some impact numbers as a sophomore, notably on the block side, as she put up the blockade 44 times while earning 54 kills in the same season. This year, she has doubled her kill total so far and is headed for 60+ blocks which will put her near the top of her class and in the top 1% of blockers in the state.

Sidney is one of a select few players in NJ that have a special relationship with their coach. Sidney’s Dad is her current high school volleyball head coach at JFK Iselin giving her the opportunity to live and breathe volleyball even during her downtime in a family that has a ton of experience with athletics and achievements. Her three sisters are all 6’2″ and have been outstanding basketball stars, some at the college level.

Her height makes her a top recruiting candidate for a D1 volleyball program in college, but she has the physicality and athleticism as well as solid academics that make her a complete package. Her decision to join CORE for club volleyball will produce immediate results and position her for continued growth in her senior year and beyond.

Here is our interview with Ms. de Voogd…

How are you, Sidney? Thanks for joining the NJP player interview club. Tell us a bit about yourself?

Hi! My name is Sidney de Voogd and I’m part of the 2023 class at John F. Kennedy Memorial high school in Iselin. I have three older sisters and live with my parents and two of my sisters. We are animal lovers for sure, with us are three dogs, four guinea pigs, a cockatiel, and a fish. Outside of sports I am a big true crime fan and love reading.

I’ve really only played since my freshman year, along with playing basketball for just about my whole life. Volleyball was really just another way to stay in shape in the off season, but I really started to enjoy it and kept going back to it. This past season with Covid is when I really took the jump to try and fully give volleyball a shot.

I am 6’4 with a 9’6 vertical. This year will be my first official year of club and I’ll be playing with Core Volleyball out of Hillsborough. For sure my favorite position is middle. There’s so many different hitting options and you just have to be everywhere at once. And when you finally get that block that just goes straight down is just the best feeling.

Tell us about your Mustangs teammates. Who do you expect to be this year’s standout players during this season?

Our team this year is quite the collection of characters. We all get along great which has really helped our play as a team so far. Our setter, Jessica Rohlfs (Senior), and I especially have really figured out a good system of communication and have been working really well together. Krishna Pathak (Sophomore), one of our right sides has also come through with some pretty big blocks, which is really great with her being so new to the sport.

NJP considers you as one of the top players in the state, especially for your class year. Do you plan on playing in college? If so, which ones are you looking at? What do you plan to study in college or what is your career path?

Ideally, I would like to play at a higher level like college ball. I haven’t really looked anywhere in particular yet, seeing as I’m still getting a lay of the land in this sport. Education wise I’m interested in international business/ marketing, but I’m still open to other options.

You finished 7th overall in the state in blocks during the Spring season, 4 in returning players. What are your goals for these remaining two years at JFK?

I definitely have a lot of hopes for my remaining two years at JFK. There’s a ton of room for improvement in my play both blocking and hitting wise that I’m really trying to work on. Also stepping up more as a leader on and off the court is something I feel like I have gotten better at and I hope to continue to improve on.

Tell us about your team’s head coach? 🙂

Funnily enough, my head coach, Sebastiaan de Voogd, is also my dad! This has not been the first time he’s been my coach, but this is most definitely the most challenging. He’s constantly pushing me to be the best I can which I am incredibly grateful for regardless of it gets a bit too much at times. At the end of the day, he just wants what’s best for me and I wouldn’t have it any other way. Aside from all that, as an overall coach, he really has built something among the team. He’s constantly pushing all of us to be the best and he balances messing around with us, but also getting down to business really well. When we step on the court it’s game time, no matter what was happening before.

My parents and my sisters are big motivators for me.  Even through making the move to try club volleyball, my parents have supported me with every decision. They just want me to be passionate in what I do, either that be sports or academics, and even beyond school. My sisters too are constantly giving me different advice from what they’ve gone through.

Which team is the toughest competitor you have played against this year?

I would say the toughest game we’ve had this year would either be Woodbridge or Colonia. The reason being more so than anything is that they were both just tough mental games. Woodbridge and Colonia are both cross town rivals so both crowds were big, lots of students and parents from both sides so the energy was high, and it was both a blessing and a curse. Those games especially, the second you got in your own head it affected the whole energy of the team and now the other team got the momentum. Luckily the second time we played both Woodbridge and Colonia we had a much better grasp on the mental aspect of the game and really pulled through on both occasions.

100% attitude is a winning factor. Especially in a team sport such as volleyball, your attitude not only affects you, but it affects your teammates around you.