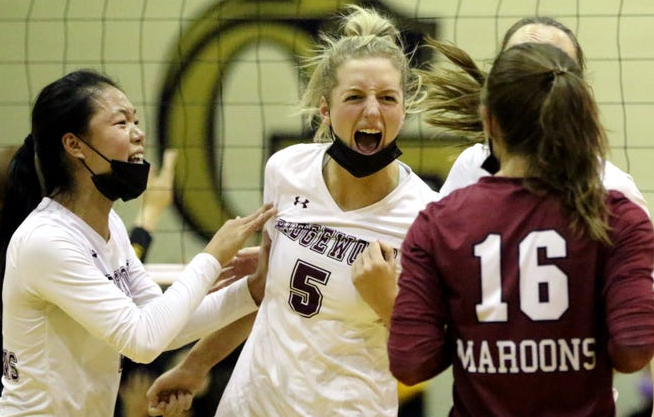 OK, who is dressing up like a volleyball player for Halloween on Sunday?

Tonight was a huge night in the NJ volleyball community as the girl’s high school volleyball state tournament got under way with first round matches. Our “Bracketology” page has all the updates from tonight’s first matches. You can access it here at https://njpowerranking.com/njp-spring-girls-bracketology/

Quite a few upsets on the grid tonight (as always) as cross conference match-ups often reveal unanticipated divisional strength. A couple of 12 seeds took out #5 seeds as well as a bundle of 9 seeds beating 8’s. I think the biggest surprise was Vernon taking out Ramsey and ending the Bergen County perennial powers season. We just didn’t see that coming. NJP went 20-5 on the bracket tonight. If you picked the highest seed in games tonight, your record would have been 14-11. So we felt pretty good after Day 1.

Our Accolades page keeps filling up with more than a few per day so check them out and see the great accomplishments of our girl’s high school players at https://njpowerranking.com/accolades-nj-girls-high-school/

In other games tonight, outside of the state tourney, Pinelands beat Brick Memorial in straight sets. Jayne Wilkinson with any great performance with 6 kills and 2 blocks. 4 aces by Samantha Poling led a 10 ace contribution from the team. Memorial only put up 11 in the first set so Pinelands must have been humming.

Hoboken was able to stay pretty close to Union City tonight, despite losing in straight sets. The second set went 25-20. Mathilde Karskens was on fire tonight smoking 11 kills for the Soaring Eagles.

A nice all-around effort by Ryan Gorski tonight as she popped in 7 kills and also lifted 7 digs as Union Catholic beat MSDA. Gabby Colon with 7 aces for the winners.

Mendham just buried Pope John today, limiting them to just 14 points for the match. The Minutemaids are flying high entering states and the sky is the limit for this group. Anni Ernst had 5 kills and Sarah Wilcock had 5 aces for Mendham.

Piscataway really surprised Iselin Kennedy today. The Mustangs blew out the Chiefs in the first set 25-9 but Piscataway stayed scrappy and never gave up as they slimly won the next 2 sets to secure the victory. Kennedy won the point total for the match 69-58 but lost 2 of the three sets. Vanessa Freeman was the star for the Chiefs posting 11 kills and 12 digs. Sideny de Voogd was stellar for the Mustangs with 9 kills and 5 blocks but it was not enough today. Sarah Budzaku had 5 kills and 4 blocks for the Mustangs as well.

Madison, Point Pleasant, Jackson Liberty and Barnegat all lost today before they head into tournament play. Wouldn’t put to much emphasis into those losses as the games are not that important other than momentum build…