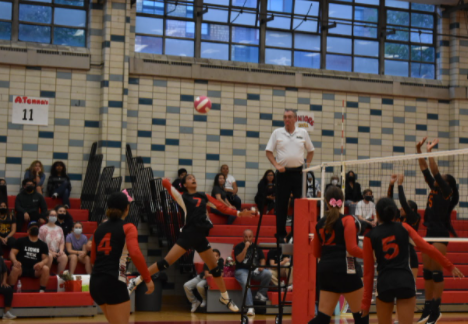 In the pre-COVID 2019-2020 NJ high school volleyball season, the Hoboken Redwings completed their season with a record of 1-16. This past Spring season, The Redwings went 0-4. But this year, there was much more optimism as the season approached, as the team welcomed twin sisters Morgan and Madison Walia-Peter’s to their school as freshman. Both girls had been playing club volleyball for three full seasons already, and will be playing for Brooklyn Elite Volleyball club in the coming season. To get two club players of the girls caliber as new recruits appeared to be just what the doctor had ordered.

Both girls were impact players at the varsity level for Hoboken this Fall. The Redwings started the season 4-0, and they were already ahead of the last two-year win count by three games. The influx of talent took the pressure off of seniors Sophia Ayala and Emily Jacobelli and it also fueled the fire for other young players to rise up like sophomore Kayla Zegarra and freshman Stella Jacey. Madison took over the setter role and Morgan slotted in at outside. It was a perfect storm that has made the Redwings fly high this season.

Tomorrow night, Hoboken will face Dayton for the Central Group 1 Sectional Championship on their home floor at Hoboken High School. It has the feel of a movie script rather than a volleyball match, but it is a huge credit to this teams passion toward turning the program around, from the coaches, to the players, and to the fans.

Both sisters have had breakout years. Morgan has 70 kills, 141 digs, and has smashed 48 aces for the Redwings. Madison has controlled the team’s tempo at setter providing a team leading 213 assists and 54 aces which is also tops on the team. She has contributed 125 digs and 24 kills as well. Second year player Keyla Zegarra has 70 kills and 155 digs and has 33 aces to her credit. Freshman Stella Jacey has 121 digs and 10 aces. This young core has meshed so well with the seniors and juniors on the team, and the results have been astonishing.

This is one of NJ volleyball’s best stories this season and it comes at a time when need to hear more stories of positivity and underdogs rising to the top. We have asked both girls to share their thoughts in this one interview in a special edition of the NJP Player Interview Club…

Here is our interview(s) with Morgan and Madison Walia-Peters…

How are you, Morgan and Madison? Thanks for joining the NJP player interview club. Tell us a bit about yourself?

Firstly, thank you for speaking to us. We live in Hoboken which is across the Hudson River from New York City, so we are lucky to be able to enjoy a lot of what the city has to offer. We are freshmen at Hoboken High School, and will be graduating in 2025.

How long have you played volleyball and what inspired you to take up volleyball initially? What are your metrics/details? Height, vertical, position, club team, etc. What is your favorite position to play?

We started playing volleyball when we were 10 years old, and we were encouraged by our Krav Maga teacher, Traci Edwards, who also runs a girls volleyball program for beginners in NYC. A year later we started playing club, and will be playing for Brooklyn Elite(“BEV”) 14s this season. Madison will be either a DS or setter this club season, and Morgan will continue as an outside. We are relatively new to our positions, and are excited to continue developing our skills over coming years.

Tell us about your Redwings teammates. Who else has been this year’s standout players during this season?

We have an awesome team!! We have seen each and every one of our teammates improve individually as well as excel as a team. Everyone on our team has been instrumental in getting us to the Sectional Finals, whether it was their defensive digs, amazing aces, or knockout kills. Our turnaround has raised the visibility of the Redwings Volleyball team in our community, whose support has helped us thrive.

NJP considers you both as top players in the state, especially for your class year. Do you plan on playing in college? If so, which ones are you looking at? What do you plan to study in college or what is your career path?

We are both hoping to play for a top academic D1 university and are planning on pursuing different careers. Morgan aspires to study medicine and Madison strives to study law. In the meantime, we are focusing on our academics so that we have an opportunity at these schools.

Hoboken has been an amazing turnaround team after no wins this spring season and just one win in the 2019-20 full season to playing for the Sectional Group 1 championship this Fall… what new spirit does the team have this season that has launched their success?

Our team motto is “Better than Yesterday!” which embodies our determination to constantly improve. This has helped us as a team to bring our best to every game, and continue to adapt from our mistakes.

Tell us about the dynamic of twin sisters playing together as teammates?

Our secret weapon is “twin telepathy”. Just kidding! In all seriousness, because we have played together for many years, we have built a sense of trust and better communication. We constantly provide each other feedback and help with certain techniques. For example, Madison is now helping Morgan with diving techniques and Morgan has helped Madison with float serves.

Tell us about your team’s coaches, Morgan?

Both our head coach (Coach Fernandes) and assistant coach (Coach Faura) have put in so much time and effort developing the team spirit. For instance, just before our semifinals game against McNair, they pumped up the team with a motivational video. They also focused on strategy by analysing both our own and our opponent’s game footage with us. This helps us individually learn how to better read our opposing teams on court, as well as fixing our own weaknesses during a game.

Madison…Tell us about your experience at Brooklyn Elite (“BEV”)?

BEV has had a tremendous impact on me as an athlete and a person. BEV’s training focuses on technical skills and ensures that every player reaches their full potential. They have a history of taking teams to the Nationals (and winning!). In the time that I have been part of the team, I have seen a drastic improvement in not only my volleyball skills but also my ability to work well in a team. A huge shoutout to Coach Otto and Coach Tommy who have pushed me to become a better person both on and off the court.

Morgan, What are your other hobbies or interests?

During the covid lockdown, my hobbies helped me stay strong. As a creative person, I have always enjoyed different forms of art. Teaching myself how to play the guitar helped me relax and try music that I ordinarily would not have encountered. I like to take abstract photos of everyday things, and ask my family to guess what they are. My sister and I are also part of our school’s Debate Team and Math Club. On weekends, I sometimes play tennis and basketball with my friends and family.

What else would you like us to know about you, Madison?

Our family is very important to my sister and I. Most of our family is overseas, so I use technology to keep in touch. I enjoy playing poker with my grandparents using WhatsApp (no real money involved, of course!). During the holidays, we travel to Australia or Malaysia to spend time with our broader families. My favorite part is eating authentic food from hole-in-the-wall restaurants in Kuala Lumpur and going to the beach with my cousins in Sydney.