Which Team Do NJ High School Volleyball Players Think Will Win The TOC? 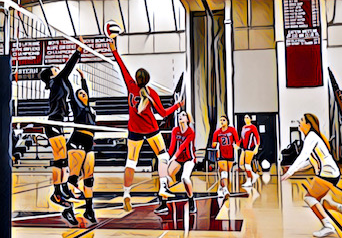 Who might be the best to know which team may be the Tournament of Champions winner? Players of course!

We have reached out to a wide variety of some of NJ’s best to get their opinions. And are sharing them in this post.

Want to weigh in? Choose your winner in the survey below…

“I think that Paul VI and Williamstown will go very far in TOC and both have a good chance at winning the entire tournament. They are both powerful teams filled with a lot of talent that can be seen when watching or playing them!” Bryn Bautista (Washington Township)

“I think Bogota and Paul VI have big chances of winning TOC. I have played with and against players from both team and I think they have a very strong chance to win.” Olivia Alicante (St. Thomas Aquinas)

“Based on their impressive undefeated record and the sheer fact that they’ve played 35 games this season, I think Williamstown will win the TOC.” Sidney de Voogd (JFK Iselin)

“I believe Williamstown will win the TOC, they’ve been undefeated all season with a 35-0 record with only going to a 3rd set 4 times this season, they have strong players and it’ll help them win the TOC. All the teams in the TOC deserve to be in it, good luck to them all, and I can’t wait to see how it goes!” Meg Currie (Toms River East)

“I think Bogota is going to win because they have a very strong lineup and their outside, Ashanna, is unstoppable!” Mariella Hilyard (Mount Saint Mary)

“I think that Williamstown will win the TOC based on their perfect record and their strong abilities on the court.” Kate Louer (Clifton)

“I think Mendham has a very good chance of winning it all. They are a strong team in the front and back row and can put the ball away.” Brooke Gyory (Governor Livingston)

“I have had the privilege to play alongside a lot of girls that are competing in this years TOC, all of these teams have so much to offer and are a pleasure to watch.” Katie Brokes (Governor Livingston)

“I think that Williamstown will end up winning because from what I’ve seen they cover the court very well and they are very consistent with their hitting. Overall, an amazing well-rounded team.” Hailey Benesz (East Brunswick)

“I think Williamstown will probably win TOC, they have a strong offense and just an overall well-rounded team!” Taylor Grady (Pascack Valley)

“Although all teams participating in the TOC have a great chance of winning, I think that Bogota will take this years title because they never fail to push to the end, and they have improved a lot since the beginning of this season.” Kailey Levinson (Park Ridge)

“I think Williamstown is going to win the TOC not only are they seed 1 with their 35-0 season they seem to have amazing chemistry and play insanely well. Nobody is stopping them.” Mia Bonilla (Elizabeth)

“I think Paul VI will win. I’ve had the privilege to play them and they are such a solid team, amazing dynamics and abilities.” Skylar Hendrick (WWPS)

“I think Williamstown is going to win because they are a great team that went undefeated all year. I also play with some of the girls on the team and they are great players and people!” Wyette Schubert-Brown (Seneca)

“As a player who has competed with Williamstown and know how tough they are to beat, I feel they will win the TOC going into it with an undefeated record and amazing talent. ” Nina Cleary (Washington Township)

“I think North Hunterdon has a chance at winning the TOC because when I played them in the Group Semifinals I could see that they are a really rounded out team. NH is a very dynamic team that may not have the strongest hitters but they are the smartest.” Lorie Horta (Roxbury)

“I am rooting for Non-Public Group A, so let’s go, Paul VI!!” Iman Skye (Kent Place)

“I think that Willamstown is going to win the TOC because they are just so put together and can attack from anywhere on the court.” Cammi Quirk (Ridgewood)

“I think Williamstown will win it all this year, they are a very talented team and they deserve it.” Hailea Krause (Southern)

“I think Williamstown will keep pushing its dominant offense and undefeated momentum throughout the TOC and take it all.” Mary Huegel (Colts Neck)

“I think North Hunterdon has a good chance at winning it this year because of they’re strong offense and solid defense.” Drew Leonardis (Hudson Catholic)

“Honestly, I think Williamstown has a great chance of winning the TOC this year, they’re just a really amazing and cohesive team.” Ash Kingsley (Fair Lawn)

“I think it is going to be Williamstown because Dajah Williams is lights out on the outside and Jasmine Rolle is a huge force on the net blocking and hitting wise!” Kennedy Mayo (St. John Vianney)

“Well… since we got beat by Williamstown, that’s who I’m rooting for. It’s better to know we lost to a team that won the whole thing then by a team who would get wiped out in the first round. They truly have a great team and a program that every high school should be jealous of.” Paige Anania (East Brunswick)

“I think Williamstown will win because of their 35-0 season and strong team all around, there is no stopping them.” Jayne Wilkinson (Pinelands)

“I think Williamstown would win the TOC because they were our toughest competition and they work really well together.❤️” Kyla Sayson (GCIT)

“I think Williamstown will win the TOC because of not only their undefeated record, but their passion to have it remain that way.” Jocelyn Rodriguez (Rutherford)

“I believe Paul VI will win the TOC. They had such a successful season along with a talented group of players working hard all season long.” Liahanna Orange (Mother Seton)

“I think Paul VI has the best shot at winning the TOC because of the level of competition they’ve faced and how successful their season has been this year!” Bridget Lonergan (MSDA)

“Williamstown has a good chance of winning because they are consistently powerful at every position on the court.” Annabelle He (Ridgewood)

“I think Williamstown is going to win the TOC based on their perfect record and continuously keeping the momentum on their side. Overall, they are a well rounded team and play their hardest every game.” Jenna Czajkowski (Central Regional)

“I think Paul VI will win because of the team chemistry! They are an extremely talented team but the relationship between the girls is incredible and allows them to do as well as they do !!” Mia Moscicki (Shawnee)

“I think that Williamstown is going to finish the season undefeated!” Emily Carcich (Jefferson)

I think Williamstown will win the TOC, not only because of their seed and record but they also seem to have great communication, a well rounded team and a strong lineup behind them.” Jordan Motyka (Toms River South)