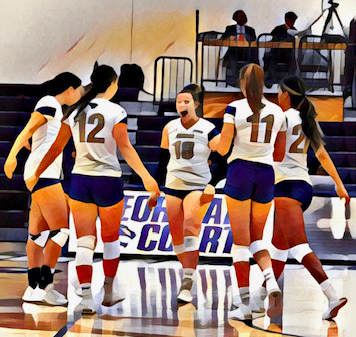 The Final 4 is set for the NJ Girls high school volleyball TOC tournament!!

Tonight, Mendham and Paul VI solidified their spots in the quad. Williamstown and North Hunterdon were waiting to see who their opponents would be. But Saturday, its “game on” with the semi-finals, and the two winners facing each other Sunday for the NJ State Championship.

Mendham had a solid game plan. They limited the states leading attacker Ashanna Caviness to just 10 kills, her lowest total since October 7th. Chloe Czop was outstanding on defense as was Ania Trzesniowski. Chloe lifted 13 digs in the match with Ania returning 9. What an amazing performance by senior Gabby David as she has the best game of her career with 8 kills, 2 digs and an ace for Mendham. She led all players in kills for the winners. Junior Sarah Wilcock had her normal 5 star performance netting 10 assists, 5 kills and 4 aces. Poppy Skjonnamend was a demon on the block turning back the Bogota attack four times. The advance to play NJ’s only undefeated team the Williamstown Braves who are 35-0. Mendham has 4 losses but is just a hair behind the Braves in the NJP rating system. This will be an outstanding match.

Paul VI continued their dream season with a solid win over Newark Academy in straight sets. No letdown for the Eagles after the took perennial champion IHA off the board in the non-public group championship. Paul VI pounded 7 aces in the 2 set victory and Sadie Arasim, Zharia Harris-Waddy and Emily Ezeiruaka handling the majority of the attack. 7 digs for Megan Bischoff led the Eagles. North Hunterdon awaits them in the semi-final.

Saturday will have two great matchups of 4 of NJ’s best girls volleyball teams. You can’t ask for better than that…

NJP will make their selections tomorrow. There are slim margins on these games and we expect both to be three set possibilities.

Lots of activity on the NJP Clip of the Year voting. Group A getting a lot more activity so make sure to give group B some love before Sunday’s 5PM deadline. We have not limited voting this year so vote as many times as you like…

Our college commit page continues to build. Make sure to send all of your commitment info to njpowerranking@gmail.com. Updates here…

Our “Accolades” page has calmed a bit as the season winds down. We are now shifting our focus to our NJP awards presentation coming shortly after the season concludes. Watch for that one… it’s a monster!

We published a post yesterday on who the top players think will win the TOC Championship. Many of the players are choosing Williamstown with some votes for Mendham, NH, and Paul VI. So far, it looks like this…

Our girls high school player interviews have come to a conclusion for the year, despite having many pending invites and many in progress. A lot of the players have been so tied up with balancing academics and sports and many other things that its been a missed opportunity. For juniors and younger, we hope to resume this in the Summer.

We hope to keep in touch with many of the players as they continue their club seasons this winter. Don’t forget to keep us posted on your club activities and tournaments.

As Thanksgiving approaches, we will turn some attention to the upcoming NJ mens college teams and pre-season reports on all of men’s programs in the Garden State.

It should be another great weekend of girls high school volleyball. Just 3 games left in the season. Cherish them!!