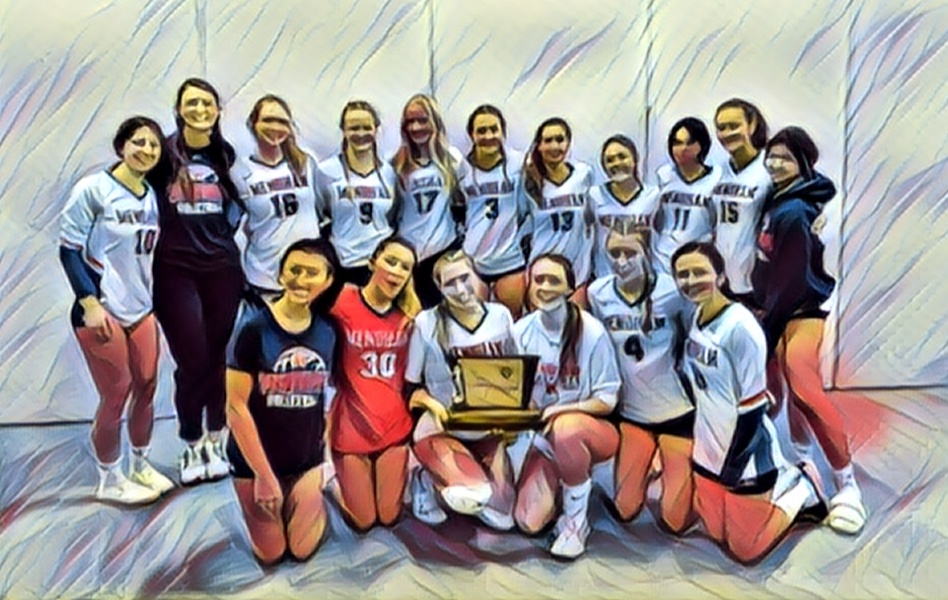 Fresh off of claiming their Group 2 title, the Mendham Minutemen hosted the Bogota Bucs in a 4-seed vs. 5-seed matchup in the preliminary round of the NJSIAA Girls Volleyball Tournament of Champions.

In the first set, the Minutemen and the Bucs traded points early on, until junior Sarah Wilcock came up to serve for Mendham. A kill by Wilcock, in addition to two service aces, helped push Mendham out in front by the score of 12-7.

Later on, senior Poppy Skjonnemond hosted a block party—one for which Bogota was not invited to. Skjonnemond knocked down two blocks in the late stages of the first set. Mendham took the first set by the score of 25-16 over Bogota.

Speaking of Poppy Skjonnemond, the senior was brought to tears before the match had even begun. Her grandparents had flown in from England earlier that day and arrived just in time for the game. Poppy’s grandparents mentioned that they stay awake until 3am England-time to watch their granddaughter’s volleyball matches—if that isn’t dedication, then I am not sure what is.

The Minutemen led the Bucs by four points when Mendham broke off a 5-0 run, grabbing a commanding 16-7 lead over Bogota.

From there on out, it was smooth sailing for Mendham. The Minutemen coasted to a 25-14 win in the second set, subjugating the Bogota Bucs.

“They [Mendham] always bring it on gameday,” Mendham head coach Greg Racz said, “We definitely played one of our best matches of the season against a very strong team.”

The Mendham Minutemen spread their offensive output very evenly. Senior outside-hitter Gabby David led the team with 8 kills, while Ania Trzesniowski added 6 of her own. Wilcock and Skjonnemond also chipped in with 5 and 2 kills, respectively.

When asked about how well Mendham distributed the ball, Racz said that “it definitely starts with the passing, we have so many offensive weapons,” he added, “It definitely keeps the defense guessing and it opens up things for our hitters.”

4-seed Mendham, with the win, advances to the NJSIAA Girls Volleyball Tournament of Champions semifinals. The Minutemen will face the top-seeded Williamstown Braves at 3:30pm on Saturday, November 20th. The match will take place at Franklin High School and will follow the conclusion of the North Hunterdon vs. Paul VI match.