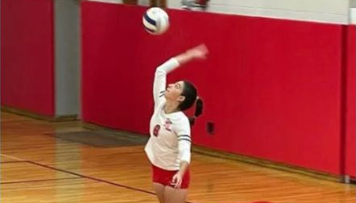 The season is off an running! We all thought it would never get here but be careful, before you know it we will be figuring state playoff match-ups.

We had some great matches on tap for opening night. What a performance by Samiyah Abdur-Rahim at MKA. Montclair-Kimberley edged Verona 2-1 and Abdur-Rahim was lights out. Story here at https://njpowerranking.com/2022/09/08/samiyah-explodes-leads-mka-to-three-set-win-over-verona/

North Hunterdon has such a strong program and following. Despite losing an absolute ton of talent and their three standout players to graduation, they just keep replenishing each and every year. Their straight set win over Hillsborough on opening night is a great sign for the NJP #13 ranked Lions. It was a team effort with 5 players with multiple kills, Colleen Russell posting 4 blocks, and Brooke Logar, Sam Wilton, and Emma Murry smashing three aces each. Logar, in her senior year, slides in as setter after an amazing career of Emily Wolters came to end last winter.

Great night for Carli Silverman of Ramapo as she smoked 12 kills and 3 aces in a three set Raiders win over Lakeland. Po was a terror on the service line with 12 aces for the match, 4 of which coming from the hands of Brielle Turner. Junior Maya Shah won the role of starting setter and put up 23 assists.

In the NJP Game of the Day, Union Catholic disposed of Kent Place in a very telling opening night matchup. The Vikings, with two of the best sophomores in NJ in Ryan Gorski and Rachel Williams, are staking their claim as a team to be reckoned with over the next few seasons. Gorski was outstanding today blasting 12 kills and 2 aces while also contributing 6 digs and 4 assists. Williams on the other hand had 10 kills and a block while also having an ace and 4 assists. Senior Caroline Evans jammed 9 kills on the night and freshman setter Alex Landazabal posted 15 assists and 7 aces. UC could be headed for the top 10 with this very strong performance.

NJP’s #3 Player in their preseason Elite 80 series Brookelyn Talmadge had 12 kills and a block as Immaculate Heart started their season off with a bang as they demolished Demarest 25-8, 25-11. We expected Demarest to be a top 10 team all season and are more inclined to think this match is a reflection of IHA’s strength rather than Demarest’s decline. Kalena Stavish is a premier setter in NJ and she played well today posting 26 assists. Abby Romero took charge of the back line contributing 9 digs for the Blue Eagles. Let’s not forgot the absolutely historic win streaks and success IHA has had for year under the leadership of Maria Nolan. This team will be looking to return to their dominance and we expect them to be a well oiled machine come mid season (or now it appears).

Sparta took care of business convincingly against Mendham this afternoon. Sparta is in our preseason Top 5 for a reason and are stacked with talent. They used 14 players today and held the Minutemaids to just 17 points over 2 sets. Mendham is really feeling the effect of losing Sarah Wilcock to beach and may struggle in the NJAC based on the spread today.

A fantastic win for West Morris Central as they knock off Roxbury in their opener. Rox is considered one of the NJ elite in the NJP top 12 for preseason rankings. Ava Novello and Lily Bernecker drove the offense and Angelina Mauro, Katelyn Poggi, Juliana Stingle, and Kaitlyn McNally all contributing to the victory and upset.

Do not underestimate Tenafly this season. They return their entire squad from last season, although it is such a limited roster. Barring any injuries, this team will be close to the top of the overall NJ rankings. Today, they disposed of Teaneck in straight sets with senior Sofia Bell popping in 7 kills and setter Meghan Koehler posting 15 assists.

Lots of great performances tonight by incoming freshman. We wanted to highlight some of these performances as I am sure we will be hearing these names often over the next few years. It’s such an honor when a freshman makes a varsity roster. Freshman account for less than 8% of total rosters in NJ. So its always a big deal when standout players are in their very first season with their school. 17 freshman were on the statistical score sheet tonight at the time of this blog. Let’s pick out some special performances…

Camilla Dong of Livingston posted 9 kills and 8 digs for the Lancers while Harrison’s Julia Soares had 7 kills, 5 digs, and 2 aces. MSDA’s Ariana Rivera had 4 aces in her first match. And Sofia Guzman of Secaucus had 10 digs, 4 kills and an ace. There were also 3 other freshman from Secaucus who got on the board tonight so Secaucus appears to have a bright future. We would also like to recognize freshman Alex Landazabal from Union Catholic mentioned above, Gabia Grigaliunas (Howell), Genevieve Millett (St. John Vianney), Shayla Maemmerle (Lacey), and Grace Chiafullo (Jackson Liberty) who made positive contribution toward their teams efforts today.

We would also like to recognize senior Madelyn Faber of Saddle Brook as she posted 8 blocks in her schools win over Lodi.

Let’s call out some big “killers” from tonights matches. Jefferson got some dynamite from Amanda Nwankwo who had 16 kills.

Gabriela Imburgia from Fair Lawn got off to a great start with 14 kills and a Cutters win. Audrey Sousa contributed 13 kills for Freehold Borough in their big 3-set win over Howell.

Montgomery upset Ridge tonight 2-1 in a Skyland matchup. It’s a huge win for the Cougars program who came in ranked #120 in NJP’s preseason analysis. It’s the first time in 7 years that Monty has beaten Ridge!! Congrats to the Cougars!!!

It is impossible to report on every game and every great performance so please be patient over the season as we prioritize our nightly postings.

This is just the beginning. Congrats to all of todays winners.