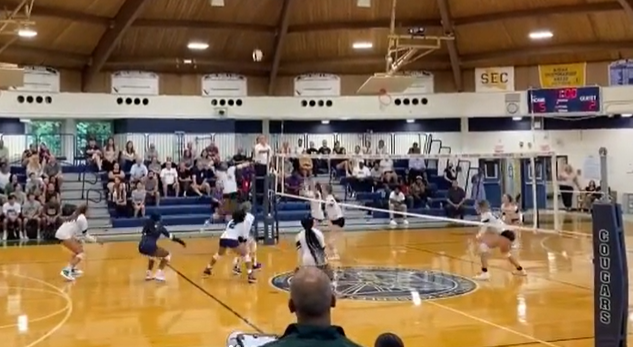 There was opening night fireworks as the Cougars from MKA got an amazing performance from senior outside Samiyah Abdur-Rahim, the NJP #2 player in their preseason ratings, to drive a three set win over league rival Verona. Over the three sets, the TCU Volleyball commit slammed 23 kills while lifting 25 digs in the match. She also had 6 aces in a clear statement that she will be a top candidate for NJ Player of the Year.

MKA was taken down in the first set as the Hillbillies went to extra time with a 27-25 win. But it was all Cougars in the second set in a solid 25-11 whooping. The third set seemed to close to call early and MKA driven by Abdur Rahim’s stellar showing broke away to secure a 25-22 third set win.

The SEC American is stacked with defending Champs Newark Academy having to contend with an outstanding MKA squad, a rising MSDA team with Bridget Lonergan in her senior campaign, and Verona and Livingston, both top 40 squads.

MKA seems perfectly positioned for Fall 2022. Samiyah is a standout player and is teamed with another phenom in Hailey Fouche. Fouche showed her defensive capabilities in the opener tallying 18 digs and 2 blocks as well as 4 kills, 4 assists, and 2 aces. The 1-2 combo is as good as any in NJ.

This was new Head Coach Kennedy Robinson’s first win as she took over the program for this Fall. According to the MKA website, Coach Robinson was one of the most decorated players in program history and was named a 2x Essex County “Player of the Year” in 2015 and 2016. She led the Cougars to the program’s first-ever Essex County Volleyball Championship in 2015 and went on to play at the University of Alabama.

Sounds like a perfect storm for MKA in 2022. Stay tuned…