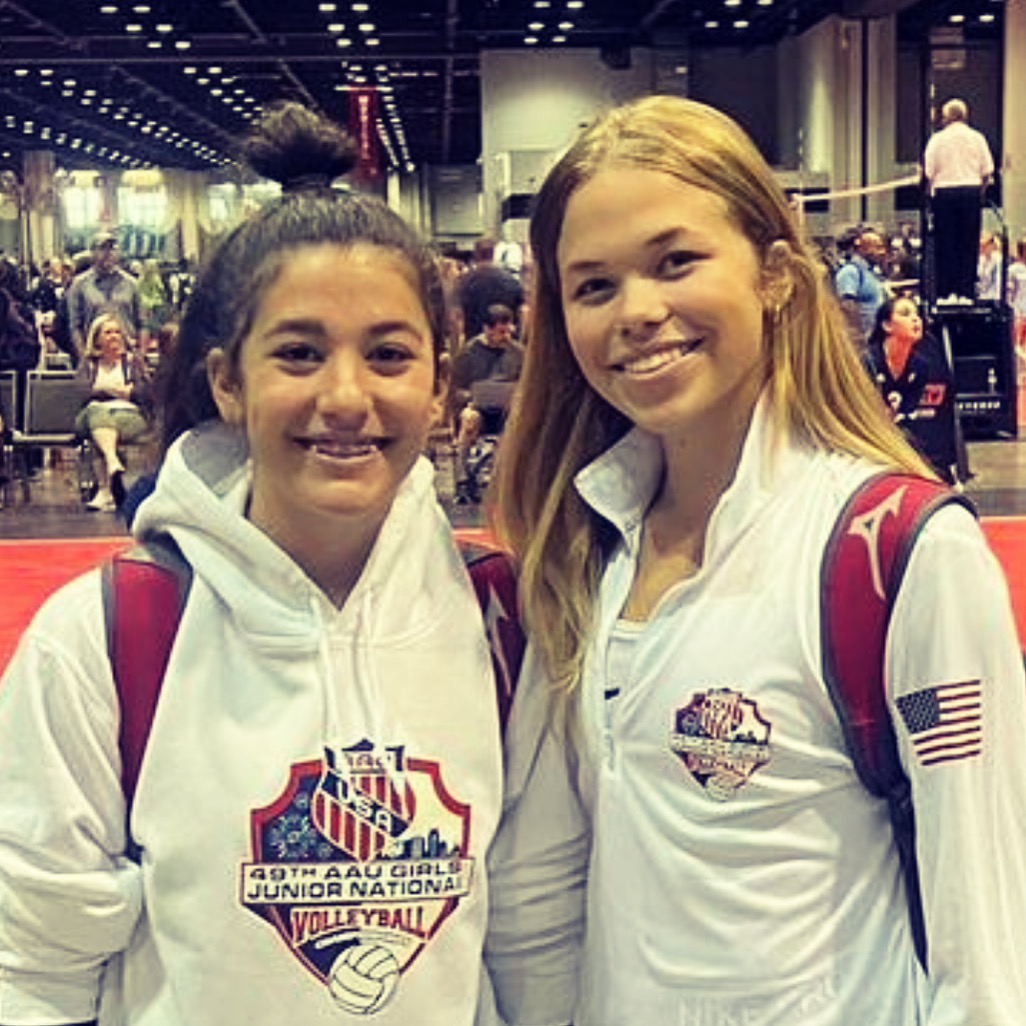 We have accumulated enough data to start looking at some interesting items for the upcoming season. Tonight, we evaluate sister combinations on NJ high school volleyball teams. With over 325 teams, we figured we have at least a few combinations. What we found was a bit astounding. We actually have over 50 sister combinations on teams in NJ. We have 3 sisters on a few teams. And we have multiple sisters on one team. Pretty crazy. So now we start a new review of who are the top sister combinations in NJ high school volleyball. The complete list is shown below based on our research. These are based on players who currently have any stats. So there may be a sister who has yet to accumulate a stat. But, if we missed any, give us a heads-up at njpowerranking@gmail.com.

The Atkins sisters of Morristown are one of the 3 sister combinations in NJ. A fourth sister graduated this past season. There are also the 3 Guerbi sisters of Union and the 3 McHale sisters of Weehawken. Multiple sister pairs are on Mendham. We will monitoring these sisters combo’s throughout the season and making a section of yearbook on the best sister combo’s in NJ so stay tuned. Here is the complete list based on the criteria above…

A monster schedule tonight with almost 100 games on tap…

We are going to start in Tenafly where to Tigers improved to 2-0 with a very solid straight set win over Demarest. The Tigers are one of the only teams that returned their entire varsity lineup with no graduates after finishing in the NJP top 20 last season. Sofia Bell continued her outstanding senior campaign with 9 kills and Rylie Theuerkauf added 7. Sofia Tapia had 2 blocks and also added 5 kills while Morgan Koehler added 19 helpers. Demarest with 2 superstars Taylor Miller and Gianna Galli have lost three straight but losses were to IHA, Pascack Valley, and now Tenafly as they stacked a brutal level of competition early in the season. The Norsewoman have no pushover this Saturday when they face the high flying Verona Hillbillies in a morning matchup.

Summit handed Rahway its first loss of the season in a three set thriller on the Hilltop. Rahway came out of the gate strong dealing Summit a 25-15 first set setback but it was all Hilltoppers from then on as they took the second set and then held off Rahway’s late charge to escape with a 26-24 third set win. If you have not seen Vivian Roberts yet she is just a super athlete and a real star for Summit. She had 14 kills today as well as 6 aces and 16 digs. Hannah Barlow and Alison Wauters combined for 15 kills on the attack and Zoe Zacharias had 30 big assists for the winners. Ashley Pinedo-Herrera had a great effort in a losing cause with 7 aces, 10 assists and 12 digs as well as three blocks.

Great effort by SPF tonight as the hand Union Catholic their third loss in a row after opening the season 4-0. It was a 3-set barn burner in Scotch Plains. Morgan Kinard was relentless on the attack firing 13 kills for the Raiders. Leah Stevens put on a show at setter garnering 32 assists while also contributing 2 aces, 2 blocks, and 5 digs. Danielle Kramer put back 5 blocks and also contributed 5 kills. Haley Warren and Abbey Balagot combined for 13 kills and 13 digs while Chloe Schunke blasted 5 aces for the winners. The Smashing Sophs from Union Catholic, Gorski and Williams, combined for 22 kills, 4 blocks, 8 digs and 3 aces but it wasn’t enough to keep UC on top.

Do my eyes deceive me? Looks like one of NJ’s best libero has moved up to outside hitter for Colts Neck. Maddy McSorley had 7 kills in addition to her typical amazing back row play (11 digs), Alex Foley pummeled 10 kills and 2 aces, and Sophia Koval had 22 assists and 5 aces as Colts Neck remained unbeaten with a straight set win over Marlboro.

Barringer is now 4-0 after taking down previously unbeaten Payne Tech in Newark today. Mia De Leon was the star in the attack with 7 kills and 3 aces for the Blue Bears. This is the best start for Barringer since 2012.

Livingston is now 4-0 with a well rounded three set win over previously unbeaten MKA. The Cougars deployed their two major weapons, Samiyah Abdur Rahim and Hailey Fouche, who amassed 21 kills, 6 blocks, 24 digs and an ace combined, but it was the Lancers who took the third set 25-20 in front of a stunned MKA home crowd. Livingston got multi-kill performances from 5 players with Shannie Su and Nadia Ahlwat leading the way. Cadence Sturt led all Lancers with 10 digs and also popped in 4 aces for the winners. No slowing down for the Lancers as they face a tough Piscataway team from the GMC and then will travel to league rival Verona on Friday.

Manasquan got their first win of the year with a straight set thumping of Red Bank Regional. Nice showing for Giuliana Ferraro who notched 5 aces, 7 kills and 3 blocks for the Warriors.

Another big game for Bridget Lonergan as MSDA takes care of Newark Academy in straight sets. Both teams settle in at 2-2. Lonergan with 11 kills, 2 blocks, 3 digs and an ace for the Lions.

The Big Red from Lawrenceville always have a great squad and solid talent. Today they picked up their first win of the season in their opening match against St. Benedict’s. Benedict’s hung close in both sets but were dealt their first loss of 2022 after opening at 3-0. Benedict’s is obviously much improved and better than our preseason ranking.

After a rough first set in the Wayne Hills gym, Fair Lawn came back strong and won going away in their Big North match-up. The Cutters are now 4-0 and the duo of Ash Kingsley and Gabriela Imburgia look unstoppable. They combined for 33 kills, 6 aces, and 23 digs tonight. Not too shabby!

Paul VI staved off a spirited effort from Rancocas Valley to win in straight sets 25-23, 25-17. The Blue Eagles are off to a 5-0 start and have picked up right where they left off last season.

Old Tappan bounces right back after losing to IHA this week with a solid drubbing of previously unbeaten Pascack Valley. Layla Giordano was one of the stars for OT today posting 4 blocks and 4 kills. Both teams are now 2-1 on the young season.

Junior Reese Peterson broke out with the best game of her career as River Dell defeated Ramsey in straight sets. Peterson had 8 kills, three aces, and 7 digs for the Golden Hawks who move to 3-0.

Here is the current statistical download as of tonight at 9PM. Tonight, we sorted by kills but other nights we will rotate categories.


As the season progresses, headcount of varsity players participating across the state continues to rise. Here is the latest census info…