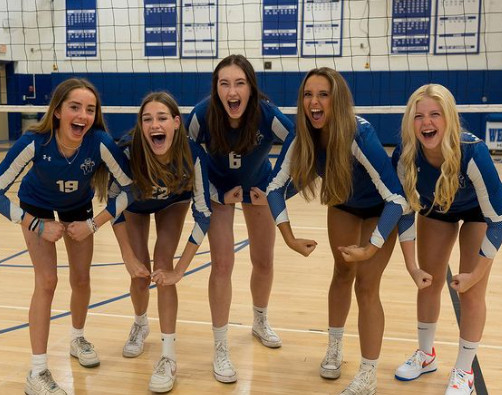 It was an incredible “First Tuesday” for the NJ Girls high school volleyball season. More upsets and outstanding performances… its been a great season thus far and we are not through the first week… we will continue to update the blog as the night continues so stay tuned and check back often…

Do you know this latest “Face of NJ Volleyball”? Check out all of our daily posts to see if you are part of the surprise honor as we showcase our NJ volleyball heroes…

We will start tonight with a big shout out to the Westfield Blue Devils… Westfield remained unbeaten on Monday and knocked Union Catholic from the unbeaten ranks. The UCC looks like a dogfight this season with so many solid teams vying for league honors. Tonight, Union Catholic took another blow losing a squeaker in two sets 26-24, 25-23 in a matchup of two very strong teams. Marley Kramer has been off to a great start at setter and all-around versatility and Patricia Rakova has been leading the attack for a Hillbilly team that is now 3-1 after losing their opener to MKA.

Washington Township continued their winning ways tonight and had no let down after their thunderous upset of #2 Williamstown Monday. They took two sets to hand Cherokee their first loss of the season and made short work of the Chiefs limiting them to 29 points in 2 sets. Nina Cleary spread the offense tonight with Bella Dulude, Ciana Bonatara, and Tori Capone contributing 4 kills each. WT continued their onslaught on the service line with 13 aces, with 3 each from Bryn Batista and Cianna Bonatara,

Lodi Immaculate Conception is unbeaten after three games winning tonight over Hasbrouck Heights in straight sets. The Blue Wolves were dominant, holding HH to just 4 points in the second set as the team drilled 17 aces, 10 of which coming from junior setter Anastasia Pesantes. Sydney Kropiewnicki had 6 kills and Noelle Savonije had 4 blocks and 4 kills for the winners.

Immaculate Heart Academy appears to returning to their dominance from the last decade and beyond as they struck down Old Tappan in straight sets. The 3-0 Blue Eagles always take on a heavy schedule of top teams which is usually reflected in the NJP algorithm loving them in the rating system. We are still a week away from launching any calculations but we would not be surprised to see IHA near the very top in NJ. Brookelyn Talmadge ripped 15 kills and an ace while Kalena Stavish had 27 helpers for the winners. Abby Romero was a star on defense with digs.

Rutherford was nipped today by North Arlington in a tight 2 set match that needed extra time in each (26-24, 27-25). Grace Alho had 6 kills and Jenna Kane had 15 assists for NA. Alho and Rhi’Anna Gomez had 4 aces each and Sara Silva had 2 blocks and 4 kills for the winners. We expected Rutherford to continue their winning ways this season so this was a definite surprise. Kudos to the Vikings!!

Donovan Catholic has had a superb start to Fall 2022 with a tournament win under their belt as well as winning their first two matches. Today they disposed of Lacey Township in straight sets but did get pushed to the limits in set 2. Junior Shantel Starling has emerged on to the varsity squad after dealing with injuries the past two seasons and has been a standout. Today she whacked 9 kills and lifted 4 digs for the Griffins. Julianna Williams and Macayla Lindner had 3 kills each for Donovan while Brooke Bowliss added 5 aces.

Great match of BCSL powers Notre Dame and WWPS today in West Windsor. Maia Cinca had 5 blocks and Cassady Smith had 5 kills for the Irish as they took a tight two set win. Christina Lenzo had 14 assists and Alyssa Jennings had 4 kills for ND. The Irish are now 2-0 and off to hot start.

Secaucus returned to its winning ways after dropping a match to Big North power Fair Lawn with a straight set win over Lyndhurst. Nicole Rocha and Sofia Guzman lead the attack today and Amaya Ocasio had 5 aces for the Patriots.

Another 10 kills added to Ashanna Caviness’ resume as #1 Bogota moved to 3-0 with a win over Palisades Park. The Bucs held Park to just 20 overall points over 2 sets.

The battle of Princeton was rather one sided as Princeton high school improved to 3-0 with a straight set drubbing of Princeton Day School. Princeton freshman Naomi Lygas continues to excel at the varsity level adding 10 kills and an ace today. Another superb showing by Lois Matsukawa with 13 assists and 3 aces, and Sarah Villamil with 8 kills and 4 digs.

North Hunterdon got put to the test today against Watchung Hills as they were pushed to three sets and edged out a 25-23 victory in set 3. Colleen Russell was dominant for the Lions with 11 kills, 3 blocks, and 4 digs. Emma Murry and Sam Wilton combined for 28 digs on the back line for NH.

Demarest at Tenafly, Governor Livingston at Kent Place, Livingston at MKA, Sparta at Jefferson, BR at Roxbury, River Dell at Ramsey, Rancocas Valley at Paul VI, Marlboro at Colts Neck. Any NJ high school volleyball games is a big game so pick your favorite and head to the game or catch the action on live stream.

See you all tomorrow…