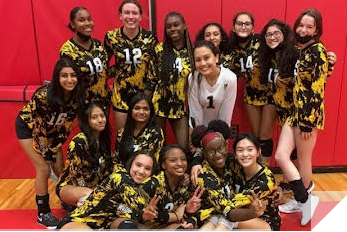 Governor Livingston got 9 kills and 4 aces from Abby Kim and improved to 4-0 on the season with a straight set win over New Providence. The UCC has been so competitive this season but Governor Livingston remains undefeated along with Westfield, Roselle Catholic, and Johnson.

East Brunswick remains undefeated and survived a good test tonight from WWPS. The Pirates feature one of NJ’s biggest stars in Sibana Gonzalez and have a load of talented young ladies on the roster including Maria Theruviparambil, Gauri Lavate, Mrudula Pamireddy, and Jayda Frank. Sibana went wild tonight with 18 kills, 13 digs, an ace and a block. Maria was outstanding as well with 12 kills, 14 digs, 3 aces, and 14 service points. Gauri Lavate had a monstrous 28 digs. But it was not enough to stay ahead of ahead of a very strong Bears squad who had some stellar performances of their own. Joyce Zhang had 11 digs and Kasey Trzaska matched that while also contributing 10 kills and 3 aces. Abby Wolfe lead all Bears with 11 kills while Julia Gawel notched 24 assists. A third set was needed but EB pulled away at the end with 25-20 final set win. The Bears take on the Knights of Old Bridge on 9/28 which could be a very important game for both GMC rivals.

Demarest got their first win of the season tonight after dropping their first three matches. Don’t underestimate the Norsewomen as they demolished the Highlanders in an effort to get back on track with their season goals. Junior Taylor Miller was her usual outstanding self notching 13 kills, 5 aces, and 6 digs to lead her team in all three categories. Netta Saban added 6 kills and 2 blocks and Gianna Galli also had 2 blocks and 2 kills. Demarest’s tough schedule continues tomorrow vs Verona.

Speaking of Verona, they ran into a red-hot Livingston Lancer team today and dropped a three set heart-breaker. Livingston survived a three set rivalry match that ended 25-23 in the third. Freshman Camilla Dong crunched 10 kills and 2 aces and Nadia Khalaj added 9 kills. 23 assists for Isabela Ubrig and Anika Dhar had 2 blocks and 7 kills for the winners. Livingston is distinguishing themselves as the cream of the SEC crop.

Notre Dame remains undefeated after handing previously unbeaten Delaware Valley their first loss of the season. Sophomore Cassady Smith was sensational for the Irish with a career high 11 kills. Both Alyssa Jennings and Maia Cinca added 7 kills with Maya getting 2 blocks as well. Monday’s game against Princeton should be a heart-stopper as both teams are expected to enter the match without a loss.

It seems like every night brings a big match at the Shore with tons of quality teams and many cross town rivalries. Tonight, Donovan Catholic remained undefeated with a straight set win over a very high quality Toms River South squad. Macayla Lindner continued with her hot hand slapping 10 kills and lifting 7 digs. Donovan is one of those programs that despite losing some major talent to graduation, they just keep having stars waiting in the wings. It could be the year of the Griffin based on what we have seen thus far.

Angelina Buhler continues to emerge as an amazing compliment to Ashanna Caviness at Bogota. Ange and Ash had 12 and 10 kills respectively tonight as #1 Bogota smooshed Saddle Brook in straight sets. Madelyn Faber was a bright spot for the Brook with 2 blocks, 3 kills, and 3 aces.

Fair Lawn remained unbeaten at 5-0 with a straight set win over Hackensack today. The powerful duo of Gabriela Imburgia and Ash Kingsley have proved insurmountable for Cutter opponents this season. The sisters from different mothers combined for 20 more kills today.

Chatham is undefeated this season and squeaked out a slim win over Morris Hills with both sets going to extra time 30-28, 27-25. The Cougars won with defense tonight lifting 66 digs on the night. Julia Bardecki lead Chatham with 20 digs, Natalie Yacykewych had 16, and Liza Kelley had 15. Liza also led the Cougars with 9 kills.

Nice effort by River Dell today as they improved to 4-0 with a one-sided victory over Old Tappan. Alicia Idiculla and Erin McCabe had 9 kills each for the winners. River Dell held OT to 11 in the second set.

Holy Angels improved to 2-1 with a win today over Fort Lee. Fort Lee actually outscored the Angels on the day but lost in three sets. Olivia Papp had 19 digs and 4 aces while Kaitlin Brady lead all Angels with 6 kills. Catherine Tuohy contributed 5 aces and 5 kills for the winners. IHA is coming up on the schedule for HA on 9/20.

MKA with another convincing win, this time over Newark Academy in straight sets. It was NA’s third loss of the young season. MKA improved to 4-1.

Brynn McCurry had 9 kills and Aralyn Saulys slammed 4 aces as Sparta outlasted Mount Olive to stay undefeated. Sparta appears to be staying in conference for most of their games so we can expect the winning streak to continue.

Cherokee’s Brooke O’Prandy will be heading to Kean University next fall. Congrats Brooke!!