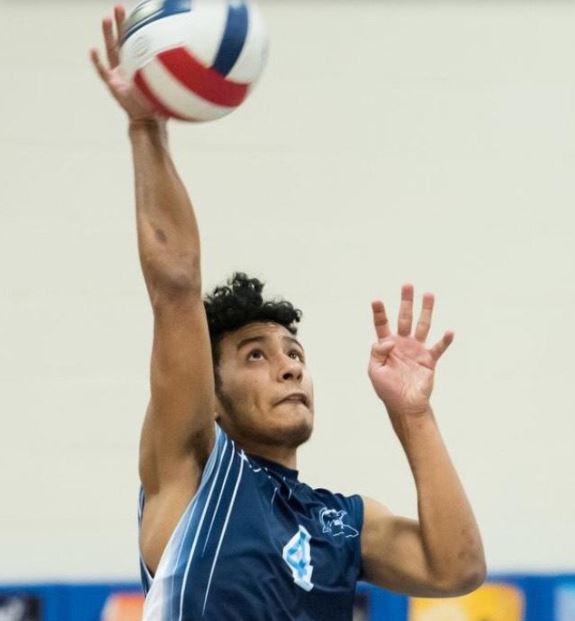 Ray Ugaz has a lofty goal for the Blue Tide’s Volleyball team in 2020. As he tells us “Losing is not an option!”. As he enters his senior year, Harrison will look to replace 6 starting varsity graduates. But Ray does not appear phased. Harrison will use its senior core of Ray, Freddie Marchitto, Leader De La Cruz, Ulises Rodriguez, and Aidan Samoyoa to power this years squad. And as always, Coach Landy will have a cast of upcoming talent rising to the varsity level that will drive their success.

Harrison loaded their schedule last year and finished 22-11 and earned an end of year ranking of #16. Ray was one of their most versatile players with 139 digs, 151 kills, 22 aces, and 116 service points. Ray’s leadership should not be underestimated. We fully expect Harrison to be a top 25 team.

We love Ray’s spirit and attitude. His family roots drive his passion toward volleyball and he will start to build his own legacy for the future.

Here is our interview with Ray…

Tell us a bit about yourself Ray?

I attend Harrison High School and live in Harrison with my mom and grandfather. My graduation year is 2020 and currently maintain a cumulative GPA of 4.2.

I’ve been playing volleyball since I was in 8th grade.

What inspired me the most to play volleyball would definitely be my mother. My Mom was a top player back in her home country of Peru and her aspiration was to one day have me play volleyball. I tried it out and fell completely in love with it. Now my main focus is volleyball at this point in my life.

My friends always have my back and come out to support the team as much as they can which is a great feeling. But the main support group is my family. My mother and grandfather, no matter what, always attend our home games and if they had a way to get to the away games they’d probably be there too.

I think we have a chance to go real far this season, this is one of those seasons where I feel that failure isn’t an option. We have a couple of players returning but we’ll have to find replacements for the loss of our setter, opposite, and middle. With those positions being filled, our squad will be on the right track. Our main focus will be to play solid defense and capitalize when we can offensively to be successful this year.

Harrison High is a small school but is very diverse and welcomes anyone into the community. Everyone here treats each other nicely and is a friendly environment.

Our coach is Nick Landy. He’s one of those coaches that’ll never bring their players down, which is key whenever we go down. He helps us keep our heads up high. Alongside our other coach Anthony Sabia, they work us hard to prepare us for everything.

Our team gets the opportunity to go to as many open gyms throughout the offseason to be able to prepare for the upcoming season.

What is your favorite inspirational video that you like to watch before the games?

I think it’d have to be Mark Berry from Fair Lawn. He’s one of those all around players that kill us with his height on the block, ability to get around the block, and pass the ball.

I do plan on playing in college and looking to hopefully play at Ramapo, St. Francis or Kentucky State.

Definitely Kearny, Ridge, and St. Peter’s Prep. Kearny is always a rival, no matter what sport it is, and Prep has recently become a rival since the various encounters we’ve had are close games that sometimes we believe we should win. Ridge is our most heated rivalry as they’ve taken the sectional title dream from us every single year I’ve been in high school.

My favorite story will be holding up the sectional championship trophy and going on to the state final having a very intense game and taking the title home, back to Harrison.

How do you manage your time when playing a varsity sport?

I handle it like regular exercise time to be honest. I practice and have games but get home and get right on my duties like homework and chores, no matter how long it might take me because although I might love volleyball, school does come first.

I love to play video games and take pictures, whether it’s with a camera or my phone.

I played Club volleyball at CJVA last year but I play other varsity sports to maintain in shape. However, when I have free time, I tend to watch professional volleyball games.

I’ve played Football and soccer in the past for my school, however, I recently did Cross-Country and I’m currently playing Basketball.

My favorite pro volleyball player would have to be Jenia Grebennikov of France. The way he moves around the court, picks up any ball, and the alertness he has just brings the “wow” out of me, making it someone I look up to.

Although I may be a leader on the team, I’m actually a very quiet person and don’t really stand out too much. I kind of keep to myself half the time.

My favorite teammate would have to be Andres Toro due to the fact that he brings so many laughs during practice and games but also hyping the team up when we play well. No matter what situation it is, he tends to try to bring the team up and that’s what I love about him.