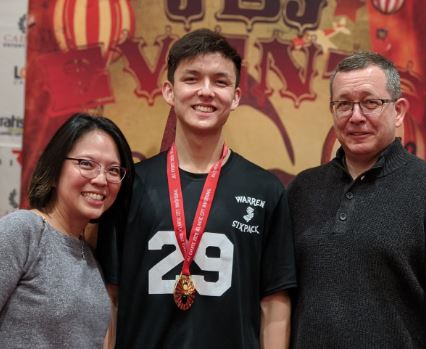 According to the NJP database, only 4% of NJ high school volleyball varsity rosters have a freshman. Finding an impact freshman feels like looking for a needle in a haystack. But Chris Lynum of Livingston put up significant numbers for the Lancers in 2019 and he clearly distinguished himself at the top of the 2022 class.

With 123 kills in his first year, he bettered freshman totals of elite players like Liam Maxwell, Elan Dorkman, and Piotr Namiotko. So to say he is off to good start is a major understatement. Livingston had a good season last year. They finished 15-12 and have 10 varsity players returning. Many of them are club players in the winter and they earned the #13 spot in NJP’s preseason ranking. Preseason report at this link: https://njpowerranking.com/livingston-2020-psr/

With young players like Chris, and improved contributions from seniors Jaden Ly and Jonah Liu as well as junior Zach Choi, they will be well positioned for an improved campaign.

Chris is playing Warren Sixpack 16-1 with many other top freshman in the state such as Nick Brzoska (Marlboro), Andrew Sasso (CBA), and David Flores (Old Bridge). This team was a recent winner of the AAU Atlantic City Invitational tournament which included top teams from NJ, Maryland, Massachusetts, Pennsylvania and Connecticut. Chris continues to improve by playing top talent and we expect his sophomore year to be a real breakout season.

Here is our interview with Chris…

Chris…Tell us a bit about yourself?

I am in the Class of 2022 at Livingston High School, and I live in Livingston, New Jersey.

I have been playing volleyball since 7th grade, but got seriously into it in 8th grade.

When I was in 7th grade, I hadn’t participated in any sports prior to my friends telling me to tryout for the volleyball team because I was taller than most in my grade. 8th grade is the time when I got hooked on the sport because it was all I wanted to do.

My parents are definitely my support group because they are the reason why I am able to be a part of a club team, and make the long drive to practices. I wouldn’t have any of the opportunities in front of me if it weren’t for their support and commitment to my passion.

Our high school team will have a good chance at winning our counties, and going on a run in sectionals. We have most of last year’s players returning to the team, but we lost our middles who were our keys, so this year we are going to have to focus on playing defense without a big block.

My team grabs meals together often, so it really helps us bond and get ready for the upcoming matches.

We had played Old Bridge at the Bloomfield Tournament, and I remember Josh DeWitt not letting close to any balls drop in front of him.

One of my goals is to play competitive volleyball in college. I hope to have the opportunity of playing at Stevens Institute of Technology.

Our rivals this year are going to be Payne Tech and Bloomfield. While we are in a weak conference, these teams are full of dedicated athletes and coaches that will test us as a team.

I am playing on Warren Six-Pack’s 16-1s team, and I go to the gym often with my friends to stay in shape.

I love the NJP TV section because watching other players’ highlights is interesting to me.

My favorite professional volleyball player is Yuji Nishida because he is only 19, and has competed in world league matches. His explosiveness and versatility as a right side hitter is amazing to watch.

My favorite teammate is David Flores because he never fails to bring the team together, put up an amazing set, and get us all going. He is a teammate of mine that I don’t think I will be able to forget because it’s not often that you meet someone as genuine and talented as him. I’m extremely fortunate for having him on the same team as me.