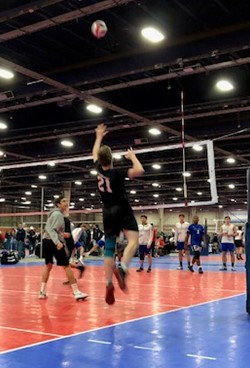 Jonathan Bernstein has already positioned himself as one of the top players in NJ High School Volleyball. He has played top level club and his high school stats and all around play have been top notch. Jon is a force! He can dominate a set no matter who his opponent is… and JP Stevens will look to him as a senior to again lead the Hawks to a state playoff qualification.

This season, JPS loses 12 seniors to graduation and will need to rebuild the team from the ground up. However, the Hawks are known for having a deep JV team filled with Club players who are ready to step up and contribute. NJP Preseason report at this link: https://njpowerranking.com/jp-stevens-2020-psr/

Jon will be the key component of this team. As a junior, Jon had 248 kills, 19 blocks, 138 digs and 23 aces. His athletic ability and 6’5″ frame have enabled him to continue to improve and his senior year could set him up as a NJ High School Player of the Year candidate.

This winter, Jon has been a steady presence on NJ’s best Club team, the Warren Sixpack 18-1 squad. We predict this team will perform well at Nationals in June and continue to represent NJ Volleyball at the highest level.

Here is our interview with Jon…

Tell us a bit about yourself Jon?

I am currently a senior at JP Stevens high school in Edison NJ. I am a part of the class of 2020. I love to hang out with my friends and go to an open gym and play around.

I played baseball and I got really bored of it so I wanted to try something new. I saw volleyball and it appeared to be fun so I tried out and I made the switch.

I believe that this year we will be a lot better as a team because last year we did not have chemistry from the beginning. This year our chemistry will be amazing which will help our team improve and win more games. We only have 3 returning players so we will be a whole new team but I would not count us out just yet. We should be a very tenacious team.

Coach White is such an incredible coach. He has been around the volleyball scene for many years and he has such a vast knowledge of the game. He has been able to lead us to multiple GMC finals. Along with winning a few, I know that with his knowledge and our team this year we will definitely be special.

My parents are my biggest supporters. Neither misses any of my games..

Any High School team that has players from my club team (Warren Sixpack) is a tough competitor during the high school season.

St. Joe’s Metuchen and Old Bridge are probably the 2 biggest rivals and of course Edison High due to the fact that they are also from Edison.

Playing for my 16U team at Six Pack at a bid tournament in Rochester NY, we were down 24-17 in the first set. I was serving and my coach told me to only use the jump serve. I was able to knock down 9 straight serves, and we won both the set, and match against a far better opponent. We then went on to win the Silver division.